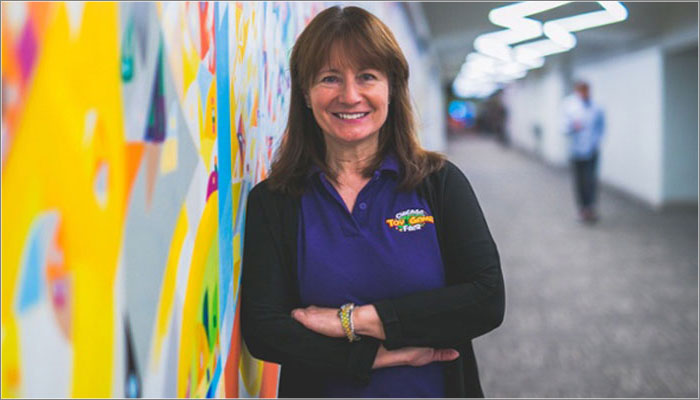 The annual event is a forum for toy inventors and manufacturers to get together informally during the UK Toy Fair, and the I.D.I.O.T award – first launched in 1988 – is given as a tribute to luminaries who have made outstanding contributions to the toy industry.

Mary got her start in the toy industry designing toys and games as an independent inventor, both self-producing and licensing, then turned her efforts to celebrating and helping toy and game inventors with the Toy & Game Inventor of the Year Awards (the TAGIEs), Toy & Game Innovator and Inventor Conferences, the Young Inventor Challenge and the Chicago Toy & Game Fair.

ChiTAG’s Inventor Conferences and Awards are the largest in the world, and the Chicago Toy & Game Fair is the largest public toy and game fair in North America. This November marks the event’s 17th year.

Elsewhere, this year’s Toy Inventors’ Dinner also saw Tricky’s Geoff House and So Sound win the WITTY (Winning Inventor Toy of The Year) Prize for Identity Games’ Tweet Beats. Now in its 7th year, the WITTY Prize is presented to the inventor(s) of a product introduced in the preceding year and judged by Inventors’ Dinner attendees to be the most exciting or inventive.

Every year, the event selects a charity to raise money for on the night. This year saw £2066 raised for CLIC Sargent, a charity that fights tirelessly to stop cancer destroying young lives.

For more information on the Toy Inventors Dinner, drop the committee a line at billy@mojo-nation.com