Gray Matters Games’ Joe Barron on the power of asking ‘Could this be a game?’ 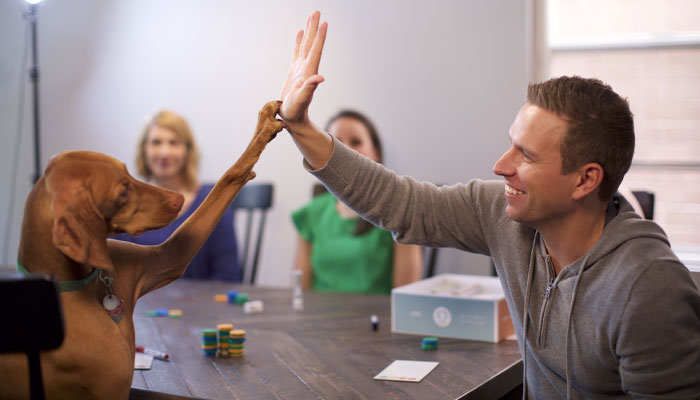 Joe, I’m delighted to catch up. To kick us off, how did you find yourself designing games? Was it always part of the plan?
It was not! I grew up in the upper peninsula of Michigan, which is a pretty remote area of the country – with long winters! I played a lot of board games as a kid and always loved it, but I actually had a career for 12 years in corporate America. I did corporate strategy and M&A, working very long hours…

Games entered the picture because we were on a family road trip through the desert of Arizona, and my family needed entertaining! I came up with a game where you place bets around how many things of a certain subject you could name. That became our first game, You Bet-Cha!

It was never really about starting a company. I printed out some cards at FedEx and played it with a few people. They said “You should make this into a game!” Eventually, we tested the water with a Kickstarter and that funded – we haven’t looked back since! That in 2017 and we’ve just published our eighth game. 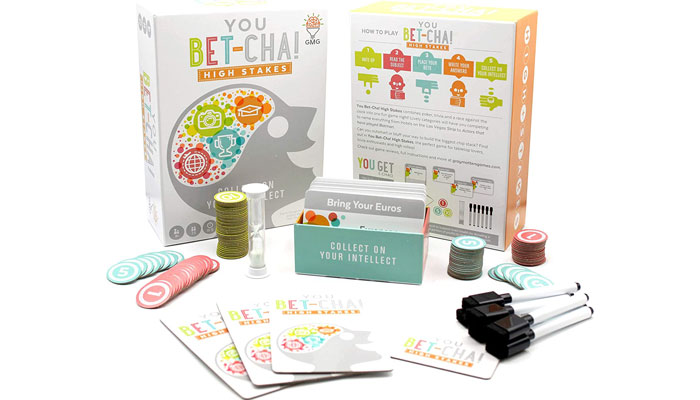 So the advice for anyone in corporate America looking for a way into the games industry, head to the desert!
Exactly… Long drives, long walks, that’s the key!

And the company name, Gray Matters Games… What’s the story behind that?
Well, we donate a meaningful portion of our profits to the Alzheimer’s Association. Both of my grandmothers passed away from the disease. It’s a terrible thing that most people have experienced through a family member or someone they know. We wanted to find a way to do good with our business. But that’s the link with the company name.

A fantastic cause to be raising funds for. Are there traits that all your games share?
We want to create games that are fun for the whole family. If inventors pitch us ideas, that’s the first hurdle a concept has to get over.

On that, when did you first open the doors to inventor submissions?
We launched our first licensed game last year, called the Root Beer Float Challenge. It came from two local Chicago inventors and it’s been our bestseller in recent times. It has unique packaging… People are intrigued when they see the can. It’s full of good challenges and family fun. It’s one of the games that creates memories you’ll talk about forever. 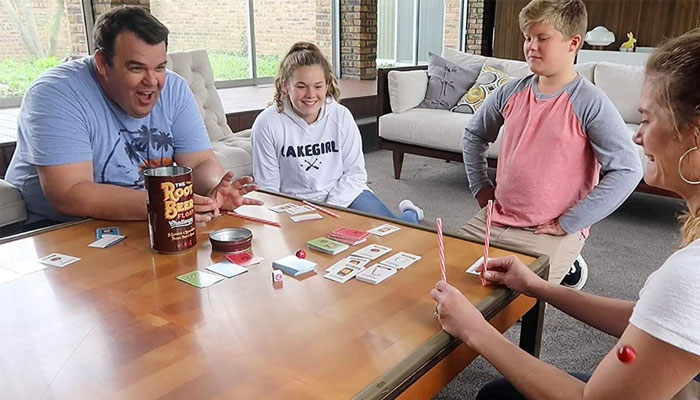 Great! And what prompted you to embrace the inventor community?
Well, I’ve run out of good ideas! Getting to have the opportunity to review ideas from the entire inventor community is so much more beneficial than just trying to come up with stuff on our own. We’ll continue to come up with ideas internally and playtest them, but going forward it’ll be a mix of our own and concepts from inventors.

You mentioned that you’re looking for games that are fun for the whole family. What other elements make a concept right for Gray Matters Games?
The second hurdle to jump is the marketability of the game. The theme has to be instantly recognisable, because we are moving into more mid-tier mass retailers where you have to recognise what you’re buying right off the shelf. We also like games that tie into trends that help it stand out.

What do you think is the key to succeeding as a smaller publisher in the games space?
We’ve certainly taken a few lumps along the way, but through that we’ve learned how and where we can be successful. It comes down to the relationships we’ve made with buyers, distributors and rep groups. We use six different sales reps groups who are focused on the independent retailers, and we always make sure they’re supported with all the tools they need to be successful.

The other piece is making sure that when we’re developing new product, we’re talking to these sales teams and distributors. We want to know if they think it could be successful at a Barnes & Noble or Kohls.

Smart! We’ve spoken about You Bet-Cha! and the Root Beer Float Challenge, so let’s dive into some of your other games… Tell me about The Game of Wolf…
This is my favourite game! I’m a golfer and there’s a golf game called Wolf. You have four players, and every hole you rotate who the wolf is. The wolf picks their partner based on everyone’s tee shot. Then the pairs of players face off against each other to get the lowest score on the hole… But, if everyone hits a bad tee shot, the wolf can choose to go alone against all three other players to try and get double the points.

I took that format to trivia… Instead of going off a tee shot, you see the trivia category and the wolf picks their partner based on that. So, if I’m the wolf and the category is sports – and I know you’re a sports guru – I’ll pair up with you. 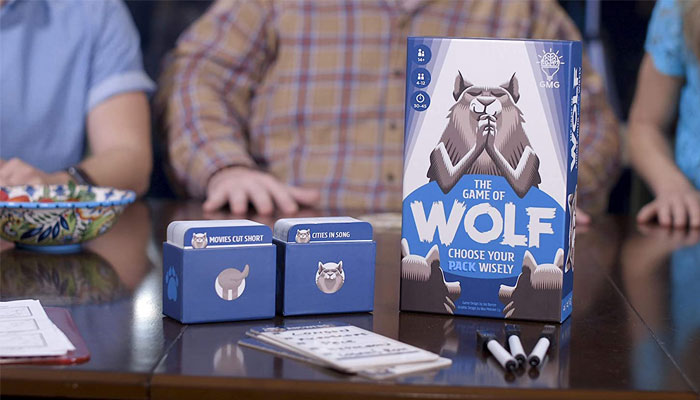 Nice – and a smart way of bringing that golf game to the tabletop!
Yes, well You Bet-Cha! was trivia and poker mixed together, so it felt natural to do another trivia mash-up. I like to think of mechanics that aren’t in board games and find ways to bring them into this space. I’m always thinking about that.

Oh!
We launched that two months after Covid came… It’s an office-based game and no-one was going to the office! Fortunately, it’s doing well now, because people are back in the office. It’s also a good teambuilding game, especially for people who maybe haven’t met their colleagues in real life before due to Covid. 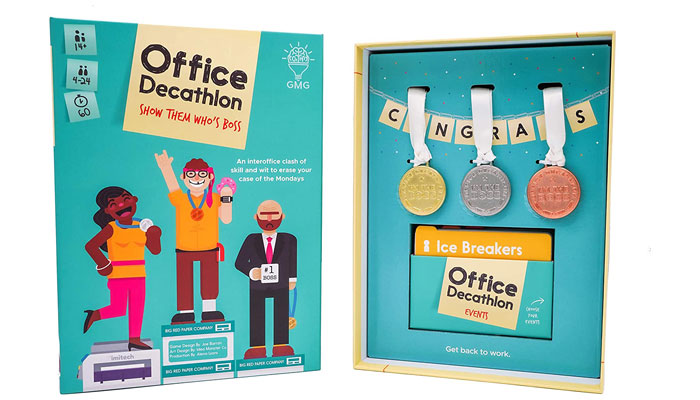 Well, I’m glad it worked out in the end! I also wanted to touch on inventing, because away from Gray Matters, you’ve also licensed a game to PlayMonster: Criminal Minds – Unknown Subject. What prompted you to pitch ideas to other firms?
When Covid hit, we looked at how many party games we were going to print, because party games took a pretty big hit… So while the operational side eased up, I focused on creating new stuff.

I teamed up with a group called Creative Fold and we started to create concepts. One centred on how we could put the experience of Among Us – the hugely popular app game – into a board game. It has hidden identity mechanics, and the game we eventually created wasn’t a great fit for Gray Matters but I knew someone would like it – and PlayMonster took it.

So it wasn’t always centred around the Criminal Minds brand?
It was actually originally themed around The Devil in the White City. It’s a bestselling book from 2003 that’s about a serial killer during the 1893 World’s Fair. It’s based in Chicago, where I live now. The book was also set to be adapted into a Hulu series starring DiCaprio with Scorsese attached to direct.

The series was then delayed and the project was killed, so we thought it was all over, but a few months later the PlayMonster team reached out with the Criminal Minds IP. They felt it could work with our concept, so we worked together and they did a fantastic job wrapping the new theme around it. I think it’s fantastic. 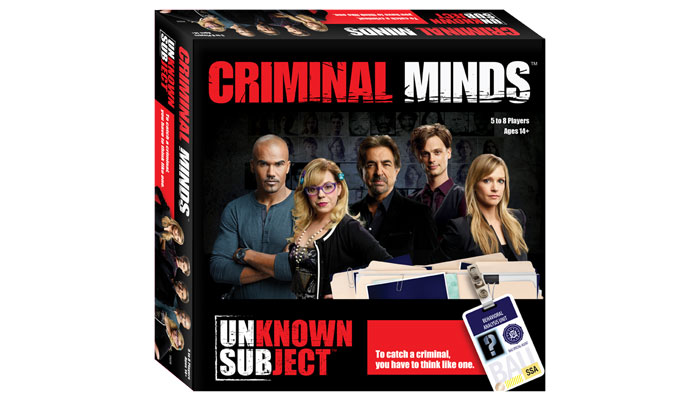 Before I let you go, your latest game – Word Wipeout – has just launched. What can you tell us about that?
Following the popularity of Wordle, we wanted to do a word game. We developed the game with four local college students – their names are on the box and they’re super excited for it to come out.

So, I could say “Boba Fett” and grab ‘B’, ‘O’, ‘A’, ‘F’, ‘E’ and ‘T’.
Exactly! You could go easy with something like ‘Yoda’, that you’ll definitely get in 25 seconds. Or you could risky, with something like ‘Luke Skywalker’, that will be difficult to pick up in that timeframe. If the timer goes off and you haven’t picked up all your letters, the other players can steal the letters you missed. When play moves to the next player, they can only use the letters that are remaining. You have to start getting creative to pull letters off the board. 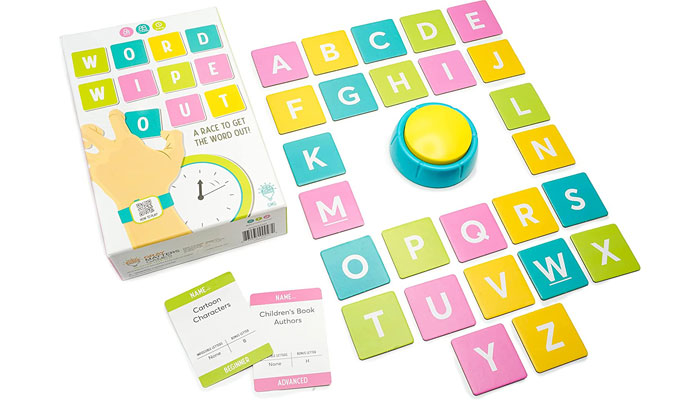 I’m sold! And was it an interesting design process?
One interesting change that happened during development was that we originally had a timer that made a sound when you ran out of time. We sent it out for professional playtesting and one of the playtesters played the game with their deaf parents. They couldn’t tell when the timer went off. So instead, we created an LED timer that starts to flash when you have five seconds left. Now, the hard of hearing community can play the game, and that’s a community of 75 million people worldwide.

It got me thinking about players who are colourblind, are blind… It’s given me a new insight into inclusivity when it comes to designing games.

Great stuff. I have one last question! How do you have ideas? What fuels your creativity?
It’s about always having a mindset of ‘How could this be a game?’ I have two young daughters and they were playing a game where they had to keep a balloon from touching the floor. How could that be a board game?

Also, if we’re travelling and there’s a game store, I’ll go in and ask “What’s new? What’s selling well? What do you like?” I also play a lot of games. I have a playtesting group that meets up once a month, but ultimately, it’s about always being curious.

Joe, this has been fun. Thanks for taking the time; let’s catch up again soon!