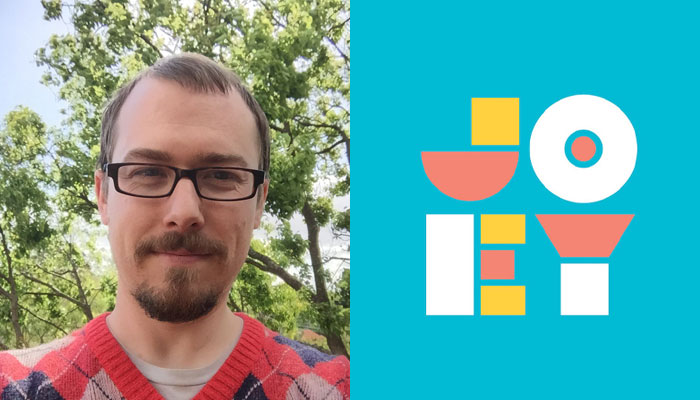 Phil, it’s been three years since we last caught up. I’m delighted to tie back in. You’ve recently launched your own games company in Joey Games. As a prolific inventor, what prompted you to ‘cross over’ and become a games publisher?
Well, it’s interesting, I started out self-publishing my own designs way back in 2007. That’s sort of how I got my start way back in that distant past before Kickstarter! So even though I moved away from publishing myself to focus on design, I always had a bit of a fondness for it – especially in being able to take a game all the way from conception to final product.

Eight years ago or so, I decided I just wanted to design for other publishers. One reason for that was the way that managing a business and all the other aspects of publishing eats away at your design time. And then, for a while, I was very content just designing, but I suppose with turning 40, a global pandemic and climate crisis, you get to thinking a bit beyond just making board games!

So the pandemic played a part?
Yes. During the big lockdown we had here in Sydney, my wife Meredith and I decided it was time to start something new together. We had been talking about some sort of project in the tabletop space for ages, and with all the extra time on our hands we felt it was a great time to actually do it.

In the end, a publisher that focused specifically on Australian themes and intergenerational play was what got us really excited; so we jumped in!

Amazing. Let’s explore the ethos behind Joey Games a bit more. What sorts of games are you looking to put out in the world?
Joey Games is about two main things. First, celebrating the peoples, plants and animals of Australia through play, and fostering a care for them. And second, creating games that kids and adults can play together to build meaningful connections. We also want to care for the planet in everything we do, so running a sustainable business is very important to us.

So our games will have Australian themes, with illustrations by Australian artists, and they will be designed with intergenerational play in mind. We want both kids and adults to really be engaged in our games as they play together.

Joey Games is launching via Kickstarter with Busy Beaks, Pass the Party Food and Scribbly Gum. Can you tell us a little bit about each game?
Sure! Busy Beaks is a card game about Australia’s amazing birdlife, with fantastic art from Sarah Allen. It’s a rummy-style set-collection game where you are trying to make flocks of five bird cards, but each bird also has a special power that helps you collect cards in different ways. You only use seven types of birds in each game out of 14 types in the box, so you can customise the game and find your favourite way to play. 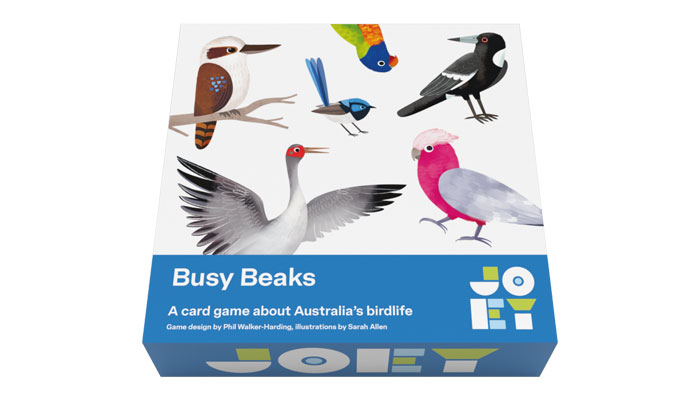 Pass the Party Food is a co-operative game of classic Australian party food. Folks who live here and are my age seem to have the common memory of going to birthday parties and eating fairy bread, lamingtons and pikelets. So, we thought setting a game at an Eighties kids party would be a fun idea.

The game is all about sharing food tiles with your teammates to score points. You have to make sure everyone has a good time – and outscore the hyperactive puppy who is knocking food off the table! 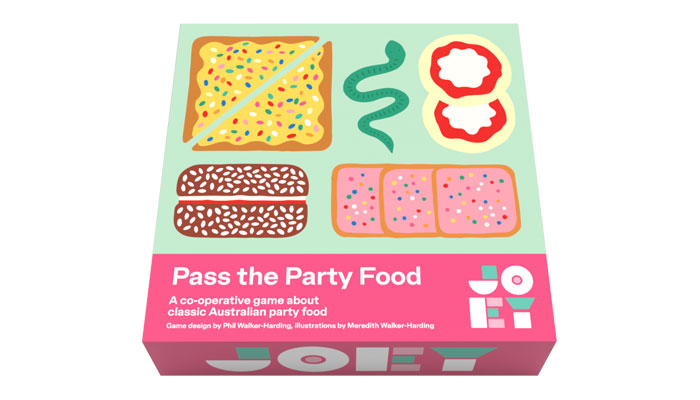 Scribbly Gum is a “flip and write” game about Australia’s scribbly gum trees. This type of gum tree has beautiful scribbly marks left on them by moth larvae who burrow under the bark looking for food. This was one of the first ideas for a theme I had for the company. It is about something so unique to Australian flora, and it lends itself so well to a drawing game – a perfect fit! 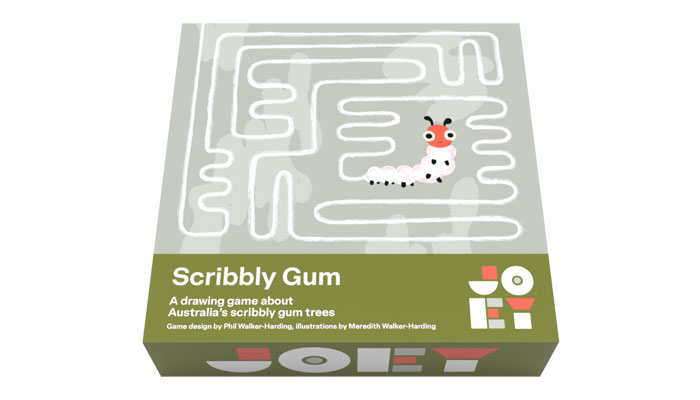 And were these designed with Joey Games in mind, or are they concepts you’ve pitched to companies in the past?
All three games were developed directly for Joey Games, but as is so often the case, some of the ideas come from earlier design concepts. Pass the Party Food originates from a mechanism I have been trying to get right for years. In the end, it was putting it into a co-operative game that made the concept really click.

Nice. Now, I also want to highlight the art and graphic design, which is knockout across all three games – but also the logo and general branding for Joey Games looks great. How important was it to get the company aesthetic right?
This was a huge priority for us as we wanted our games to be instantly recognisable and feel like they were all part of the same series. Sometimes kids’ products can be a little bit garish, and we wanted our games to have a considered and carefully designed feel.

We worked with a fantastic design studio here in Sydney called Garbett Design to develop on our branding and packaging. We are really happy with the results, and hope our games really stand out on the shelves. 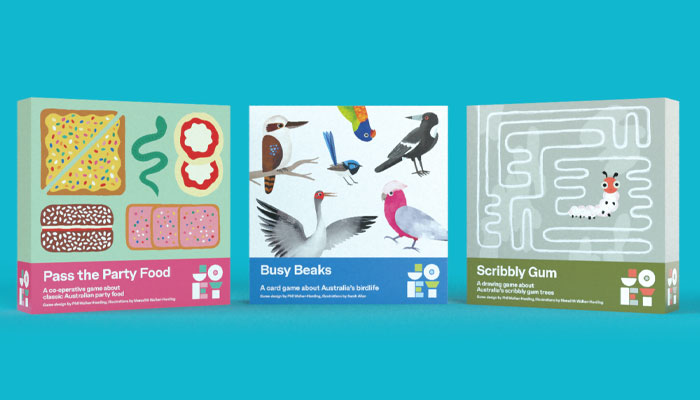 Looking ahead, do you think Joey Games might publish other inventors’ games down the road? Or is it a bit too early to say…
This may happen down the road, but at this stage we are really just focused on getting started and establishing the brand. We are hoping to let Joey Games grow slowly and organically. We don’t want to be putting out heaps of titles every year, so we will see what happens!

Makes sense! And for anyone wanting to check out the Kickstarter campaign for Joey Games, you can do so here. Now, before I let you go, I wanted to dive into a few of your other recent titles. You designed Tetris for Buffalo Games. Talk us through the process of bringing that brand to life in tabletop. Were there any unique challenges about translating the classic digital game into the real world?
That was a really fun experience, as I love Tetris so much… Who doesn’t! I was also reflecting recently that Alexey Pajitnov was probably the first famous game designer’s name that I became aware of, as it was displayed on the start-up screen for the Mac version we had in the Eighties.

Anyway, the first thing I knew I wanted to have in the game were vertical boards that you could actually drop pieces into. The actual physical ‘drop’ seems so important to the feeling of playing Tetris. Thankfully, the product designers at Buffalo were totally up for that. 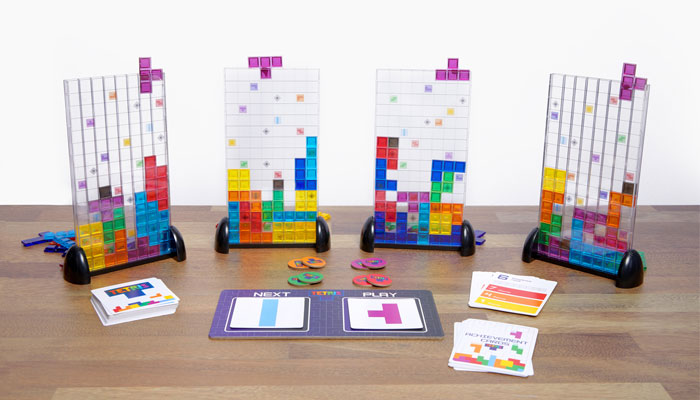 The real trick from a gameplay perspective was making the gameplay recognisably like Tetris, but also having enough other elements that it was still interesting without any real time clock pressure. So I added a couple of new ways to score points other than completing lines, and I also gave the players a new type of piece called ‘minos’. These are little one-square pieces which are used to fill in gaps and create opportunities.

The Tetris folks are very serious about their brand, so we weren’t sure how they would feel about these additions, but thankfully they liked them!

It feels like a very authentic brand extension, so good work! A more recent launch of yours is Museum Suspects with Blue Orange. On paper, the ‘investigation game’ space seems like a really competitive one – with mass market classics like Guess Who and Cluedo right the way through to smart recent entries like MicroMacro. How did you approach creating something fresh here?
People who have played it often say Museum Suspects feels like Cluedo mixed with Guess Who. While I didn’t aim for this combination, it actually is a pretty good description!

I have always wanted to do a mystery-themed deduction game, but as you say, it is a bit of a crowded genre – or at least, it is hard to think what is left to be done in that genre. The design started out as quite a complex game, and what I really wanted to do was have the game system itself generate the crime and the solution in real time, so you didn’t have to use a pre-set scenario or any pre-calculated game data. 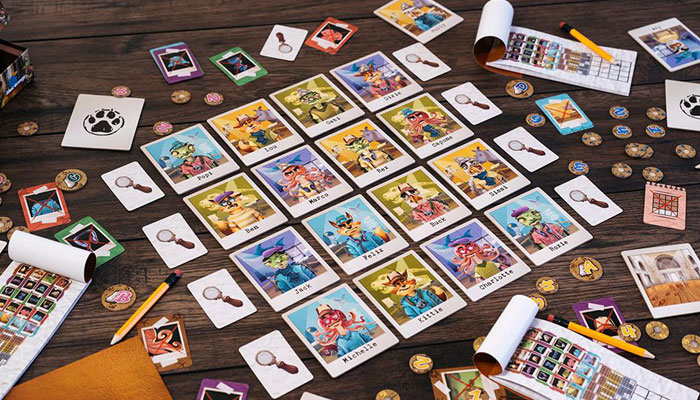 As so often happens with my work, the game kept getting simpler and simpler during development, and so it ended up as a really good fit at Blue Orange – who did a great job on the production.

I hope the game stands out by being really easy to teach, quick to play, and having that little sense of surprise that the game itself “knew” the answer to the mystery all along.

Looking ahead, can you tell us about any other titles from you that are landing soon?
My latest game from Buffalo Games just released in Target in the US and it is called Planted – it’s all about collecting and caring for houseplants. The production values on it are super great!

Also, Platypus is a new party game that I did with Matagot. It’s my take on the Codenames or Just One genre of word games. It can be lots of fun with large groups and is just out in most parts of the world. 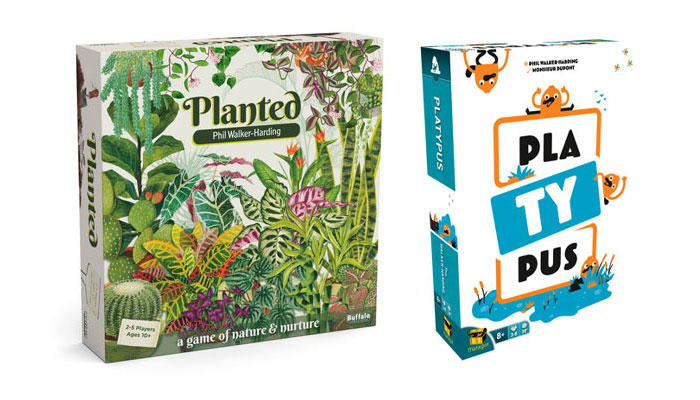 Great stuff. Thanks again for taking time out for this Phil. Let’s tie-in again soon. And that link again for anyone interested in Joey Games is https://www.kickstarter.com/projects/joeygamesau/joey-games-a-new-australian-board-game-publisher.