“A shower is the best game design studio you can have!”: We speak with Glenn Drover, VP of University Games’ new Strategy Games division 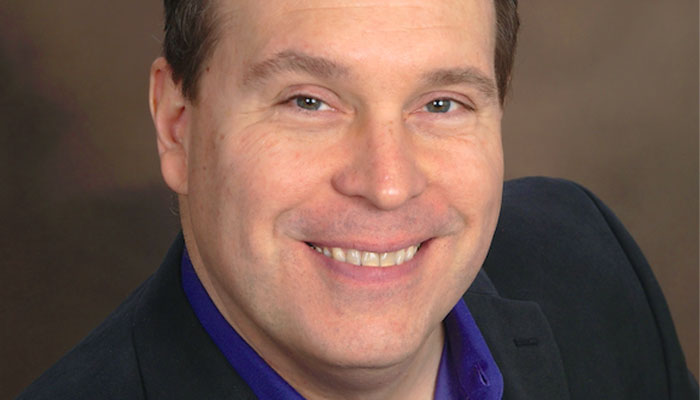 Glenn Drover, VP of Strategy Games at University Games, discusses his work on games like Age of Empires III, Raccoon Tycoon and the upcoming Mosaic.

Glenn, thanks for taking time out for this. Let’s start with the recent big news! Your company, Forbidden Games, has been acquired by University Games. How did it all come about?
Well, I’ve known University Games since they were founded. I bought their first Murder Mystery Party game back in the Eighties. Then, many years later, I’d see them at trade shows, but we didn’t have any direct contact with them. The deal came about because Bob Moog, the CEO of University Games, was looking for a company like ours, and reached out.

I thought: ‘We haven’t been around that long… Are we really at a point where an acquisition makes sense?’ The opportunity was too good to pass up, and it’s a perfect fit: University does so many things so well, but they didn’t have significant presence in the ‘gamer game’ channel. Adding our product line filled a gap for them, and allowed us to join a much bigger company with amazing reach.

It also makes sense because strategy games are currently blowing up with several hit strategy games making their presence felt in the mass market; our Raccoon Tycoon game will be on shelf in retailers like Target and Walmart this holiday.

I know its early days but what are some of most exciting things about being part of the University Games family?
Well, they’re a much larger and more well-established company. Their distribution is phenomenal, and their operation is much more sophisticated than ours was. They’ll give our products much broader distribution and better support with professional sales, accounting, and operations teams, and their own warehouse…

We were tackling all of those issues as a small games publisher, but boy those are distractions! If our goal is to make the next big game, having to deal with all of that reduces the amount of time we have to focus on game development.

As part of the acquisition, you’re now VP of University Games’ Strategy Games division. What will this new role entail?
It’s brand new so we’re still working out some of the specifics, but primarily, I’ll be designing, producing and developing games. That includes all the fun things that we as designers and inventors love to do, but I also have 30 years of corporate games experience on the business side – so any way that I can help, I’ll do that.

And I imagine that for tabletop game designers, it’s exciting to add University Games to their list of companies to pitch concepts to.
Absolutely. We want to grow this division organically, as well as looking at outside opportunities.

We should discuss some of the games that made Forbidden Games such an attractive proposition! You mentioned Raccoon Tycoon, so let’s dive into that one. Talk me through where the idea came from.
It’s a funny story. My wife and I went to a friend’s house and we decided to play Catan. My wife had never played it, and I thought it would be a great way to hook her into becoming a gamer. We played it… And she got bad numbers on the board and on many turns she didn’t have interesting things to do. She didn’t like it at all! Catan is a classic but that’s an issue with the game.

I love commodity/ market games like Catan, so I wanted to make a game that had those elements, but where you’d always be able to do something interesting on your turn. I was also thinking about another classic game: Monopoly. Both Catan and Monopoly are classics that have sold millions of copies, but they’re also known to be inherently flawed games.

I wanted to pick out the most compelling elements in those games, while leaving out the flaws. Monopoly has cool set collection, and the money acquisition is soooo satisfying; while in Catan, trading the commodities is so much fun. When it came time to design Raccoon Tycoon, I made sure that those elements were a part of the play experience. 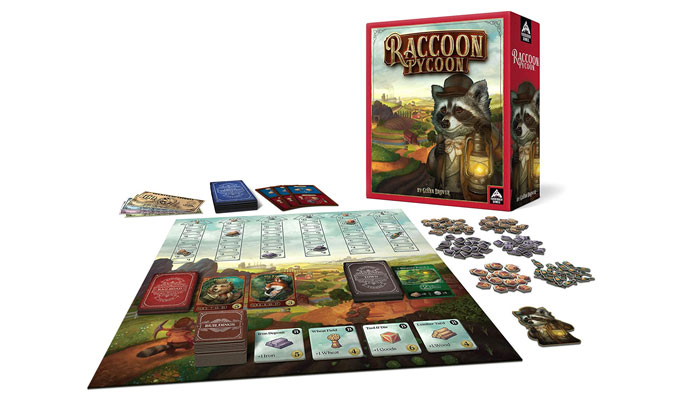 And theme-wise, we have handsomely drawn animals in dapper clothing. Why go in this direction?
I wanted it to appeal to a broad audience. I very consciously wanted it to be a gateway game to bring new gamers into the gaming. Lots of games in the ‘gamer game’ world are very male-oriented in their themes and art styles. Thankfully, more women are interested in games today, and the industry is getting more balanced, so I wanted a theme and a look that was female-friendly, while also not off-putting for guys.

I should also give a shoutout to the amazing artist we used for Raccoon Tycoon, Annie Stegg. I did a search for anthropomorphic animals on Google to find an artist that might have already done something similar, and I saw she had done an oil painting of a badger in a top hat and waistcoats. It was gorgeous, and I knew she was who we had to get for this game. 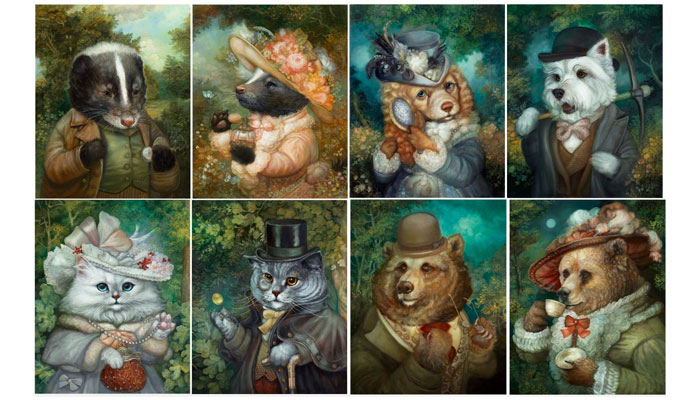 Looking ahead, your next game is Mosaic. What can you tell us about that?
Mosaic is a civilisation-building game. I’ve been a fan of them since Sid Meier perfected the genre in the early 1990’s. Mosaic is aimed at more of a gamer audience than the gateway game audience of Raccoon Tycoon.

It’s action selection, and that means there’s low downtime. Things progress quickly around the table. You do one thing and move on. This means that the game is playable in two hours, which is pretty unique for a full-blown Civilization game.

Honestly, I think it’s the best game that I’ve ever designed. We’ve been playtesting it for two years and we’re not sick of it yet. It’s shocking because usually, when you play a game that much, you don’t ever want to look at it again! But with Mosaic, everyone wants to keep playing it. So much so that we’ve instigated a year-long tournament with three of us – we play a tournament-qualifying game every week! 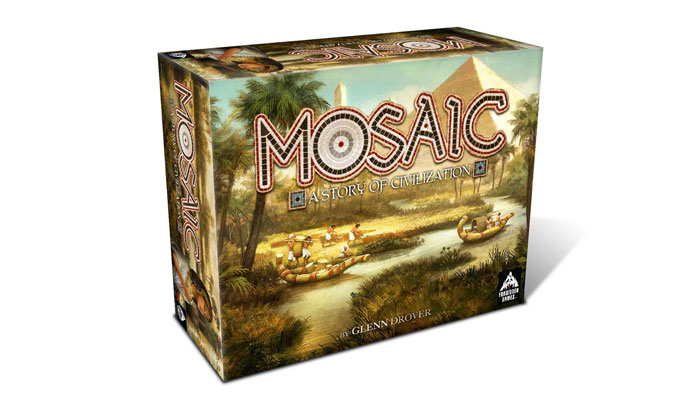 That’s a very good sign! You mentioned being a fan of civilisation games; did this idea all start with the theme? Or was it a mechanism that kicked things off?
It started with the civilisation theme, then I looked at what mechanisms to pursue. Age of Empires III is one of my most popular games and it was one of the first worker placement games, so I tried that with Mosaic in its first iteration…but it was terrible!

I had to decide whether to push through and try to fix the design or throw away months of work but keep the theme. Ultimately, I threw it away and started over with fresh mechanics. I went back to Raccoon Tycoon, where you can do one of five things on your turn. In each of the five things, there are choices, but it’s quite simple… So I took that core idea and brought it into a more robust game with Mosaic.

If we go back a bit, how did you find yourself working in board games?
I had worked in video games, across sales, marketing, and business strategy in the 90’s, then I founded a company called Eagle Games in 2000, specifically to publish board games that I was designing.

I liked the old strategy games like Axis & Allies – big games that came with lots of toys – but in the early 2000s, they had all but gone out of fashion. I wanted to bring those sorts of games back, and with my video game ties, I also wanted to get some licences and bring video games to the tabletop. 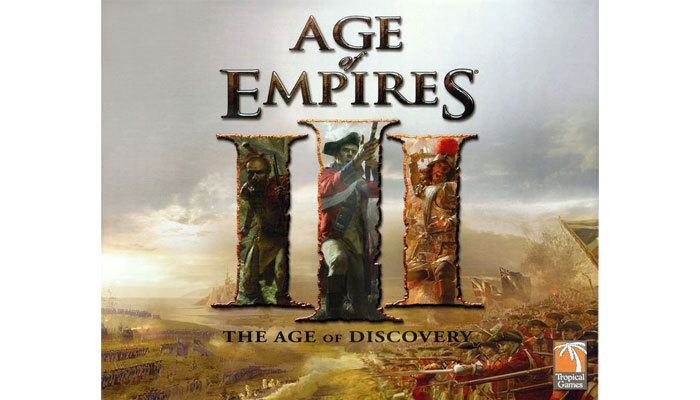 Yes, it’s quite common now to see tabletop takes on video game brands. And was this back when licensed board games had a bit of a bad reputation?
Well, these kinds of games weren’t always good! They were often just a ploy to get customers interested and not really about good game design. In fact, that was kind of our experience. The first game we worked on with Ensemble Studios was Age of Mythology: The Board Game. It was part Eurogame and part Ameritrash – and it was almost a good game! It suffered from a bit of schizophrenia.

Then when we licensed Age of Empires III, they said: “With Age of Mythology, we gave you specific direction on the design because we wanted a game like Titan. You know what… Go and do what you do. Make it the best game you can.” Age of Empires III came out in 2007 and it’s still one of my best-known games. It was pure game design. Creating a good game first and then applying the license seems to be a better path.

Are there any challenges unique to adapting video games into board games, that you don’t get when adapting other kinds of IP?
A lot of things that a video game system can do for the player becomes real work when translated to analogue. It can make the board game very long and arduous. This was my mistake when I adapted Sid Meier’s Civilization in 2004. I was trying to be too literal with the gameplay; I was remaining too true to the original PC game. It was a poor decision. Players were having to do too much work; there was too much to keep track of.

As a designer, your mission should be to streamline the experience, so you get the same distilled impact and feel without all the work. Sid always said that the best games put the power in the players hands to make interesting decisions. When I’m looking at game design, I want to give players the chance to make as many interesting decisions per hour as possible. If they make one interesting decision, but then have to do all kinds of book-keeping, you lose the fun.

Great insights. Glenn, I have one final two-part question. What fuels your creativity?
Sometimes I’m doing it consciously, but sometimes it’s just inspiration, like a movie or a life experience that makes you run to your pad to jot down an idea. It’s also funny how the shower is the best game design studio you can have! The clarity and the relaxation is the perfect environment for creativity.

Like many other things in life, you have to be productive but relaxed to be creative. Stephen King’s policy is to just churn out content and he was always prolific as heck, but it doesn’t work for me. I have to want to be creative – and luckily that’s often!

Glenn, this has been fun. Huge thanks again for taking the time.