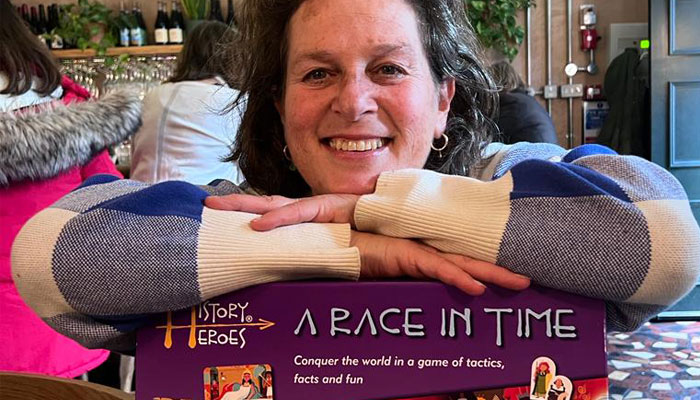 And have you always been a games fan?
It won’t surprise you to learn that I’ve always loved a certain kind of game… I played a lot of Mastermind and Yahtzee when I was growing up. Trivial Pursuit, Articulate, Logo, Codenames… I tend to lean towards ‘brain-scratcher’ and knowledge games, with that fun bit of random luck and team-play.

Let’s dive into History Heroes! You mentioned the card games came before the board game, but where did the brand originate from?
The brand concept originally came from a passionate history teacher called Harry Hastings. He created a History Heroes card game about Kings and Queens on the back of a school trip. His game was a bit ‘Top Trumps meets flashcards’. He was looking to move and sell the concept on and I came along!

I loved the idea, took it on and revamped the brand. I wanted them to be fun, interesting and playable for all ages – you’re never too old to want to learn. The card games are played a lot by children and their families, but adults also play them too with each other.

I also developed the gamification of the cards and wanted them to genuinely appeal to all ages and stages. The aim was for people to play together on different levels and learn something along the way. 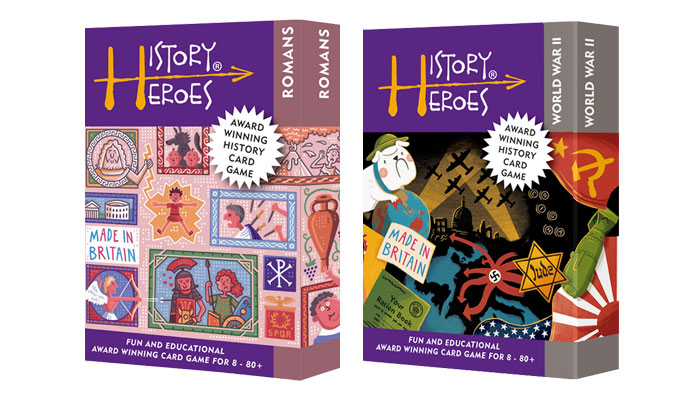 Fab. You revamped the game away from its ‘Top Trumps’-style origins. How does it play now?
One of the big things about History Heroes card games is that you can make up your own rules: so many customers have told us the brilliant, different ways they play the games but essentially, it’s a ‘Who am I game?’

Each card has seven facts of different levels of difficulty. You choose your level and try to win the card by guessing who the character is from the facts read out on that card. You can play it that you win more cards by choosing a more difficult level, or you can make it easier or harder for different people in the game by choosing their levels for them… That way, you can ‘contain’ smartypants Great Uncle Wilfred when he’s going into History Heroes battle with his nine-year-old great-niece!

You can also start off gently and collectively and then build up to a viciously competitive game as everyone becomes more knowledgeable. 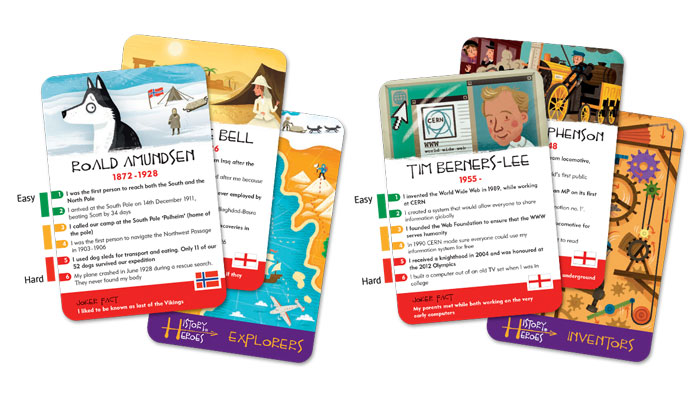 The brand is expanding into the board game space with A Race in Time. How did you go about ensuring it still retained what had been successful about the card games up to this point?
We’re really excited about the launch of A Race in Time. We developed the board game over the last year before putting it into production this summer. We chewed it over, discussed it, play-tested it with a broad range of people. This included some in the industry, such as the fabulous Rory Kelly and his Merchants of Fun band – before he went to Hachette – my colleagues at History Heroes and previous, enthusiastic customers.

Every single person said at least one thing that helped hone the concept of the game. We very much wanted to build on the success and the dynamics of the card games, while giving the board game its own character and USP. We wanted every bit of the board game to have fun and entertainment value – in the way it looks and in all the information it imparts through stealth. 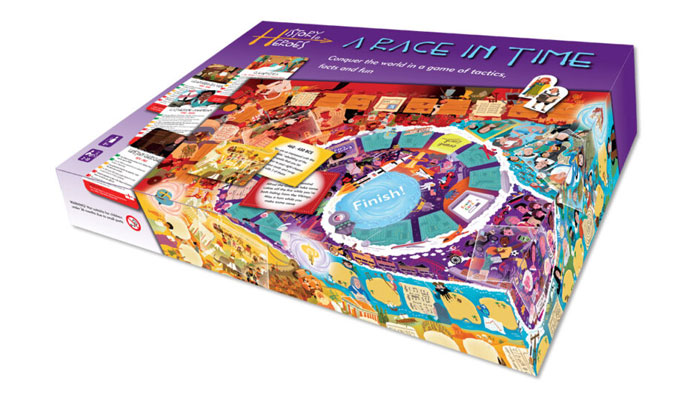 We also wanted to build on what we know works with the card games. So, the players essentially propel themselves around a fantastic board – packed with historical cartoons – by picking up History Heroes cards and guessing correctly who the character is: you move forward the same number of squares as the level of fact you choose.

The 13 existing card games can act as expansion packs to the board game too as you play it more and more by adding in more and different History Heroes cards. The board game also has elements of chance: event squares and cards that can propel you forward or stop you in your tracks, depending on what you land on and pick up.

The board game is a journey through time from the Ancient Era to the Present Day and it gives you a huge and broad sweep of history as you race along. It also has another level of play you can add on with ‘secret objectives’, so it offers the same concept of being able to be played at different levels, in different ways but in its own unique way. 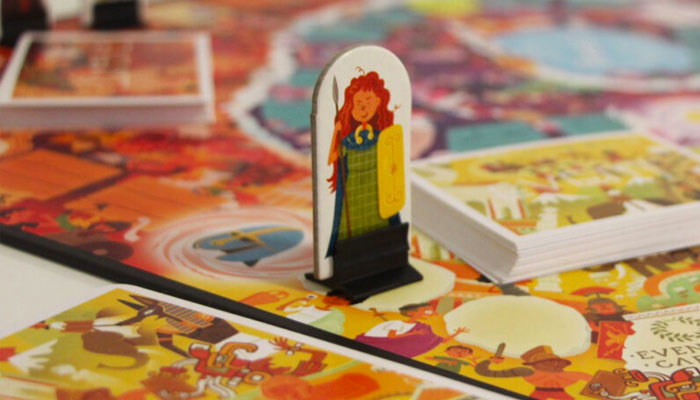 Sounds jam-packed! All the games in the series have really impressive artwork. What steered your approach to this?
The artwork is vital and key to all the History Heroes products. I was very clear that I wanted artwork that was fun, imparted knowledge cleverly, would engage younger children – often the first way to attract their attention – but that a supercool teenager might aslo enjoy too… That way you are genuinely on the way to creating a game that anyone will be happy to play.

My graphic designer, Rupert Purcell, introduced me to the fantastic Wesley Robins, the illustrator, and he has created all our artwork. He’s a brilliant person to work with – absolutely gets it and always makes every project easy and exciting. I’m always delighted by what he comes up with. It also helped for the board game that he is a gamer! 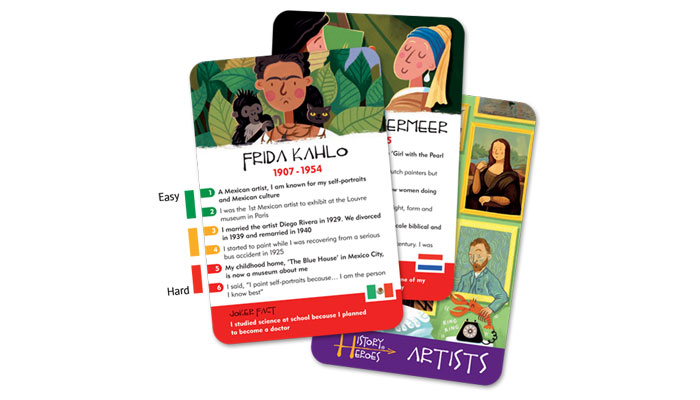 Wonderful. Good work Wesley! Now, with all these games I imagine you walk a tightrope between creating a fun experience, but also ensuring it has educational clout. How do you get that balance right?
It’s a very good question. It’s incredibly important that we hit that balance to make the games – and board game – as fun and interesting as possible, because that makes the games more attractive to customers and it’s the best way to learn.

We worked really hard with the board game to lighten the tone with the event cards and their facts, so that players could work together or try to thwart other players from progressing. We really want people to absorb lots from playing but at the end of the day it does need to be fun!

Why do you think play is a powerful means of engaging people in history?
People often play our games and then tell us with surprise that they really enjoyed them, despite always hating history at school. This tells us that they were taught history badly! So people quite often shy away from ‘history’ things, but of course history is a brilliant cauldron of the most amazing stories about the most amazing people.

Playing our games doesn’t feel like a history lesson. They feel like playing games about things, which turn out to be interesting and often have a direct bearing or relevance on our lives today too. So, for example, when you discover that the first official use of ‘OMG’ was used in a letter from Admiral Fisher to Winston Churchill in World War One on one of our cards, that no longer feels like history… It’s a bit of cool general knowledge: you can never have enough of that as far as I’m concerned!

Great fact! Alex, this has been fun. I have one final question:, how do you fuel your creativity?
I’m a bit of a magpie: I’m always looking for things to entertain and interest me from people, games, sport, art, theatre and books. I remember watching an episode of Have I Got News For you and I realised that I could answer the blanks in the questions about the publication of the week, which was Coal Monthly… I’d been stuck somewhere and picked it up as my only piece of entertainment! I should have had a pack of History Heroes with me instead!

Coal Monthly! I once had a job interview at Hoist, a magazine for the industrial lifting equipment industry – they might come from the same publisher… Either way, I’m sure inspiration lurks within the pages of both! Alex, a huge thanks again and good luck with A Race in Time!