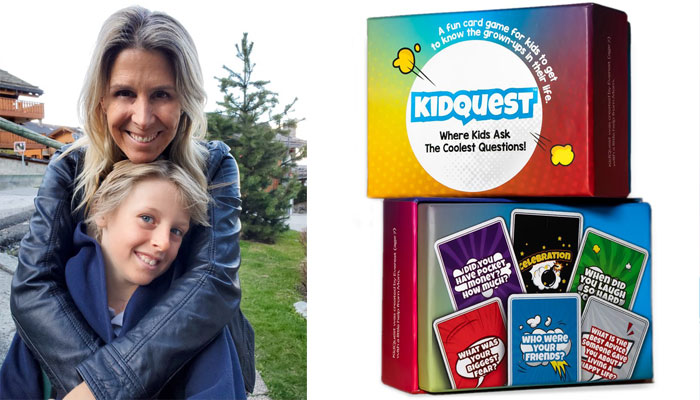 KidQuest features 100 questions like ‘What was your biggest fear?’ and ‘Who were your friends?’ designed to prompt engaging interactions and help kids to learn about the people and world around them.

We caught up with Ariane and Everest to learn more about the origins of KidQuest – and what the future holds for the game. 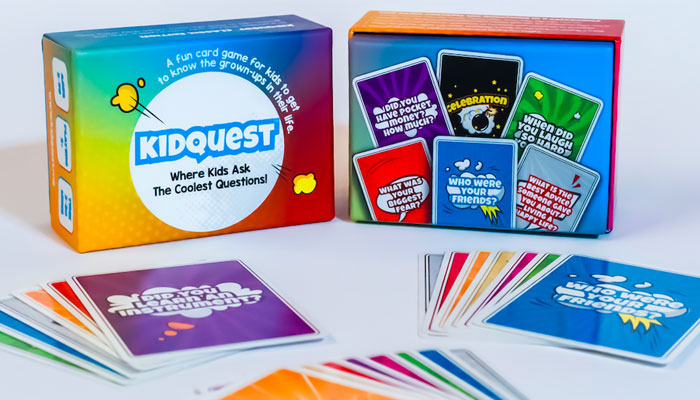 Ariane, Everest, it’s great to connect. Ariane, if we start with you – did you have a history in board games prior to launching KidQuest?
Ariane de Bonvoisin: Not at all, actually! My background started off in business. I have an MBA from Stanford and I was told my whole life to go and be in business, so I followed that path. I did 10 years in New York at big media companies like Time Warner, Bertelsmann and Sony. Then my inner voice was loudly saying: ‘I don’t think this is my thing’. I felt maybe I’d climbed the wrong ladder and it wasn’t what I should be doing.

So, I took a brave step, climbed off that ladder and took a bit of time off. Then I followed my soul, my passion, my spirit and set out to do things that mattered and that would help others. I did a start-up to help people through life changes then I put out a series of children’s books, but my main work now is coaching start-up founders and CEOs.

I help them raise money, get through fear and imposter syndrome, assist with the design and product, hiring and hopefully exiting. I stand by as a kind of cheerleader and a coach, having done it myself.

Great stuff. So where does KidQuest fit into all this?
AB: Well, it’s still in the world of life skills, helping people, improving wellbeing… In addition to being a fun game! And Everest and I get to coach each other while building a start up together now.

And Everest; you’re now eight years old and already a game inventor! Have you always loved games?
Everest van der Zwan: When I come back from school, I’ll always have an idea to play or a game in my hand that I want mum to play! I love Monopoly and UNO. And LEGO of course!

Of course! All classics. And how did you and your mum come up with the idea for KidQuest?
EZ: We were sitting at the dinner table, and I was asking questions to my parents about when they were kids. My mum said: “Why don’t we try to make a game out of this?” We always wanted to put something out into the world together – and then we had this idea! We brainstormed the game, the name, came up with new questions every day, created the logo and it all came together.

You said this all came from asking your mum and dad questions. What sort of questions were you asking?
EZ: Well, they would be talking about someone getting stitches, and I’d ask: “When did you get stitches?” My dad would mention that somebody had broken a bone and I’d ask: “Have you ever broken a bone?”

AB: Everest is our one child and he’s a very curious kid. He wants to know what we were like when we were his age. We’d be talking about his pocket money and Everest would ask…

EZ: Did you have pocket money as a kid? How much did you have? What did you spend it on?

AB: It was interesting because he was learning that we got a lot less than he does, about inflation, and that I spent my pocket money on Smurfs. My husband grew up in South Africa so he got different things. Through these questions, Everest got to know about parts of us that we’d never thought about sharing.

How did this shift from fun chats at home into a card game?
AB: Being in the start-up world, I’m always looking at ideas and I like things being practical, so we decided to write down all of these questions. Some were basic things like ‘When you were a kid, did you prefer a bath or a shower?’ and some were more profound, like ‘When was the first time you experienced someone dying?’ And then we had questions like ‘What’s a really naughty thing you did as a child?’ One of our hard jobs was choosing the final 100 questions to put into the deck.

It was all about normalising things and for him; it was about finding out that mum and dad were just like him and how we navigated similar life moments and challenges. 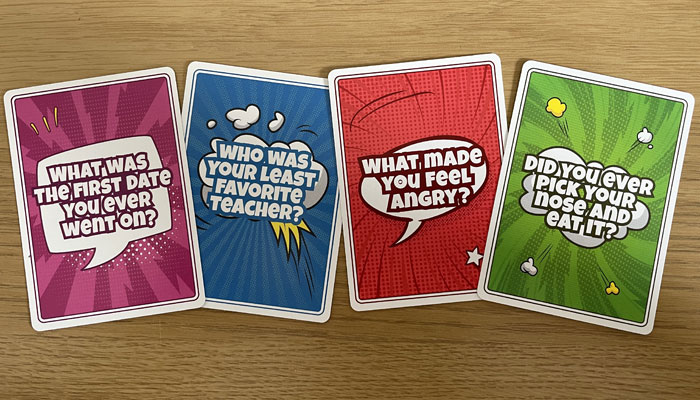 Everest, what were some of the most interesting things you found out about your family through these questions?
EZ: Well, my 84-year-old grandpa is someone I’ve always thought was super good, but I asked him ‘Were you ever naughty at school?’ He said ‘Yes!’

What did he do?!
EZ: He wore a big trench coat and hid a water pistol under it. He then went on an escalator and sprayed every single person who was going up the other side of it. One lady got soaked!

Ha! Well, now this is published I imagine he’ll have to go into hiding.
AB: It completely changed his perception of his grandfather. Now they’re very playful; it was a real bonding moment. I didn’t know that either… I was crying with laughter!

Amazing. So what helped turn this from a conversation-starter into a ‘game’?
EZ: We added cards in that aren’t question cards to make it more of a game. We have Blank cards where kids can ask whatever question they want from their imagination. Then there’s the Reverse card where the grown-ups get to ask the kid a question.

AB: I got that once and I asked Everest if he’d ever had a crush on anyone. He said…

Good answer!
EZ: And then there’s the best card – the Celebration card. This lets the kid ask their parents for anything they want! Like pancakes for dinner! Or to stay up late for a movie night!

AB: It’s within reason, but the parents have to say yes! It leads to a lot of excitement.

A dangerous card!
AB: Yes! But it goes back to some of Everest’s favourite games. UNO has cards that change things up, so that helped him add some twists to our game.

EZ: I also came up with the idea to add points. The more interesting or creative answers get more points, so it’s not just question cards. The grown-ups need to tell a good story.

AB: It also makes it a little bit competitive which is fun. 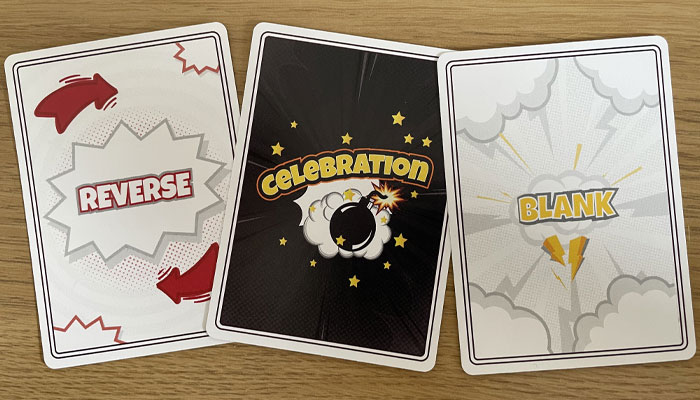 You mentioned there’s some quite deep questions in there about death and things like that. Some people might think you’d want to steer clear of those sorts of topics in a kids’ game, so why was it important to have these ‘tougher’ questions in KidQuest?
EZ: It’d be boring if it was just things like ‘What’s your favourite fruit?’ Questions – like the death one – make it more interesting. We wanted to try something different by putting in these deeper questions. It means you have a more interesting conversation; these sorts of topics wouldn’t pop up otherwise. And they are part of life.

Well said Everest. Now, you guys self-published the game. Were you ever tempted to pitch it to a games company and try to license KidQuest?
AB: No, the entrepreneur in me wanted to get it out there. I didn’t want someone to tell me what to do, and I was very protective of Everest having his say.

We were in the midst of the pandemic, locked down in Switzerland, partly home-schooling Everest, and KidQuest became our joint project. The external world was closed, so the timing meant we could do it together, get some printed and give it a try.

Down the line, who knows? We might get an email from a toy company that would like to distribute it and help us spread the word that would be great. But I’m a big believer in the baby steps approach.

But you’re open to conversations with distributors or game companies that would like to take KidQuest?
AB: Absolutely. Right now, we’re selling on amazon, but our hope is to find partners who can bring experience and greater distribution. We’re taking it seriously, and I have a good feeling about it. The testimonials have been great too; people are finding out so much about their family members. It creates memories. And it helps young people.

Have you been bitten by the game design bug? Do you think you’ll launch other games?
AB: I know as a start-up founder, a lack of focus and spreading yourself too thin is dangerous, so I want to give KidQuest as much attention as we can. We do have other KidQuest editions in mind. And we’ve been asked to translate them.

That said, we meditate as a family, and we’ve gamified the experience to make it fun for Everest – and us! We time it and have a little chart and there’s prizes for meditating. Could that lead us to create a game about meditation for kids? Maybe!

We’ll keep our eyes peeled! Guys, this has been fun. I have one last question: how do you fuel your creativity?
AB: I’m always looking for small pain points or problems. I like to think about how I’d solve it or improve it, often for myself and then others. I also journal a lot, but always blank journals. Journals with lines are like ‘eugh!’ I always travel with a blank journal and write everything and anything down. One day those ideas will plug into something!

EZ: For me, I’ll be watching TV and the cartoon character might fly, so I’ll go and try to make wings from some new material. For me, it’s visual. It’ll see something and want to try and make it myself in a different way.

Smart stuff Everest, you’re a very articulate kid! Guys, congrats on everything you’ve done with KidQuest so far; I really look forward to seeing where it goes from here. And if people want to check the game out, the KidQuest site is here and the amazon page is here.