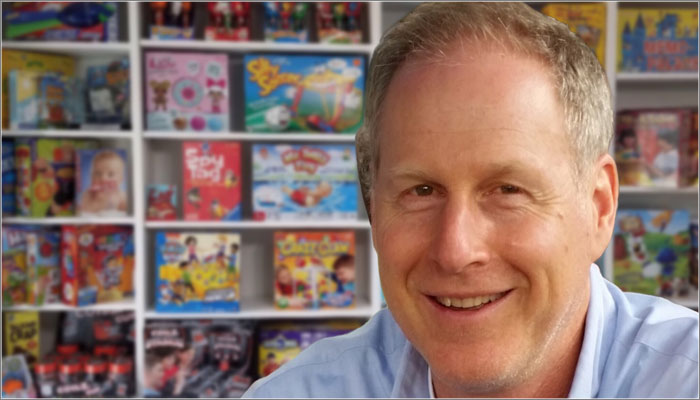 With a string of hit titles including Don’t Step In It, Soggy Doggy and Heist, Don Ullman is a prolific and award-winning inventor.

We caught up with Don to ask about his creative process, collaborative efforts and overnight success… 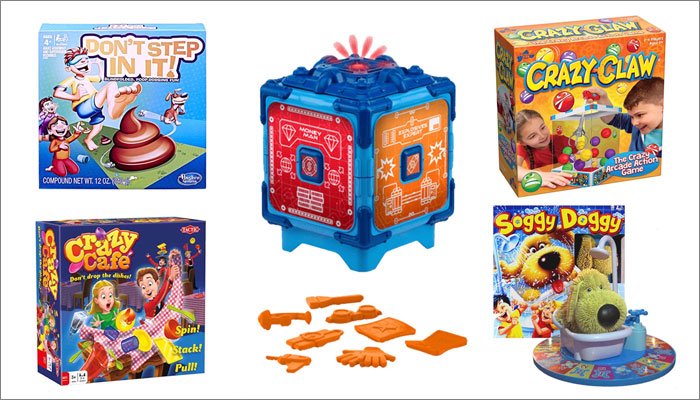 We don’t often use the word ‘prolific’, Don, but in your case it’s apt… Your back catalogue is vast. How did you become a toy-and-game inventor?
I was trying a lot of different things and not really finding anything I really liked. I worked at a lot of jobs and even tried to start a few businesses – some of which were mildly successful – but I always had these other ideas. I think one of the reasons I may’ve had trouble in some of my other ventures is that I get bored rather easily.

But none of these ventures were board games?
No – although, eventually, when I did create a board game, it was a really bad one! At about the same time, though, a friend of mine was self-publishing a game. He asked if I wanted to go along to New York Toy Fair – so I went…

Eye opening?
Yes. And once you go to Toy Fair it’s quite easy to get hooked. So we started creating some other things and meeting people that could help. It was a real struggle for a long time but I always enjoyed it and I had the good fortune of being married to Anne who had a job with health insurance and is not just a beautiful person, but indulgent! Anyway, I kept at it and about 25 years later I became an overnight success!

An overnight success 25 years later! Love it. So when you were growing up, with what did you tend to play? What was your favourite?
I’m not sure I had a favourite. We played lots of games like Rebound, Bash, Mouse Trap, Monopoly, Operation, and lots more. We also played a lot outside and often created our own games. We had our own Olympics with the neighbourhood kids, and even had chariot races where two older kids would be hitched to a wagon with a little kid rider.

So this year, PlayMonster is launching your new game Drone Home. Like another of your recent hits, Heist – Bank Attack in the UK – it has a very toyetic and rewarding payoff… What’s the aim of it?
You’re trying to get your aliens into a drone to send them home. If you slide an alien into the drone, there’s a short delay before it takes off, allowing other players the chance to knock you out. It’s fun and frenzied, with a huge payoff. 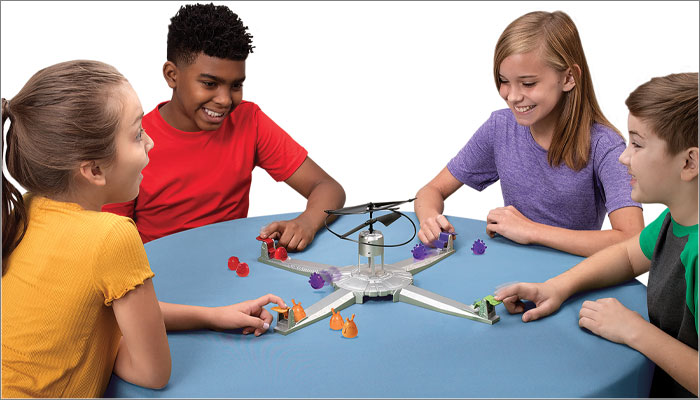 Right! And I should make clear: it’s a real drone! Once the first alien’s in, the drone really does get ready to fly. It’s great fun…
Thank you. And PlayMonster did an amazing job developing it, so a big thanks to them!

Let’s take Drone Home as an example… Where do you start thinking about new ideas? Is it a case of saying, “What if aliens need to get home?” or more, “How do I build a drone into a game?”
So it works differently all the time. I think a lot of times the idea can start with a name, or a payoff, and can then be built around one or both. In the case of Drone Home, the idea came from a partner of mine and his son – Jose and Hans Leal of Hans-C Inventions.

Well, congratulations to them, too. So Drone Home is a collaboration?
Yes; I always, or almost always, collaborate on ideas because I think it is so important! In this case, my partner Jose is an amazing inventor and model maker, and we worked together defining game play. Initially it was called Air Lift and players were trying to rescue characters from an island. It went through several iterations on that theme before it was playing really well. PlayMonster came up with the drone theme and name. 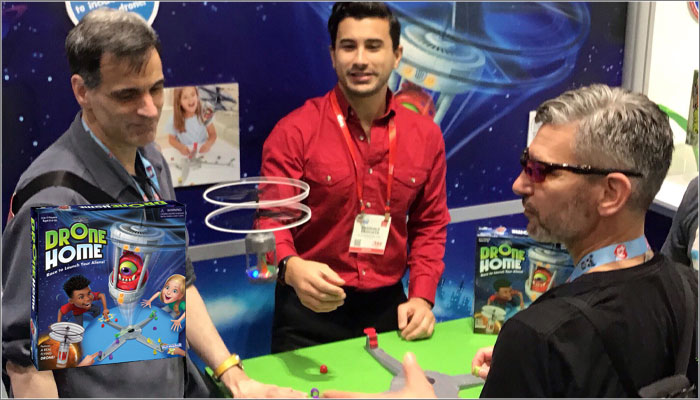 Why is it so important to collaborate? And is there any disadvantage to it?
There is no disadvantage – as long as you’re working with people that you like. But collaboration’s important because different people come to ideas with different perspectives and skills, and this ultimately leads to better results.

I’m curious: do you ever get stuck for ideas? How can people get unstuck?
I think everyone occasionally gets stuck for an idea. Just bouncing things around with others can help get you unstuck, of course, but there are lots of ways… Ultimately, ideas for most people just don’t ‘pop in’ – they take some effort. So by working at it a bit, like playing around with words for names, or looking at strange art, or going out and cruising different types of stores and looking for inspiration can help.

A sort-of input / output relationship?
Yes. If you’re patient and keep at it, more ideas will come! And of course sometimes ideas can pop in, so you need to be open to them. Stressing about it certainly won’t help. Some of my ideas happen when I’m out walking the dog. It’s a time when I’m relaxed and away from email and phone calls and have a nice block of uninterrupted time to think and use my imagination. 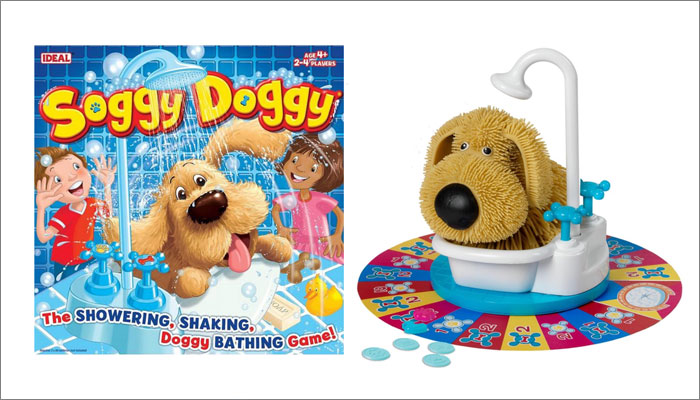 After you have that first thought, then, what’s your process?
It always goes in a notebook – and often stays there for a long time. I have lots of notebooks that I review from time to time, and it’s often in one of my notebook reviews that an idea I was stuck on when I first wrote it down becomes more viable, or relevant, or I think of something to add to it.

Once I think I have enough of an idea that I want to act on, I pitch it to one of my inventing partners to see their thoughts. We usually kick the idea around a bit and hopefully get it in a position to mock up. I’m really lucky that I work with some great partners who have great model-making skills, because I don’t. Then we make a pitch video and start to get it in front of companies. And, if we’re very lucky, it could be on the shelf in a year or two. Of course, most don’t make it, like the many items littering my basement at the moment!

You mention pitching. It’s an area in which some new inventors struggle… What tips have you on that? Does it get easier after a number of hits?
I think it does get a little easier, but companies are always looking for the best products so no matter how many successes you create, you still need to bring the goods! Also, mainly companies are reviewing videos so if you can create a compelling presentation, it will have a good chance. I actually think videos have made it very easy to pitch. 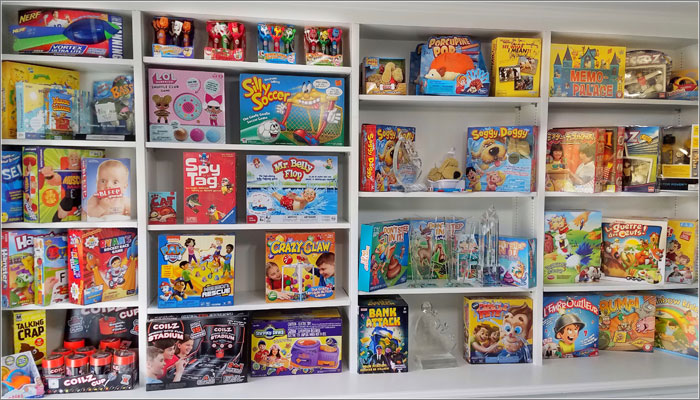 If you were asked to give advice to new inventors, what would it be?
From my experience, persistence is key. It took a long time for me to get going. So, if you like what you’re doing, and are seeing at least some success, and can financially stomach it, then keep at it. My other advice is that if you’re working alone, see if you can find a collaboration partner that has a different skill and can add value to your ideas. Lastly, if you’re not in a big team I suggest finding an area that you want to invent in, and focus on it.

Focus in one area of invention? Why’s that?
It’s very difficult to focus on lots of different segments in the business as an independent – I certainly don’t have the bandwidth! It’s a very hard lesson to learn and it took me a long time… I started in games and then got away from it, trying all kinds of other things. It was only when I refocused on games that things really took off for me.

And – just for the record – which game turned the tide?
It was a gradual build. Every year seemed to be a bit better than the last and I was licensing more and more games. Then Soggy Doggy was picked up by John Adams, then Spin Master and it became a huge hit, even winning Toy of the Year in the USA! On the heels of that was Don’t Step In It from Hasbro. I’m grateful for the amazing job these companies have done with those products, and for having great inventing partners – Steve Calhoun on Soggy Doggy and Bob Driscoll on Don’t Step In It!

Don, I want to thank you for your time. It’s a joy chatting. One last thought: other than yourself, what’s the most interesting thing in your office?
I have two things in my office that helped me believe I could be successful in the business. I have one of the first games I ever made myself – it’s made out of wood! I also have a framed copy of the check for it from Milton Bradley – a small one! The game eventually went nowhere at MB – but that was another good lesson to learn early!

Brilliant. Thank you again Don, and the best of luck with Drone Home: I hope it takes off… Pun fully intended and – to some degree – celebrated.