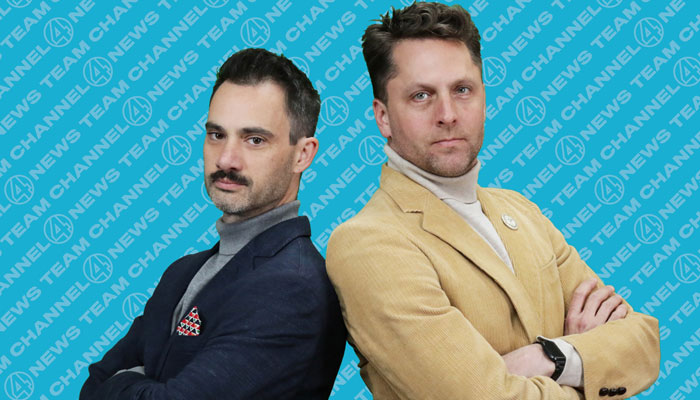 Guys, it’s always great to catch up. Last time we spoke, it was around you guys shifting from a publisher to a creative studio. How has that been?
Barry McLaughlin: Being able to focus more on the creative side of things has been awesome. So far we’ve already licensed three games in the last few months with more on the way!

Jason Lautenschleger: We’re still very involved with developing the games, so we wanted to make sure we could dedicate resources to each of these deals.

Amazing. Can you reveal what they are?
BM: We licensed Game Night in a Can – the first game we ever published six years ago! – to Goliath. They’ll be doing that next year and we’re excited to see it go international with them. We also licensed a game to PlayMonster that’s coming out next year, I don’t think we can announce the name yet… But it’s really fun! And then of course our totally ridiculous current release with Big Potato, Scribble Hips! We’re enjoying working with all three of these partners. 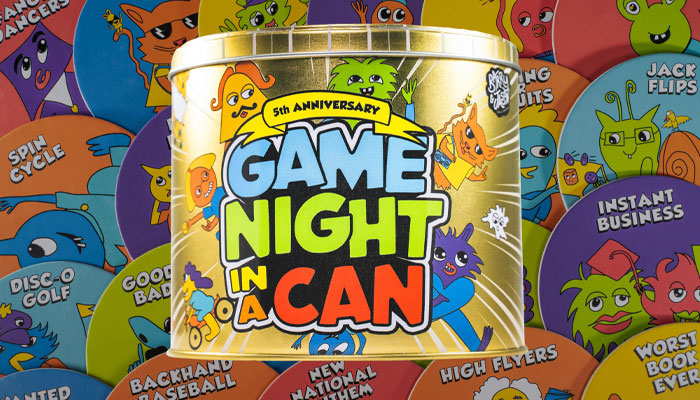 As a publisher, the videos you created around your games were very funny and stylish. Have you taken a similar approach with your sizzles videos now you’re pitching concepts?
BM: Thanks! And yeah, our videos are usually quite silly. My background is in advertising (Hot Wheels, Honda, Red Bull), and Jason comes from TV development (NBC’s Songland), so we love to bring those experiences to our videos.

We got into Barnes & Noble for the first time a few years back by making a video where we put Game Night in a Can in different places around the store, riding the escalator, combining book titles to make phrases… We had a lot of fun with that one.

We also did an improvised pitch video for Books-A-Million where we had a big pile of wigs and kept surprising each other with lots of different Game Night In A Can players. It’s so dumb and I love it to pieces.

JL: Hahaha! I totally forgot about the pile of wigs video — great band name, by the way.
Pretty much ever since we entered the industry, we’ve made a concerted effort to infuse our style of ridiculous entertainment into all we do – but all the while backing it up with great games!

Ha! Amazing. Thanks for sharing those videos! So you’ve adopted a similar approach for your sizzles when pitching?
BM: Yes! For our sizzles, we incorporate a lot of the same silliness, the only downside is that they’re secret so we can’t show them to you yet! Wait a second… We can show our Scribble Hips sizzle. The Worldwide premiere on Mojo Nation!

Haha! It’s a winner. Huge thanks for sharing that with us guys. Always useful to see successful sizzles. Do you try and retain that sense of playfulness in a live pitch too?
BM: Yes! We always try to make sure that at least some part of each meeting is memorable. The first time we pitched to Hasbro’s Tanya Thompson, we did so in a see-thru glass room at a restaurant at Toy Fair.

We were pitching a game called Underpants Apocalypse, which was a series of mini-games that use gigantic underwear. One of the games was called ‘Squirreling Away for the Winter’, and the idea was that you’d have 20 seconds to put as many things as you can in your underpants. She had a gigantic bowl of snacks on her desk, and to demonstrate the game Jason emptied the entire bowl into his giant underpants, one snack at a time. Tanya was – and still is – a great sport.

JL: I think I owe Tanya a bowlful of snacks and a voucher for therapy.

Ha! And did you ever get anywhere with Underpants Apocalypse?
BM: No, we discovered there was already a game out called Fill Your Pants. We don’t ever want to be derivative of someone else’s idea, so we just dropped it when we saw that.

Ah, of course! That’s invented by the lovely Geoff House. Have you met?
BM: We haven’t, but if he invented Fill Your Pants I imagine we’ll get on quite well. Hi Geoff!

I think you will! We saw the sizzle for your new game with Big Potato, Scribble Hips. Talk us through how that came to be.
BM: We were seeing drawing games where the pen was in different places and Jason said, “What if we put it lower, and lower and yep, there it is!” That was pretty much it – it’s so simple.

It started life as an adult game, but then we decided there was no need. We were going to manufacture it ourselves and we were at ASTRA when several retailers convinced us that it didn’t have to be an adult game. It’s just silly and fun.

JL: It’s a drawing game where you don’t need to be good at drawing. There’s nothing suggestive in the content and we saw first-hand that tweens and teenagers were having a blast with it too. 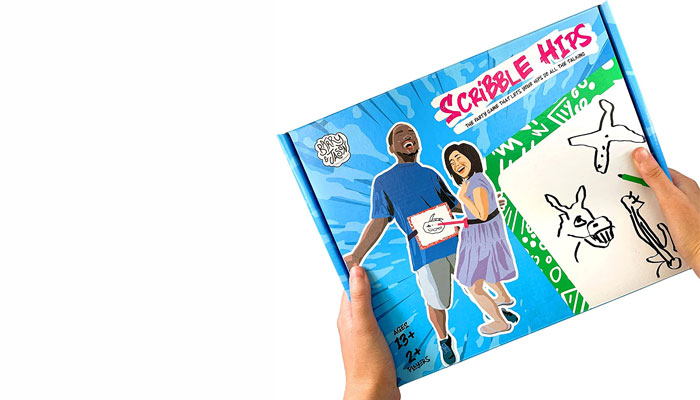 Interesting. So that adult theme was just in the dressing? The game was pretty much the same?
JL: Yes. We first pitched the game to Target in early 2020, and it was originally called Pencil Dick.

Ha! Of course!
BM: Bridget Kenney was the games buyer and she thought it was hilarious. She never actually said it would go on their shelves as such, but we always had fun making her and our sales reps Jaime and Geoff Wolanski laugh about it. We then went through a whole host of other names, and later decided to clean it up and make it Scribble Hips. It’s more like an extension of your belly button really. Our tagline is ‘The game that lets your hips do all the talking’ and you actually do get into some muscles that you’re not used to using. It’s a good workout!

Big Potato feels like a very natural home for the game.
BM: They are the best! We love their games, good vibes and marketing magic. We’re so happy to be working with them. An extra bonus is that we developed this game beforehand with Gavin Waxkirsh and the GW Dev team, who are also Big Potato’s manufacturing partner… So when we licensed to Big Potato the transition was smooth and easy. 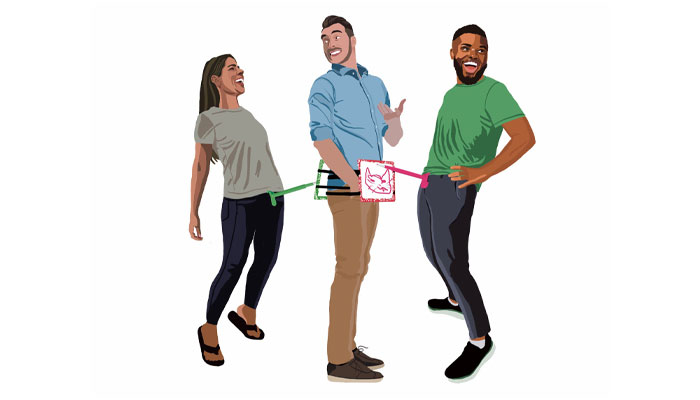 Great stuff. And before embracing the inventor life, you did get one other self-published project off the ground – It’s Tricky. What can you tell us about that?
BM: Yes! We developed this with TikTok’s most famous card magician Evan the Card Guy. We worked with him and an entertainment company called Wheelhouse on something else, but thought a game would be another great way to collaborate.

JL: It’s Tricky comes in a little box and it’s essentially a regular deck of cards, except each number card has a mini skill or action game written on it. All of the face cards have QR codes on them that, when scanned, bring up video challenges and other content, like @TheCardGuy doing a trick or teaching you some cardistry. They’re all fun games – like there’s one where you pull out a bunch of number cards, make up a phone number from those and then call that number. If someone answers, you get points! And about 50 other fun new ways to use a deck of cards! 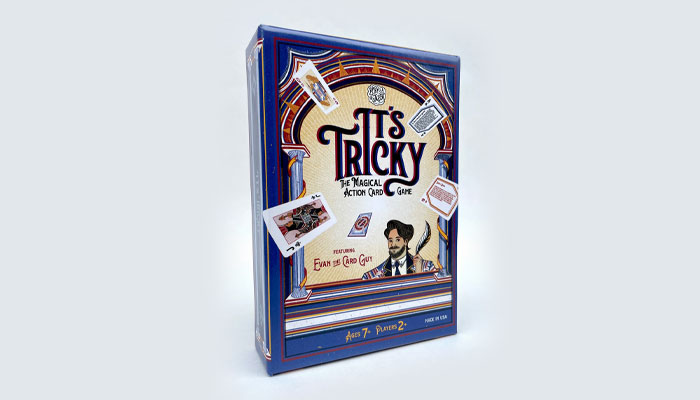 Before we let you go, for any companies that haven’t met you yet, what sort of concepts would you say you specialise in?
BM: We aim to inspire creativity, laughter and competition, and we always try to do so with sustainable materials and clever design.

If you’d like to meet the team, please reach out to our VP and MVP Cassie Slane Guglielmo at cassie@barryandjason.com. Speaking of Cassie, she not only does a million things as part of the team, but she is also a live weekly expert on Fox 29 Philadelphia! Fun fact.

Amazing. Guys, a big thanks as always. Let’s catch up again soon.