Ben Callicott on the launch of the Toy Pioneers Club, a new online community for the world’s most forward-thinking start-ups 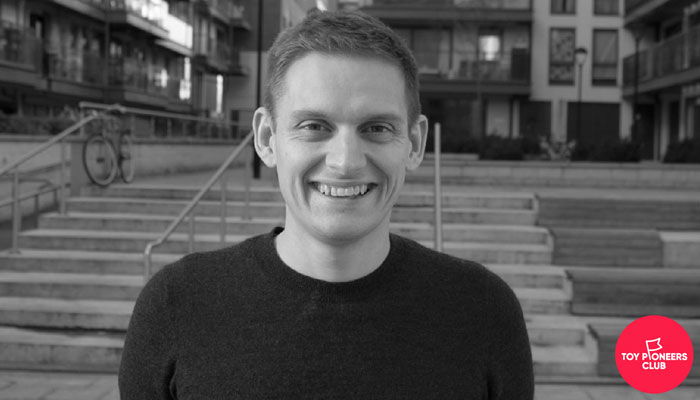 Ben Callicott has been in the toy space for over ten years; going from designing children’s playgrounds to spearheading product at innovative tech-toy start-up, Primo Toys.

Having become disillusioned with the mass market toy space, Callicott has now launched the Toy Pioneers Club, a new online community for ‘the world’s most forward-thinking start-ups’.

We caught up with Callicott to learn more about the Toy Pioneers Club, and how he sees it helping to fuel innovation in the industry.

What’s your history in the world of toy design?
I have been in and around the toy industry for over 10 years now. Starting out designing children’s playgrounds, before going on to work as a toy designer for Mothercare/Early Learning Centre out in Hong Kong. This opened my eyes to what ‘made in China’ really meant and the world of mass market.

It was after this experience that I became somewhat disillusioned with the industry, and all the ‘me-too’ product. So I left and developed my own toy, PL-UG, a den-making toy which I fortunately went on to sell after many ups and downs.

Most recently I was head of product at Primo Toys, an EdTech startup where we launched a $1.6m coding robot on Kickstarter. I’ve been fortunate to experience nearly all sides of the toy space.

What is the Toy Pioneers Club?
The Toy Pioneers Club is an online community for the world’s most forward-thinking start-ups. It’s a home for the dreamers, the forward-thinkers, and the innovators – those that are putting the child user at the centre of their universe. It aims to provide the tools, resources and connections to enable start-ups to go on and build radically better products and businesses to the ones that exist today.

Why did you launch the club?
The truth is I don’t like what the mass toy market stands for; it is just not an industry that I can relate to. If we are to put toys out into the world then they should be meaningful, innovative and serve a purpose. There is too much of a disposable culture, and toys treated purely as commodities.

Is the industry in a good place creatively, and how do you envisage the Club helping to fuel, and push, innovation in this space?
I really do think the industry is then best place it has ever been. With the rise of the maker movement, ability to build in low batches and launch through crowdfunding platforms, we are seeing a wave of start-ups and ideas coming through that we just wouldn’t have before. The Toy Pioneers Club is there to support them in getting to market and out into the wild.

How can interested folks get in touch to join, or learn more?
Pioneers come in all shapes and sizes, so if you’re a start-up that wants to grow, an industry expert that wants to share, or a service provider that wants to help then register your interest with a few details at www.toypioneers.club, and let’s continue the conversation!