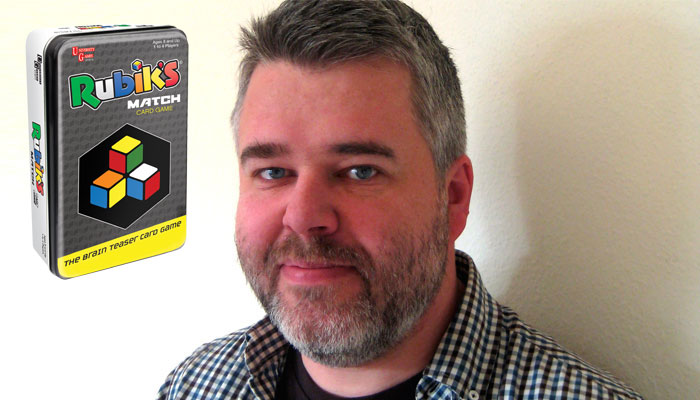 Last year, Mojo Nation partnered with Rubik’s to host one of its Design Challenge events. These see designers tasked with creating concepts for a brand, before pitching their ideas directly to the licensor in the hope of bringing new product to market.

The Rubik’s Design Challenge saw a selection of designers given two weeks to develop game concepts based on the iconic Cube, before pitching them directly to the Rubik’s team.

Brett J Gilbert, the designer behind such games as Raids, Café Fatale and City of Rome, came along to the Challenge with his game prototype (then called, Rubik’s Mosaic). The Rubik’s team loved the concept, and it’ll be hitting shelves in July courtesy of University Games – under a new name: Rubik’s Match.

We caught up with Gilbert to learn more about where the idea came from for his Rubik’s card game, and whether the constraints of a Design Challenge event helped or hindered his creative process. 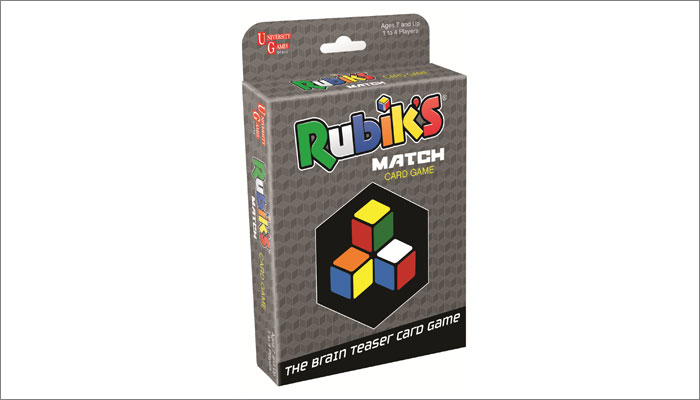 Can you talk us through where the idea came from for Rubik’s Match?
For me, the starting point was the colourful and instantly recognisable isometric design of the Rubik’s brand. The Cube itself is incredibly familiar as a three-dimensional object, but the two-dimensional graphic design of tessellated diamonds, twinned with those six very specific colours, is equally iconic.

How could I use this graphic language to create a game? My first instinct was to imagine hexagonal tiles within a pattern-building game in which specific combinations of colours or shapes could score points, but my ideas seemed fussy and uninspiring.

Instead, I felt I needed something immediate and clear – and also smaller and less bulky than even a simple tile game might have been; plus, I quickly realised I wanted a concept that directly mirrored the puzzle-solving of the Cube itself.

With those ingredients and constraints in place, I very quickly devised a set of components and a working model for the game. A huge part of the challenge of game design is understanding and defining exactly what the question should be – and if you can find the right question, sometimes the right answer can manifest itself almost effortlessly.

Well, maybe it’s never quite that simple, but it can seem so in retrospect.

The product came about as part of Rubik’s Design Challenge event. Did the constraints of this format help or hinder the design process? Or make no difference at all!?
The opportunity to pitch to Rubik’s was an unmissable one, so the fact that the Design Challenge came with such a short timeframe was perhaps the most impactful part of its structure. I didn’t have very long at all to make something that I might consider good enough to pitch.

Having such a clear target – and not very long to hit it! – is very different from the usual experience of developing my own game concepts. Often you are designing into and for a vacuum: the great void of unpublished games. This gives you immense freedom, but absolutely no direction – and no hint of a deadline either.

Some designers, I think, thrive much more readily in that environment than I do. Give me a problem and I can set about solving it. Deliver me a question and I’ll do my best to fathom an answer. So, this Design Challenge, and its short turnaround, really helped to focus the mind and open up a creative potential that otherwise simply would never have been explored.

That was exciting and energising, and I am genuinely proud of what I made.

Does your approach to game design change much when dealing with a brand?
I have not, yet, had very much experience of designing with a brand in mind, but it seems clear that a first step must be to really dig into what that brand represents.

It might be easy to mistake a brand for a logo, or just a set of graphic elements, colours, characters or slogans – but I think it’s the designer’s job to look a little deeper and try to make something meaningful and authentic. Hopefully I achieved exactly this with Rubik’s Match.

Finally, but maybe most importantly, are you any good at solving the Rubik’s Cube?
Yes, I can still solve the Cube! I taught myself a technique using just a few algorithms many years ago and whenever I pick up a Cube I always discover that the muscle-memory is still there. I still vividly remember how truly magical and exotic the Cube seemed when it was new – and that sense of wonder has stayed with me.