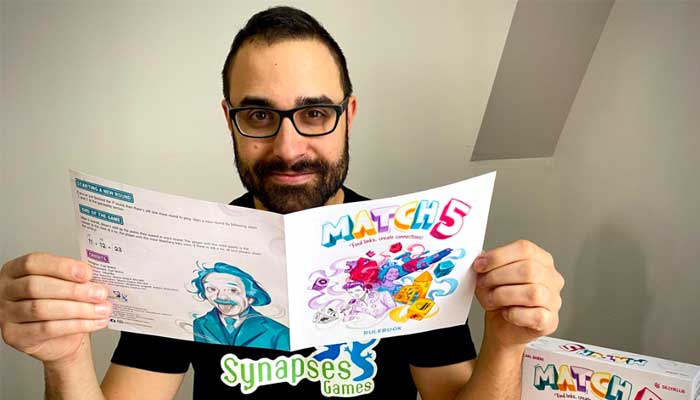 Carl, it’s great to connect. To kick us off, how did you find yourself working in games? Was it a passion from an early age?
Not really! As a kid I played chess and Dungeons & Dragons, but I wasn’t into board games.

I studied science and worked in the pharmaceutical industry. At one point, I went back to school and during my studies, to make money I worked in the warehouse of a board game distributor in Canada. Every lunchtime we’d play games, and I really enjoyed it! It was great introduction to the new wave of board games.

Once I finished my studies, they offered me a job as a sales rep, but I didn’t know anything about sales or board games! That said, I did it – alongside my other job – but after two months I went all in on the board games and have been working in the industry since 2010.

At what point did you launch Synapses Games?
I launched Synapses Games in 2018. I’d worked at places like Asmodee and CMON, and I wanted to have my own projects. I’d learned about manufacturing, publishing and distribution from my previous jobs, and I thought it’s now or never. So that’s when, in 2018, I launched Synapses Games. We’re now at three full time employees and our games catalogue is growing.

Great stuff. What game did you launch with?
Our first game was called Incubation. You collect dragon eggs, put them in your incubator and eventually they hatch. It’s got some push-your-luck elements and set collection. Since then, we’ve got close to 10 different games in our portolio. 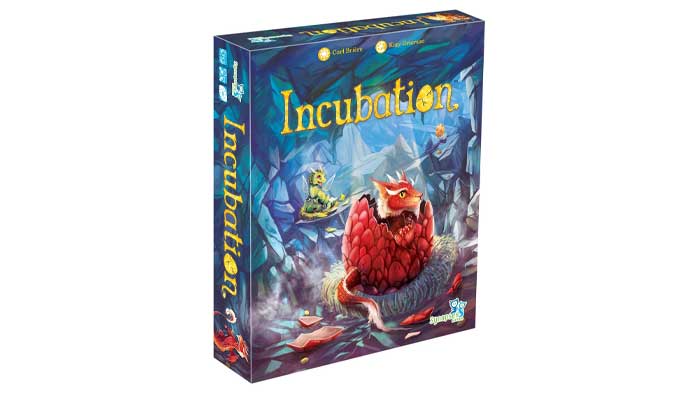 And it’s quite an eclectic selection! Party games, strategy games… What makes something a good fit for Synapses Games?
Well, I’m not a ‘hardcore’ gamer. I don’t play big eurogames that last three or four hours – it’s not for me. I really enjoy games that you can play with everyone, that last no more than an hour.

For us, it’s important that even if you’re playing with non-gamers, a gamer will enjoy that experience, so some strategy is important. Match5 is a good example, and so is Coatl – it’s complex, but not too complex. Gateway games, party games, family games – that’s our area. 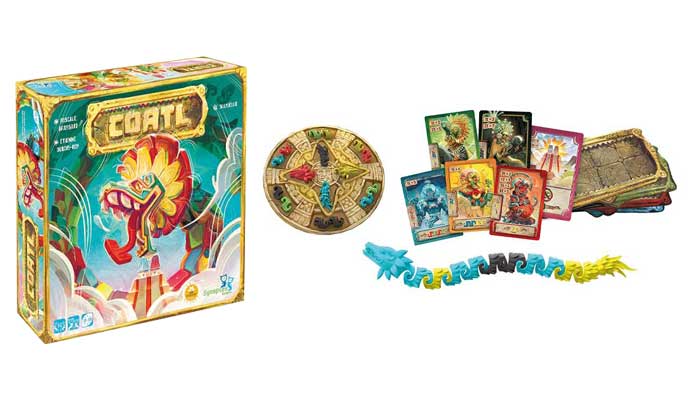 It must be a difficult tightrope to walk, creating games that are complex enough for gamers, that won’t intimidate non-gamers…
My girlfriend is not a gamer at all, so the games have to be interesting enough that she will try it. The games have to be concise, with only a few rules. It’s about bringing new people into gaming, who might go on to buy one or two games a year. And that’s a great thing.

You mentioned Match5 a moment ago; it’s a great example of this kind of crowd-pleasing game. It sees players attempt to find common links between icons on a series of dice. For example, players could link ‘Fruit’ with ‘Body part’ by writing ‘Adam’s Apple’. Talk us through where the idea came from and how it plays.
I was playing a word game on my phone, and that inspired the idea. At Synapses, we work internationally, so adding text to a game is always complicated as it introduces translations. That’s why we used icons instead of words. We needed broad categories so that it would always be possible to make connections. I started with that, and it developed very quickly! 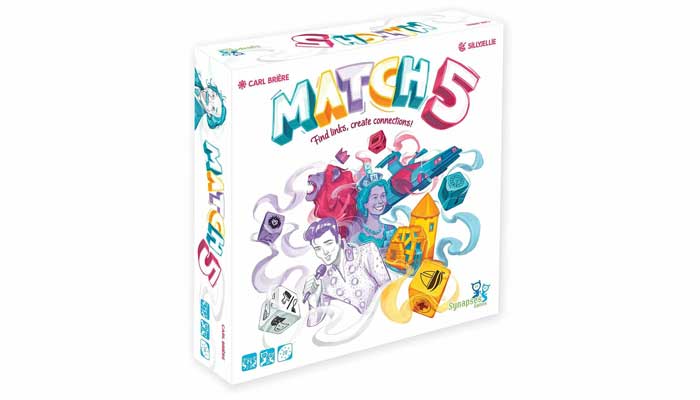 I mocked up some blank dice with categories written on and took the prototype on a gaming weekend. Most people there were from the industry, and I tried the game with a friend who really doesn’t like playtesting prototypes – because they’re not polished, not neat… But he did play the game, and he played it three times in a row! It was a good sign!

When I came back, I started writing all the categories properly, and that was tough. You want some combinations to be simple, and some to be quite hard, so that it’s satisfying to find an answer. That was tricky to do.

We then added the twist that you get an extra point if your answer matches with at least one other person around the table. It really changed the sorts of links that people were trying to find. If the category is ‘Disney’ and ‘Beginning with A…’, we might say Aladdin, but if we’re playing with a younger group, we might say Anna from Frozen. It pushes people to think differently and brings something unique to the game. 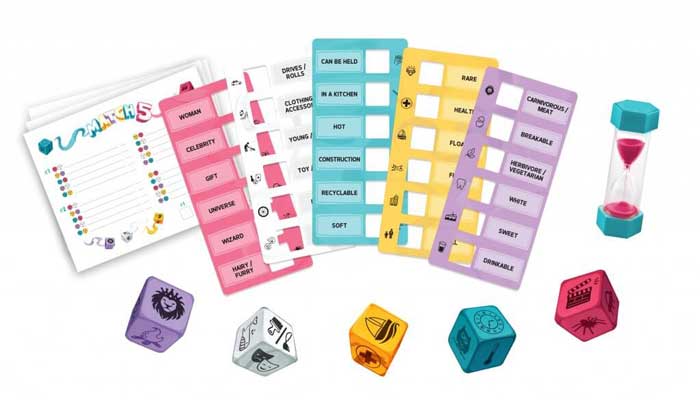 Do you license games from inventors or is everything designed in-house?
Yes, we work with inventors. Our new game Draw the Line is invented by Jay Cormier and Chase Disher. It’s not only an acting game and it’s not only a drawing game; there’s more going on. And everyone plays at the same time, so it’s extremely engaging. We’re excited about it! 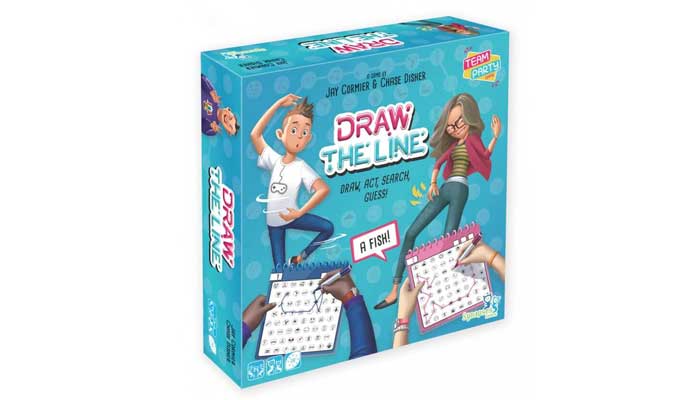 Where do you go to meet inventors?
It’s usually during conventions, but also through our website. Every week we get receive three to five new game proposals from designers around the world.

Wow! And what makes for a good pitch?
An inventor has to be able to explain why a game is different. What’s the hook? Be it theme, gameplay, mechanics… It needs to be unique, or at least grab attention. Then, you need to have more than an idea. Lots of people submit games to us that are just ideas… There’s no rules! You need to work at the idea and make it into a proper game.

It’s also good to have a short video or a sell sheet for you game, and it’s great to have done some research on who you’re pitching to and the sorts of games they publish. It’ll be a smoother process and you’ll probably get better results.

Great advice. Carl, this has been great! One last question, what helps you have game ideas?
For me, it comes by playing games. Something might jump out as being unique, or not well balanced, or provoking a certain emotion. I like to observe the way games are played. Look at something like The Mind – how does a simple game like that trigger such a response? Or something like MicroMacro: Crime City. It’s unique, even as a super simple concept. It’s about how you could use elements of games in different ways and improve on them.

I like to work with designers and inventors on their vision, and then bring in some of my own vision, and hopefully it’s a good fit. We then look at what we want to accomplish with the game and develop around that.

And what kills creativity for you?
Sometimes, after working on a game for a while, if something’s not going in the right direction, it can difficult to work out exactly what that is. It’s often because I’m too close to the project, and that’s why we like to work on several projects at the same time. It means I can put some ideas away and come back to them later – and doing that helps so much!

When I’m too focused on something, I often don’t see the bigger picture, and that includes the mistakes. It’s good to take a step back sometimes.

Carl, a huge thanks again for taking the time. Let’s chat again soon!