Deej Johnson and Billy Langsworthy on unearthing the secrets of creativity in their new book, The Snakes & Ladders of Creative Thinking 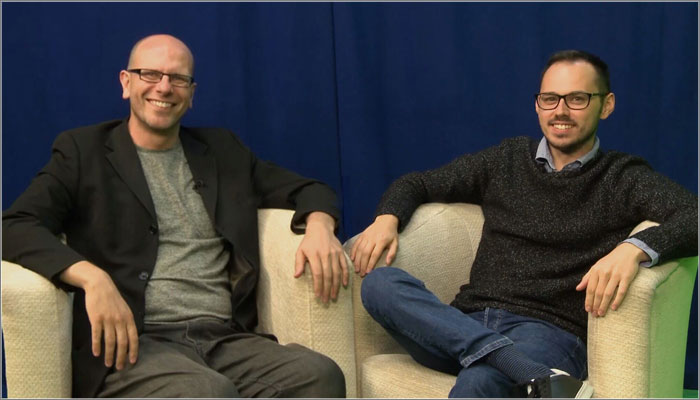 Writer and speaker Deej Johnson is a creative consultant with five books to his name. His latest, co-authored by Mojo Nation founder Billy Langsworthy, explains how to apply creative techniques to the invention of board games. 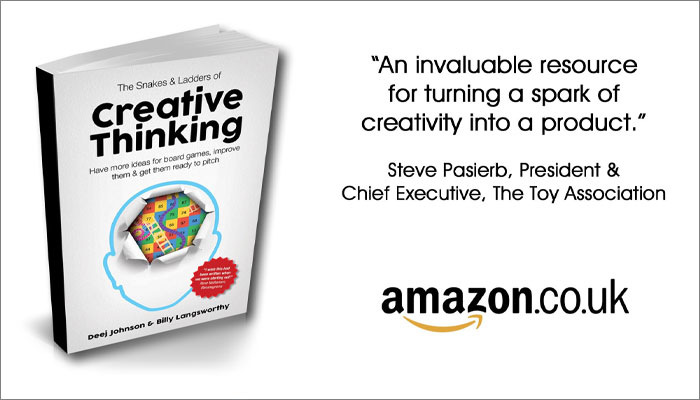 This could be a bit odd seeing as we both write for this site! Let’s start it like a normal interview and see how quickly it falls over. So! Deej Johnson: writer, creative consultant and author… How did you end up working in toys and games?
Complete accident. I’d made – for a video-production client – a Rube Goldberg machine; a chain reaction machine… It was built out of toys and games and ended with Bananagrams tiles falling over to spell a message.

Happily, the Bananagrams PR person, Lesley Singleton, saw it and asked to meet about making a how-to-play video. We got on very well, so I wrote a script for that. That led to my rewriting their packaging tag and instructions… Eventually I wrote a book of tips about actually playing Bananagrams.

Your first book?
Second! I did one previously on performing magic tricks over the phone.

Magic tricks over the phone? Walk us through that!
Okay, so you might be sitting at home. I’d call you up. I’d say, “Would you like to see a magic trick over the phone?” Obviously, you’d say “No”… But I might talk you into it! And then I’d have you grab a pack of cards, or a handful of coins, or whatever, and we’d do a trick. You’d fool yourself at my behest.

Is there much demand for that, then?
No, not that I’ve found! My feeling was that, as a branch of magic, it was just hugely under explored. After I finished exploring it, I realised why.

Okay… So you did a book on Bananagrams…
Yes; two editions of that. And by then other people had started to approach me about making their game instructions more concise. That inevitably led to my giving feedback about the games themselves. By the time those ideas started reaching the shelves I was offering a lot of free consultations – which I still do – but I was answering exactly the same questions, over and over again…

What kind of questions?
Things like – well you know, of course, because you get them yourself: I’ve got an idea for a game – what should I do? What’s step two? How does licensing work? Where do I pitch games? How do I pitch? Should I get a N.D.A. signed? That sort of thing. And some of these meetings would be discouraging because the client only had one idea for a game. Quite often that meant they’d be very defensive about it… I frequently left thinking it was a shame, because people can have one great idea – but that doesn’t mean they’ll get to market without another layer, or a different plot or what have you.

And that’s the reason for writing the book?
Kind of… I’d been toying with the idea of writing a book on ideation anyway because I passionately believe that creativity is at least as much a science as it is an art. I wanted to give people hints and tips on how to have more ideas, but also make it quite a light read, and fill it with quotes from really-smart people. So that was in my mind for a long time because it’s fascinating to me – I just needed an interesting angle.

Is this where I come in?!
Yes, and this is where the whole interview could fall over – I could just as easily start interviewing you now! But yes, you and I met and it was clear our interests overlapped. When I started reading your interviews with inventors at Mojo Nation, I was hooked! Over and over again, you were lifting the lid on toy-and-game inventors saying: “This is how I got product X to market!”

Product X: good name for a game!
Write it down! In those articles, though, no one ever said: “This is a duplicable technique” or, “This is a specific process…” So I figured that might be the angle… The interviews would make it a well-rounded book: inventors telling readers what they’d done, and us explaining how others can do it.

To be clear, the book combines interviews with creative techniques?
Yes, the first part has tips and techniques about how to have more ideas for board games, improve them and get them ready to pitch. And these are reliable creative techniques that have worked in numerous industries for years and years, but specifically as they apply to board games… The second part is full of your interviews with the inventors of existing board games. There are also footnotes, identifying exactly which techniques those inventors are referring to when they speak.

Sounds good. I should read it… Is it aimed more at new inventors, or pros?
Good question! I don’t think it’s that black-and-white, though. I’ve seen some new inventors that are just teeming with ideas… I’ve also seen published inventors that don’t know how to have their next idea. So I think everyone can get something out of it because I absolutely believe that having a lot of ideas is half the secret to getting to market.

Whose interviews did you include? And why?
Let’s deal with the why first… Because it’s fair to say that, when I first suggested this, you’d already done so many great interviews: we really were spoiled for choice. So it started with the articles that I felt most clearly showed specific techniques at work. There are also insights about how some absolute classics came to be: Mousetrap, Operation, Twister, I think is there; Connect 4.

And which interviews made the cut?
There’s a lot of great people in there: the people behind Exploding Kittens, Pandemic Legacy, Obama Llama, Kingdomino, Happy Salmon, Monopoly: Electronic Banking, Hail Hydra, Don’t Step In It, Junk Art, Chow Crown, Wingspan, Rubik’s Cage… Terrific people! I also added new interviews – Sally Jacobs, for example. Sally’s interview I think – I know this is a cliché – Sally’s interview I think is worth the price of the book on its own. She just talks so much sense. Brilliant stuff…

Then there were a few people that I wanted to follow up: Ken Gruhl of Happy Salmon, for example, and The Sock Game boys. One of the inventors of Muso DJ I expanded on, and Graeme Fraser-Bell from Accentuate. I wanted to expand them because their stories show specific things about the industry; their stories are typically atypical!

So anyway, the point being that I wanted to make sure there was plenty of brand new and exclusive material, too. That’s because I feel quite strongly that knowing how an inventor invents is only a small part of the equation when you try to get a game to market… 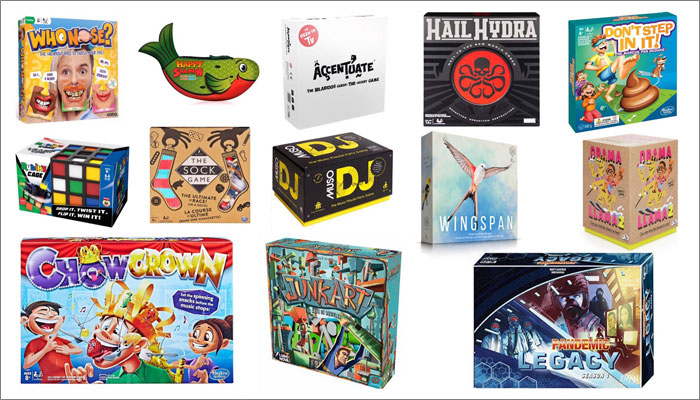 What else is part of that equation?
Oh; so much! We could write a book on it… It’s stuff that you know, Bill, and – not to blow smoke up your arse – it’s stuff that I think you and Adam Butler are making much more visible, and much more accessible, through Mojo Nation… Where do ideas come from? How do you have more? What’s the most important quality for an inventor to have? What do distributors look for in a game? What makes games a definite “No!”? What’s the point of an N.D.A.? What do retailers know about your idea that you don’t?

That last one is a really big deal isn’t it?
It is! People can talk theory until the cows come home but if you don’t see an idea the same way a retail buyer does, you aren’t ever going to get in a bricks-and-mortar store. So I really wanted to speak to some retailers and get their insights… I can’t believe how little thought some people give that part of it.

Hence our speaking to Lucy Benham from John Lewis…
Exactly! That interview was amazing. I mean… There’s this wonderful buyer who really knows her stuff – and people in the UK industry know that she knows her stuff. She gets out and pushes! She walks around toy fair; she looks for new ideas. She gives great feedback… You can ask her opinion and she’ll give it. She’s helpful; very generous to new inventors and professionals alike. Phenomenal insight… We booked an hour with her – she gave us two! I don’t really need to tell you how terrific that was, of course, you were there.

I was there – white as a sheet when I thought it didn’t record…
You looked like The New Schmoo! Still, we can laugh about it now, can’t we? No? Okay… Anyway, to answer your original question, there are interviews with professional inventors, and new inventors that got deals through Mojo Nation events; there are conversations with lawyers, retailers, and a hypnotherapist… Oh! There’s also a piece with the crowdfunding guru Heather Delaney. That’s fascinating. You just don’t know what you don’t know…

But Heather Delaney knows!
Absolutely… When Heather Delaney’s around, you can aspire only to being the second-smartest person in the room. But I think the point you make about crowdfunding is really important as well: it’s one way of getting started but it’s not a panacea; it’s not a miracle pathway to market, is it?

No: it’s just one way to self-publish ideas. It can be great, but it’s a lot more work than some people would think.
You realise we switched? I’m interviewing you… So – Billy Langsworthy – is there anything else you want to add?! Did I miss anything?

I think we should thank the people that contributed… Not just to the book but to all Mojo Nation’s interviews, articles and events as well. People are very good with their time.
You’re absolutely right: the people in the toy-and-game industry are unbelievably lovely. Alright… How do you think we should wrap things up?

With a shameless plug…
Shameless plug! Okay. The Snakes and Ladders of Creative Thinking is out now; whether you’re a first-time inventor or pro, it helps you have more ideas for board games, improve them and get them ready to pitch. Then the link…

If you’re in the UK, you can buy the book here

If you’re in the US, you can buy the book here