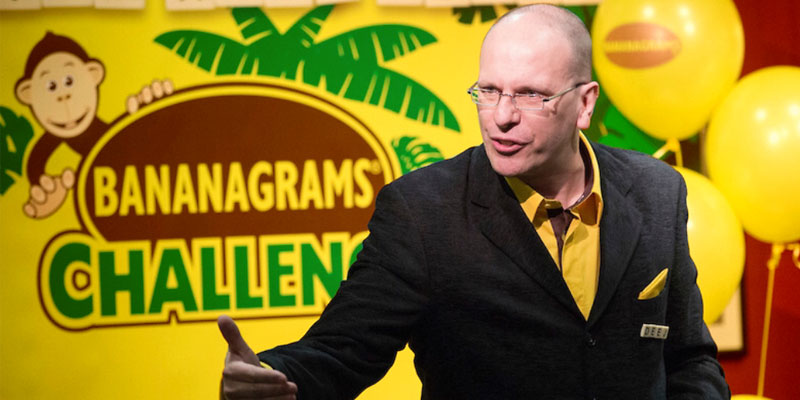 Everyone struggles with a form of creative block at one time or another, but what’s the best way to get through it?

We caught up with Deej Johnson, creative consultant and the author of The Little Book of Bananagrams, to find out his top tips on how toy and game designers can keep their creative juices flowing.

What can designers do to keep their creative juices flowing?
The one piece of advice that sums up my attitude is a quote by Thomas Edison: “To have one great idea, have lots of them…” In practical terms, that’s not as glib as it sounds; the same sentiment compelled everyone from da Vinci and Darwin to Turing and Einstein to do exactly the same thing: just carry a notebook and pen…

As simple as that?!
Yes! People often roll their eyes when I say, “Carry a notebook” – I think they want a more gimmicky answer, or something less effortful… But the difference between the have-a-little-think amateur and a habitually creative person starts with nothing more than the discipline of writing down every idea you have.

Everything? Good, bad, indifferent?
Absolutely! Writing ideas in a notepad – and I mean physically writing them – does three things: it lets you remember ideas, it helps you process ideas and – crucially – it encourages your brain to have more ideas. Every time you jot something down you reinforce the importance of your output. So good, bad, indifferent: writing it down helps generate ideas.

At what point do you start sorting the wheat from the chaff?
I’m not sure I’d phrase it like that. There are ideas that you’ll immediately see a use for and there are ideas that you won’t immediately see a use for. But while they may not be right for one particular project or client, it doesn’t mean they’re bad ideas. Obviously, though, if you have a lot of ideas around one theme then there are things you can do to work out which is the most suitable.

For example?
The best approach – by far, in my opinion – is an Edward de Bono system that he calls Six Thinking Hats. It’s a simple-as-can-be way to think about the way you think. He wrote a short book on it; it’s brilliant… You can read it in the morning, try it in the afternoon, and change the way you think forever by the time you go to bed!

Do you ever get creative block?
No, not as such. What people rather pretentiously describe as a creative block is usually the result of nothing more than a set of circumstances in which it’s harder to come up with something… But that’s completely normal; totally natural. It’s just a question of how easily you can change your perspective and look at any given situation from a different angle. There are dozens of different ways to do that. From my training in clinical hypnosis I know that being able to relax deeply always helps people kick start their creative ‘mojo’. There are studies, though, that show laughter, specifically, is a truly fantastic fix. So next time you’re stuck for an idea you can look into it: gelotology – the study of laughter and its effects on the mind and body… That, or stick on a DVD of Airplane!

Deej Johnson is a creative consultant and the author of The Little Book of Bananagrams. He is also brand guardian at DMI Productions and predominantly uses his writing and consultancy skills in the board-game and media-production industries, with toy clients including Bananagrams, Accentuate, Playtime PR, Ooba Toys and Sussed. He can be contacted at deejwordwhizz@gmail.com.