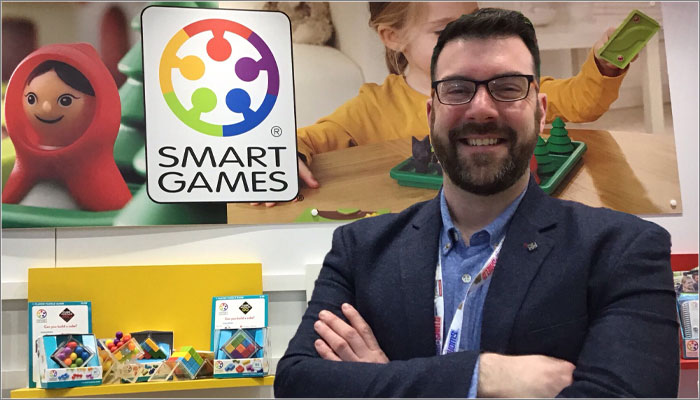 With 20 years in retail, and nearly five in the toy-and-game industry, Rory Kelly’s experience includes time at Coiledspring Games as an executive, and as a champion of Wrebbit’s 3D Puzzles.

Now Rory has started his own distribution company and consultancy, Red Knight Toy Group. We wanted to know what the heck he was thinking… 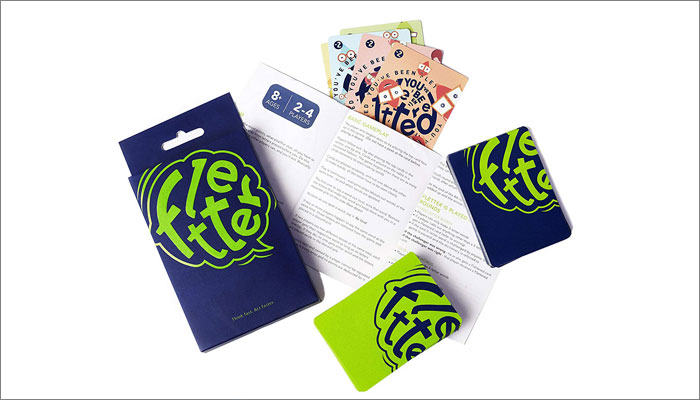 Mr. Kelly: always a pleasure! You only recently founded Red Knight Toy Group. For those that don’t yet know, what is that?
Yes; officially we registered as a limited company on July 4th, 2018. The date wasn’t intentional, but I like claiming it now as my Independence Day. In short, Red Knight is whatever my clients need it to be. The official line, though, is that it’s a commercial agency and small distribution company specialising in the toy-and-games industry. I’m also branching out into my first love, which is the book industry.

Oh wow, okay! Where do you start with that?
I’ve just started representing two new children’s authors, Anthony Cooley and the brilliant Rebekah McCrorie. I’m seriously excited to have her on board… Did I mention that she’s only 13 and already onto book three?!

Surely there are plenty of consultants and distributors already though… Why set one up?
That’s an interesting one! Between us, it had nothing to do with me turning 40 last year! If I’m honest, I didn’t start out with plans to start my own company, but it naturally seemed to evolve in that I was being approached by a number of international clients who were actively looking for representation in both the UK and Ireland.

I always say I’ve been hugely fortunate… When I joined the industry, I spent a few incredible years working with amazing brands like Rory’s Story Cubes and Coiledspring Games where I got to know the international market quite well, and remained connected to many of the publishers. I think they also liked the fact that I had a long retail career behind me before the toy industry, so I try to see how their products could work in the retail space and then we set about planning in how to get them there.

Retail is a terrific training ground! In terms of product, for what kind of titles do you look?
I want to make sure we represent the best educational products we can find from international publishers, and am honoured to be trusted by great publishers like SMART Games and Toys, Brain Games and BINCA. I’m also personally delighted to work closely with Alexandra Ehrmann at the incredibly-fun History Heroes… Plus there are some great products for the upcoming Toy Fair season.

Generally speaking, what makes a great toy or game, do you think? What’s the secret ingredient that gives you a buzz?
A great game is one that you want to pick up off the shelf and play again with the same joy that it brought you the first time. I had to laugh the day after Boxing Day, actually… I took my two sons to our local board-game café. They ended up picking and playing WordStacker and Farm Rescue – even though I represent both games and have them at home! I think that illustrates the answer… And Farm Rescue is such a lovely game! 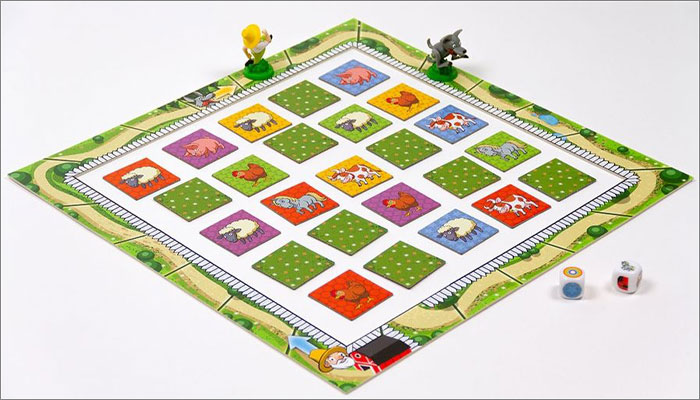 It really is. Cute and simple, but always well-received…
I remember how well games like Kingdomino and Sushi Go Party were received when I was at Coiledspring Gamesand to me, those games also have the secret sauce. That was part of the power of working alongside Roger Martin at Coiledspring. He has a fantastic ability to pick up game rules in minutes, and have a table enjoying it straight away. I try to take that approach when getting a demo of new titles. What personally pleases me is a game where I can learn the rules within a few minutes, and be laughing at the game play just as quickly.

We recently interviewed Roger… Presumably you worked with him on Wrebbit 3D Puzzles? You’re well known for your great work on that brand. How did you keep it fresh?
Thank you, too kind! I can’t claim any praise for keeping the brand fresh, though: that belongs to the team in Canada… They seem to have a magic finger on the pulse and are willing to find the best partners in the licensed space to collaborate. I loved working with Jean Théberge and the team; a fantastic group and their products are a joy to work with.

What’s their secret, then? What makes that team tick?
Through my time working on the brand firstly alongside Coiledspring and then directly with the team in Montreal, I was always impressed with how much passion the design team put into each puzzle. That made it easy to bring such a fantastic range to buyers and distribution partners. I knew they’d respond to the ranges for their territories… Naturally, the Wizarding World Harry Potter Collection appealed to the eternal bookseller in me.

What was the first Red Knight Group product to make it to market? And how did that change your view of the business?
I had a lot less grey hair before the first product made it to market! Beyond that, I knew it was never going to be easy. A lot of the last year has been a massive learning curve. You have to learn fast and remain pretty agile. The first new product we brought to retail was FLETTER from BINCA Games. Since it was a completely-new product, I needed to find buyers who were willing to take a chance on a small, unheard of educational game… And from an unheard-of distributor! Thankfully, we got a positive reaction: firstly with a number of indie retailers, and then listing in some other larger stores.

What I had to learn quickly was that getting a listing from any of our retailers was half the battle… I then needed to find and set up a series of logistics partners to help get the stock imported, warehoused and distributed. The power of the network in the toy industry is so strong, though, and usually everyone offers positive help – you manage to get through it.

From your perspective, what do inventors need to keep in mind when developing ideas to show people like you?
Honestly, for me, it comes down to just two key ingredients: passion and simplicity. The best products I’ve seen this year – such as KASTLES – the medieval card game from Gunpowder Studios, and DooDad from Good Games Company– are games you want to play over and over again after you first discover them.

I’ve found that when inventors genuinely love what they do but keep focused on designing for the end user to have fun, then they have a winning product. SnowMan Dice from Brain Games had that magic touch… It helped lead to a John Lewis listing which has been one of my proudest moments for the business this year. That’s all thanks to the amazing Lucy Benham for being so receptive to a prototype demo. The game is simple, fast and makes people laugh and you can’t hope for more from an inventor.

If Mojo Nation got a pound every time somebody praised Lucy Benham, we’d hardly need to work! And in your experience, what’s the worst mistake an inventor can make?
I’ve had sleepless nights when I discover an inventor has printed high volumes of a game before they’ve had it properly play tested or shown it to potential retailers… I think the Kickstarter craze has helped new publishers in particular get their product produced, and I know it’s incredibly rewarding to see that first batch arrive… A lot of the time the reaction outside of Kickstarter just doesn’t go well, though, and I’ve seen clients left with a lot of stock needing to find a home – usually at a discounter.

Oh, gosh. Yes…
So the biggest mistake, it seems to me, is not seeking feedback from as wide a field as possible. Don’t design a game with only other board gamers in mind as you narrow the product’s opportunity.

Couldn’t agree more. Is there a secret to having good ideas, do you think?
Great question… I think just be continually creative, and surround yourself with like-minded people. I’m currently helping launch a new concept product called Cognitize – The Learning Card Game. It’s a professionally-based card game developed by my friend, Scott Leiper, a learning professional… The range of games for which you can use the cards helps businesses and individuals continually challenge themselves and develop their skillsets. 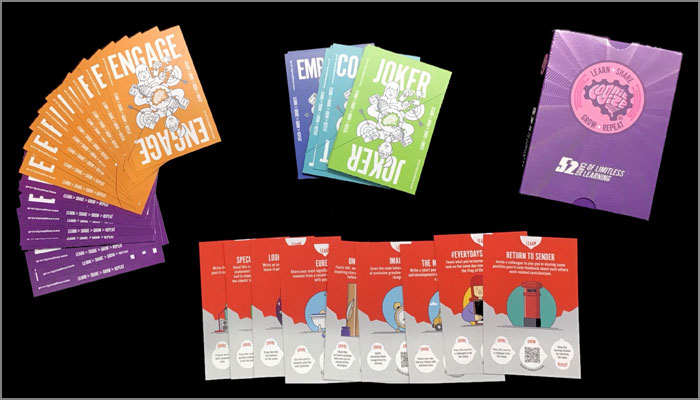 So it’s a card game that helps you develop business skills?
Yes; it’s a really neat, innovative product that gives access to a vast array of digital-video content through each card. It promotes limitless learning! To help be part of the original ideas on that set and bring it to production has been really enjoyable for me personally, but it took years of development and scribbling down ideas to get it to this point.

Sounds great. We’re into the home strait now Rory, but if there’s one question you feel we should ask before wrapping it up, what would it be?
Have you enjoyed your time in this industry – and more so since starting Red Knight?

And have you?!
Cheesy as it will sound… 100% yes. I genuinely love what I get to do every day. It comes with its challenges, of course, and the last year in particular has been an interesting one but I’m still that kid that fell in love with Games Workshop and Action Man and Subbuteo… And I get to hang out with people who make all of that magic happen.

You know what? That’s a lovely sentiment, we’re going to thank you sincerely and wrap it up there! Thanks Rory. 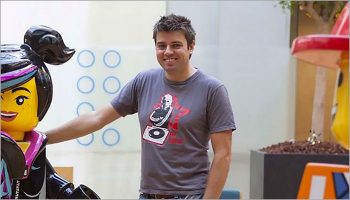 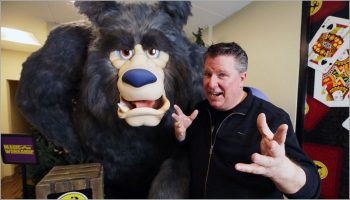 With a past career as an escapologist and illusionist, Jim McCafferty now makes the world a happier place by creating magical toys and games… And terrific entertainment. 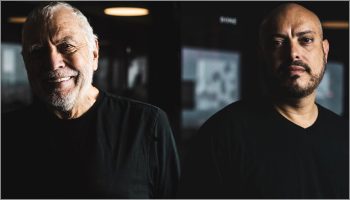 Atari founder Nolan Bushnell, and Zai Ortiz – the designer behind Iron Man’s J.A.R.V.I.S. – on their new game St. Noire and how to be creative

Teaming up with futurist and visionary Zai Ortiz, Atari founder Nolan Bushnell brings us the cutting-edge murder-mystery game, St. Noire. We caught up with the two – well, geniuses – to find out more. 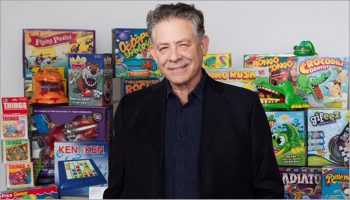 Nextoy founder Robert Fuhrer on defying gravity, proof of concepts and being an I.D.I.O.T.

With creations spanning gaming classics like Crocodile Dentist to the KenKen puzzle brand, we caught up with Nextoy’s Robert Fuhrer to learn more about a glittering career in toys and games.