Elizabeth Hargrave on swerving common board game tropes with Wingspan 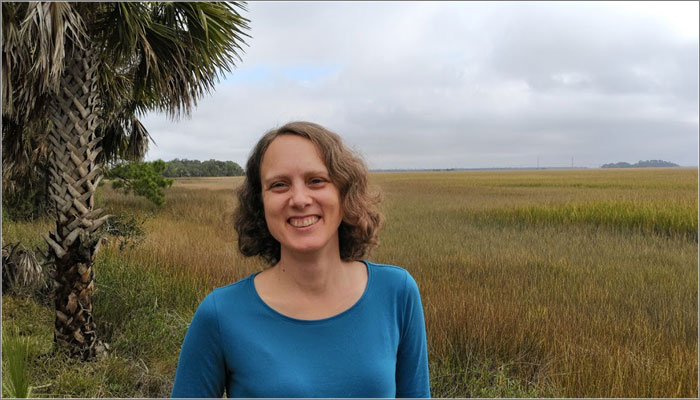 The first big tabletop hit of the year has landed in the form of Wingspan from Stonemaier Games.

The New York Times reports that during the pre-order period in January, more than 5,000 copies of the game sold in a week. Now on its third print run, there are a total of 30,000 games in English, and 14,000 in foreign-language editions.

Wingspan marks the board game debut of designer Elizabeth Hargrave. Diverting from the fantasy/sci-fi themes so prevalent in the tabletop space, Wingspan sees players step into the shoes of bird enthusiasts – researchers, bird watchers, ornithologists, collectors – each seeking to discover and attract the best birds to their network of wildlife preserves.

We caught up with Hargrave to learn more about where the idea for Wingspan came from and what the industry can do to better champion and encourage female game designers. 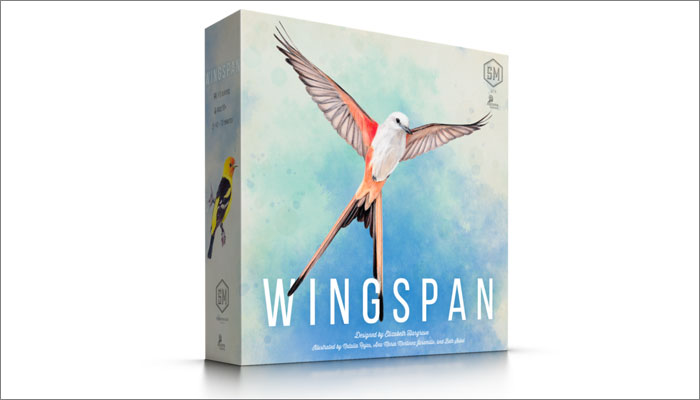 For those who may not have had a chance to play Wingspan yet, what would be your elevator pitch for the game?
It’s an engine-building game with 170 unique bird cards. Each bird that you add to your nature preserve makes its habitat better at gaining you food, cards, or eggs. Most birds also have a special power that gets activated each time you use that habitat, so birds in the same habitat can create nice chains of actions.

Where did the idea come from?
My friends and I were bored with all of the common board game tropes. A lot of the friends that I play games with are also very outdoorsy people. I decided I’d try to make a game about something we were actually interested in.

Wingspan is your first published game. How did you go about getting the idea in-front of a publisher? And what made Stonemaier the perfect partner for the game?
I pitched to three different publishers at GenCon in 2016. I reached out to them ahead of time by email and set up meetings. I really put a lot of research into who might be interested in a game about birds. Mostly I looked for publishers whose line-ups weren’t 100% science fiction and fantasy, which was harder than you might think.

Stonemaier had Viticulture and Between Two Cities, so it seemed like a possibility. When I sat down and Jamey Stegmaier (president at Stonemaier Games) said he remembered reading bird guides for fun as a kid, it seemed even more promising. After the fact, I realized Stonemaier Games really was the perfect partner.

Jamey put a lot of time into developing the gameplay with me and also really cared about finding the right art and components to make it look exceptional. 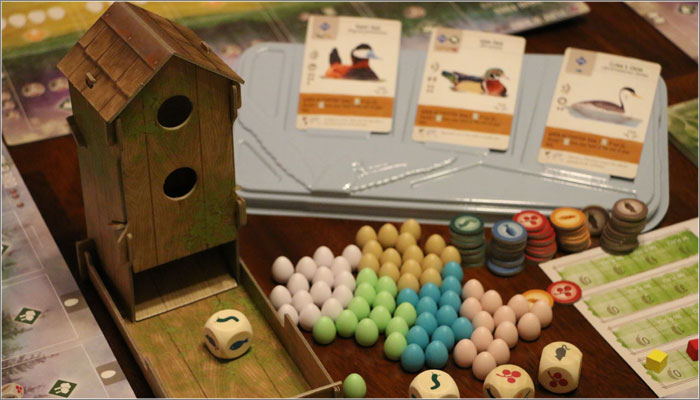 As many have noted, the theme is a bit of breath of fresh air for the tabletop space. Was there ever a worry that you may have to swap birds out for something else to help Wingspan take flight (pun intended)?
Oh I definitely had people say that to me sometimes while when I was playtesting. It’s pretty standard game-design advice that designers should always be willing to re-theme a game. But all of my games are so theme-first, it’s hard to imagine how that would work. There is no Wingspan without the birds. And I think being all-in on the theme makes it an interesting experience even for folks who normally wouldn’t care about birds. 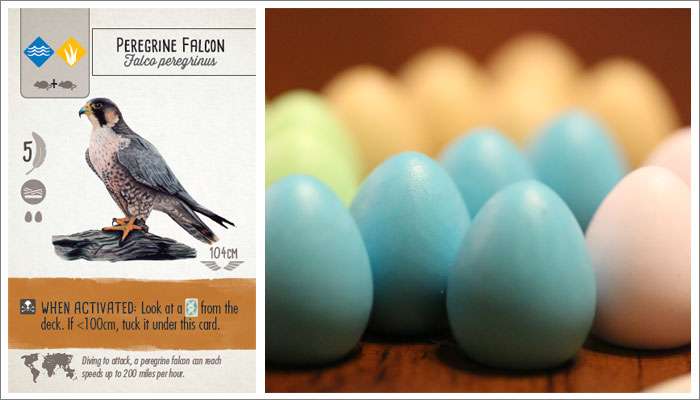 Your Twitter thread on International Women’s Day helped to shine a spotlight on the brilliant work being done by women in the world of game design. Is there anything publishers, organisers of game expos and even us at Mojo Nation should be doing to help get more women into game design and promote the work of female designers?
There are so many ways we can work on this. I’ll point out three:

1. There are lots of women with published games, but they don’t always get the same billing as some of their more well-known male counterparts. Look for them and elevate their work: put them on panels, publish interviews with them, review their games. For co-designing duos, make sure you don’t just talk to the guy on the team. This doesn’t just help the people you’re elevating: it also helps normalize the concept that designers can come from any demographic.

2. One step earlier in the process, a lot of publishers get so many submissions that they close down and say “we’ll only work with folks we know.” I can sympathise, but think about how that perpetuates the status quo. Things will never change if publishers don’t take risks on new designers. Some publishers are now being more conscious about actively soliciting submissions from designers who aren’t white males, and I think it’s making some difference.

3. Even earlier in the process, we all need to support newer designers and help them network so that participating in the industry feels like a viable option to them. If you’ve never had the experience of walking into a room full of people who are visibly unlike you, it’s hard to explain how isolating it can feel. But women and people of colour have to do it over and over again in the board game world, especially in design. I just got back from Unpub, which was maybe 20% women designers this year. A bunch of the women got together for breakfast one morning and several people commented on how much nicer it was to walk into that giant male-dominated convention hall once they felt like they knew the women in the room. Folks are already talking about how to replicate that for other cons we’ll be going to this summer.

All of this also goes for getting more people of colour and other minority voices into the industry, as well. I really believe we’ll see better, more interesting games as the pool of designers gets more diverse.

Looking ahead, what other games can we look forward to playing from you this year?
Next up is Tussie-Mussie, which will be on Kickstarter in May or June from Button Shy. It’s an 18-card game inspired by the Victorian fad of assigning meaning to flowers. Button Shy just put out a teaser on Twitter with some of Beth Sobel’s art and it’s just gorgeous, as we’ve all come to expect.

After that, it’s possible we’ll get out the first Wingspan expansion this year. I’d like to do one for each continent eventually. 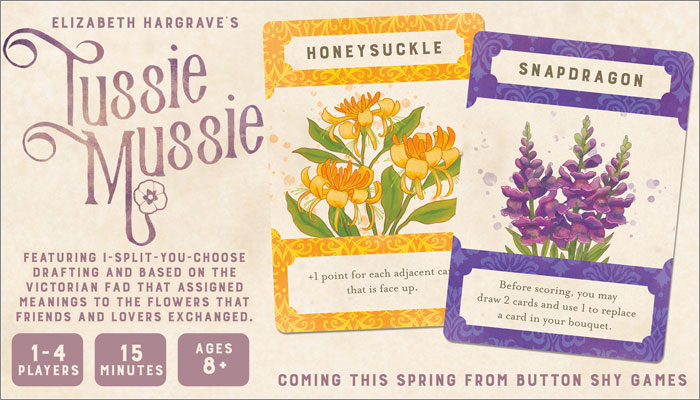 Finally, what do you find helps to spark your creativity when it comes to games design?
I try to take in a lot of information about the world. Podcasts like Radiolab and Curiosity Daily are great for ideas that resonate with me as possible games.

A speechwriter I once worked with started me on a lifelong habit of reading the Washington Post obituary page, because it’s just full of fascinating life stories. In today’s Post there was a guy who was a message-runner at Guernica. I started thinking, what would it look like to have a game be set in wartime, but be about the message-running and not the fighting? A recent obituary for a stuntwoman stuck with me so much that I made a Stuntmeeple prototype and took it to Unpub.

I love making games that engage people with some fascinating little corner of the world that they might not otherwise think about. 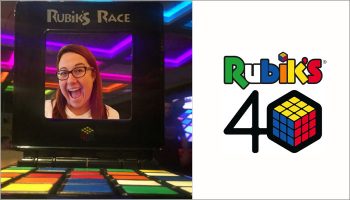 Rubik’s Head of Global Marketing, Hayley Woodward, on the Cube’s appeal – and what all inventors need to know about new ideas

With sales of over 350 million for one product alone, Rubik’s Brand Ltd. have been a major player in the industry for 40 years. We spoke to Head of Global Marketing, Hayley Woodward, to discover why the cube still has appeal, and what all inventors need to know about new ideas.