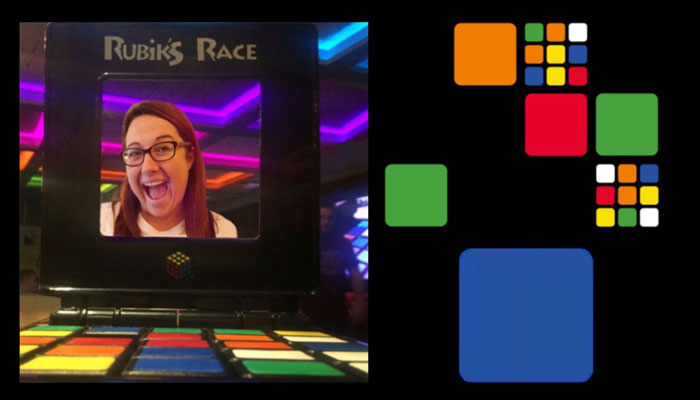 Hayley Woodward! How are you? Seems like ages…
I’m great thank you Deej – time for me has flown! I’m now a proud mummy of two beautiful girls after just returning from maternity leave after nine cuddly months.

Congratulations! And thanks for joining us! We’re doing a series of articles on what must be one of the last games you oversaw at Rubik’s: Rubik’s Capture. In your own words, what’s the aim of the game?
It’s a fun race to find a matching Rubik’s 3×3 pattern on a board from the card in play.

So we take a card from the pack, look at it, then race to find a matching pattern on the board itself?
Exactly. Don’t be fooled, though – its not as easy as you may first think. You need to have an eye for detail – and the speed to place down your grid. Different levels of difficulty really test your brain under the pressure of time and competition. 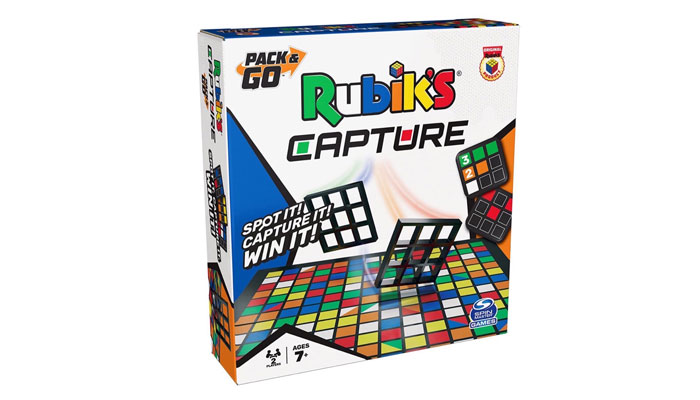 Richard Heayes first pitched this to you at a Rubik’s Design Challenge, organised by Mojo Nation. To the best of your recollection, what information did you include in the brief?
When I write an inventor brief – for any brand – my aim is purely to excite and educate the creator. I want to give a brief that inspires an inventor enough to fuel their individual creativity, and give them an insight into the brand DNA that spurs that WOW idea. I try not to give any restrictions or narrow, too-tight objectives.

Great! And what made the time right for that brief?
We’d seen such a resurgence for the Rubik’s brand, and the Cube itself, that there was so much new news to share! There was a renewed appetite for Rubik’s among a new audience and demographic, and there were new stories to be told, and new product categories to be explored. We’d also had a great game from Matt Burtonwood’s Open 2 Design team the previous year with Mojo…

Oh yes! Rubik’s Cage! That was only the year before?
Right! Yes, that was the previous year, and we were particularly looking for other games to grow that space and complement the offering there. 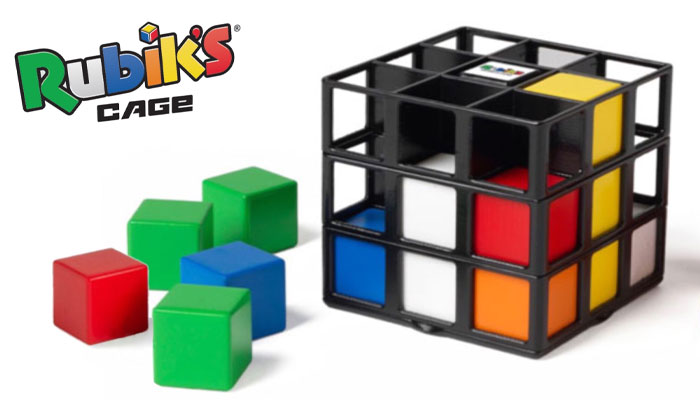 And how important is it, in your view, for inventors to follow a brief? Did you tend to think of them as absolute? Or was there a little flexibility in some of the things you wrote?
Always flexibility! The title of my brief was ‘Think Outside the Cube’, and the pitches I often loved most were the ambitious category ideas rather than just single products. As long as the inventor fully understands the brand DNA, and understands what has and what hasn’t worked before – and why – then no idea is wasted.

Of which… You watched a number of people pitch over the two-day event. What made Rubik’s Capture stand out?
It was immediately recognisable as a Rubik’s game. It was simple to understand from the get go – which is absolutely key. The Rubik’s Cube is so universally understood with no language barriers, everyone understands, with no instructions, what the objective is… So this is a key part of the brand DNA. So with the first two boxes ticked, it was then a no brainer when we played the game and we laughed, cheered and wanted to play again!

It did hit the spot, didn’t it?! So now… Things are probably very different since the Spin Master buyout, but what was the process after Richard and Amanda pitched it to you? To whom did you then speak?
Fortunately with Rubik’s it was a simple process – the next stage was to take the game to some of our master licensees to get reassurance that they too enjoyed the game… And felt it could be included in their portfolio!

And who were these people, typically? Why do they have so much sway?
The like of University Games, John Adams, Ravensburger, and Jumbo. We always had to respect that our licensees and partners knew their customers and consumers best. Even if a game was great, they’d often speak more to the current competition and where any barriers may be from a buyer level. More often than not, if they were keen on a product the only conversations were then around pricing and packaging. 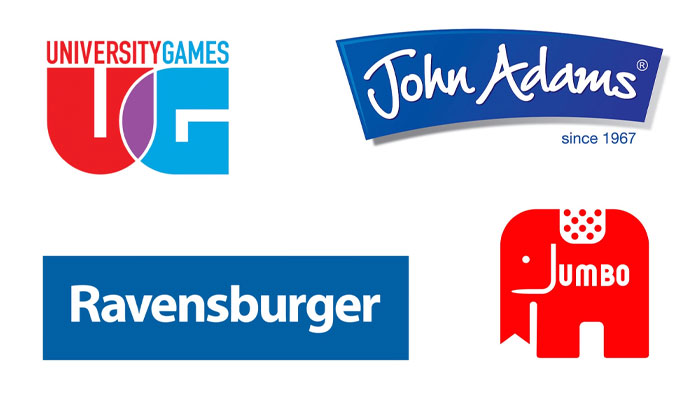 Good answer. And with Rubik’s Capture?
With Rubik’s Capture, we got a unanimous YES… And the estimated forecasts were enough for us to justify the tooling! So the next step was to engineer the product to hit the right suggested retail price, and package it to compliment the game’s range… And hey presto!

So let me ask you this: when the game was going through that process, did you become a champion of the game? Or did you have to remain somewhat dispassionate about it?
Any ideas that were pitched went through myself and two others in the Rubik’s team. If we liked them, we then played them with the wider team… If the appetite was mutual, only then would we take it to our licensees. I’d never show a game that I didn’t champion or truly believe in.

Oh, wow. That’s quite a strong answer. Would it be tough for you to hear a “No” from your licensees, then?
Yes… But if we had a no from a licensee because we couldn’t hit a tooling MOQ, say,  then occasionally I wouldn’t give up hope! I’d take the games to focus groups then re-pitch with evidence. 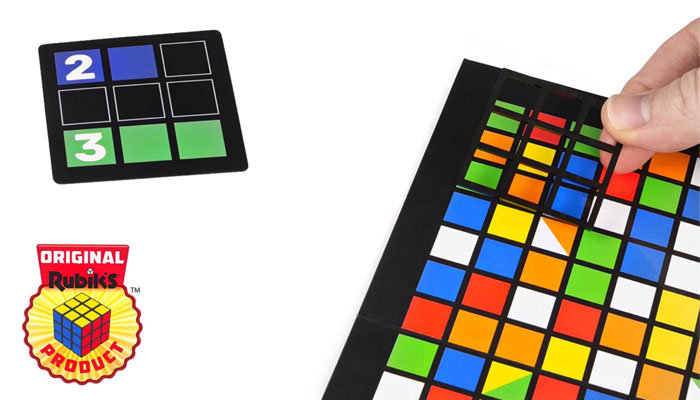 Relating to that, then, how much playtesting did you do? And how did you go about that?
We always play with the inventor, then the next day we would recap what we enjoyed the previous day. Normally, if a game wasn’t remembered, it went to the bottom of the pile. Occasionally a game we thought had potential was because the pitch and enthusiasm was good – but if you remembered the rules and the name the next day, without referring to notes, then we’d feel positively about it.

That’s a great insight! Because you certainly did see great concepts with not-so great pitches.
Yes, we’d see past a wobbly pitch if the game had us hooked for a reason. Also, we’d then play again with different team members and gather more feedback. And actually, I always liked to take things home and playtest with my nieces and nephews, and my game fan brother in law! It’s a big job perk – they love Aunty Hayley the best! This would help me test rules, game plays and play times and be best prepared for any licensee push back or questions.

Which is why you’ve started your own family play testing team, presumably?! So at what point did Rubik’s Capture get a green light?
Very early on – we were lucky enough to have two very successful pitch days and we had a few games that we all liked. Although a great position to be in – we knew we had to make a difficult decision between the games before taking to our licensees as then we’d have some taking one and not another… 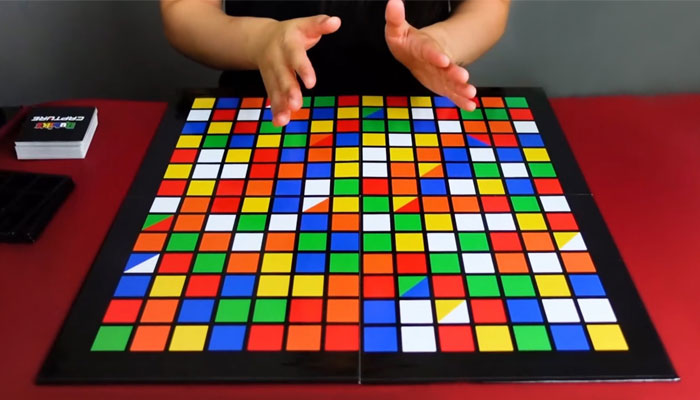 Right! Right… It’s not that you can have one licensee back one game and another back a different one?
No, because that wouldn’t work with tooling costs, etc. Happily, Capture ranked highly and was favoured by all.

Terrific! So, we need to wrap this up Hayley… Let’s get an update! You’re no longer with Rubik’s. What’s next for you?
Well, as you know, Spin Master are now the owners of Rubik’s Cube – they acquired the brand in 2021. But – hot of the press, Deej… I’ve just accepted a position back with Spin as International Marketing Lead for Gund.

Congratulations! That’s terrific! Gund… Gotta Get Gund! Is that the slogan?!
Absolutely!

Excited?
Thrilled! I’m not only thrilled to be back with Spin Master and a fantastic, passionate team, but the Gund brand has such an amazing 124 year heritage… It’ll be a privilege to work on continuing to grow and expand the brand to future generations – and the new products look fantastic.

Brilliant. Hayley, that’s wonderful news – I can’t wait to talk with you again about Gund products! 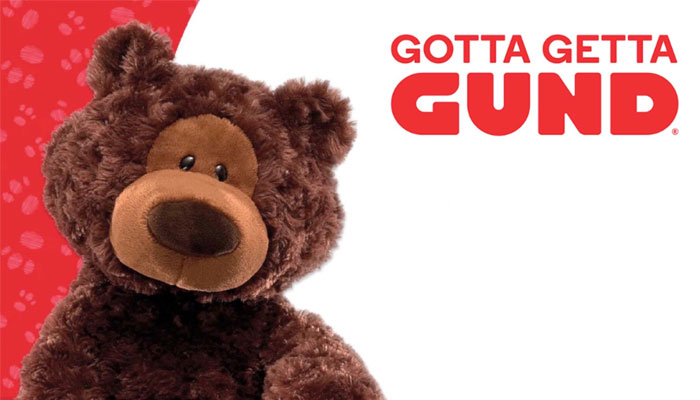