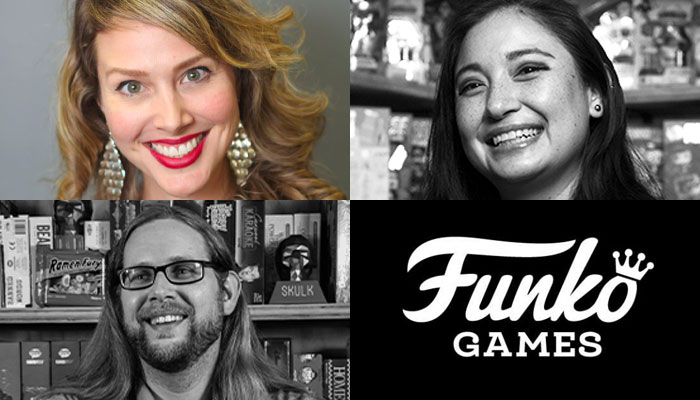 Guys, it’s always great to catch up. Funko Games has just launched a wave of new games based on classic Disney attractions: there’s Haunted Mansion: Call of the Spirits, Big Thunder Mountain Railroad and It’s a Small World. How did you get to grips with these brands? Was there a ‘work trip’ to the Disney parks?
Deirdre Cross, VP, Funko Games: Well Billy, it’ll come as no surprise to hear that our team were already massive fans of the Disney parks and all of these attractions. We are connected to these parks on a very deep, soulful level; we love these places.

For many, many years, we’ve been talking with Disney Consumer Products about how to bring these attractions to the tabletop. When we became Funko Games, we really doubled down on that conversation because they were already working with Funko to launch collectibles based on these attractions. We had an opportunity in early 2020, just before everything shut down, to take a large portion of the team to Disneyland. We had a little field trip! 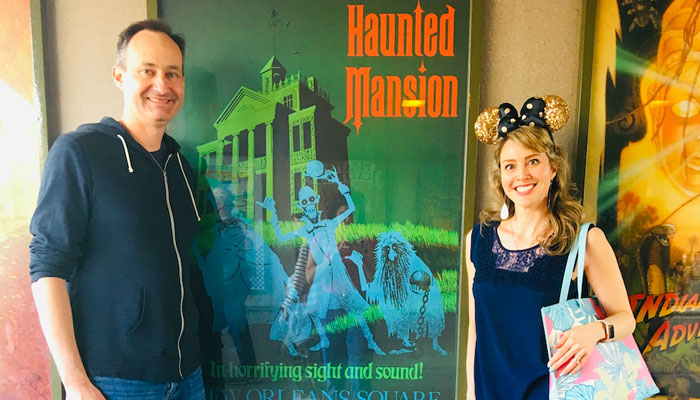 We went on all of the attractions that we were interested in making games for, but to be honest, we all know the rides really well anyway! It feels like there’s always at least one person from our studio at Walt Disney World. Matt, you’re actually going later on today, right?

Let’s dive into the range. There’s plenty of strings you could pull at for It’s a Small World, so what helped shape that game?
Nicole Jekich, Producer & Game Developer, Funko Games: It was a big project in the sense that so many people are familiar with this attraction, and it’s been around for so long. I’ve been on it plenty of times in the past! 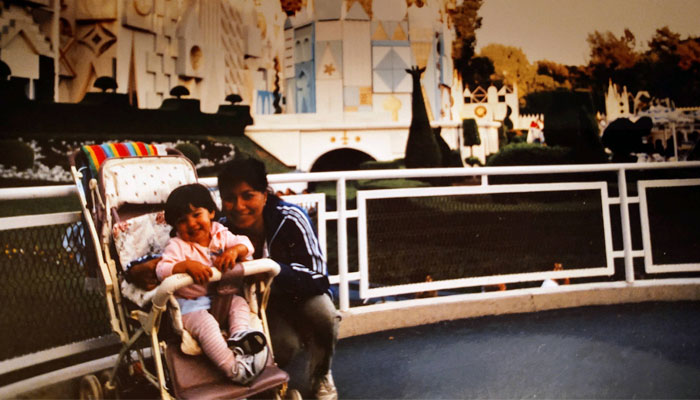 Yes, we have a lovely shot of you as a kid there!
Yes! That’s me! When you go on the ride, it’s very calming and happy, so it was important for us to replicate that atmosphere in the game. In fact, that’s something I really remember about going on the ride as a kid – my grandma could go on it… It really was an attraction we could all enjoy together, and we wanted that to also be the case with the game. 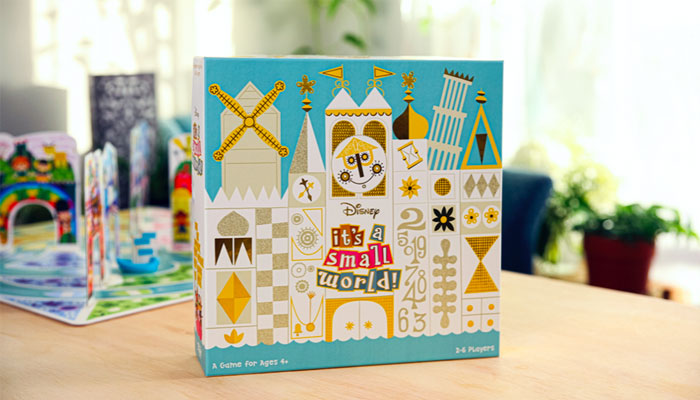 Knowing that we wanted something calming that families could play together, we opted to create a game that had great table presence and accessible gameplay. The 3D structure really immerses players in the ride and the gameplay is centred around seeing and recognising different aspects of the attraction, like the children and the animals. 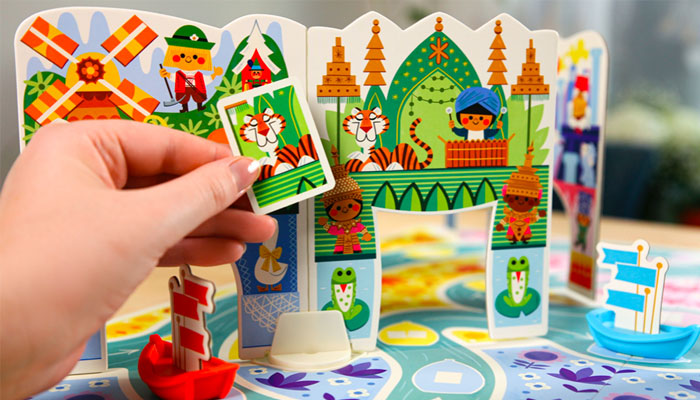 Our team did a great job bringing the iconic elements – the boats, the clocktower – to life; there’s lots of detail and depth, while still being a very accessible game. It was important that the representation of the ride was in the game, but also the happiness and colourfulness too.

DC: That idea of how you feel when you’re on the ride came up a lot, which led to the question: How competitive should this game be? Should it be competitive at all?! In the rules, we even added a section ‘for an even gentler game…’ that includes modifications to make the game even lighter and more accessible than it already is. 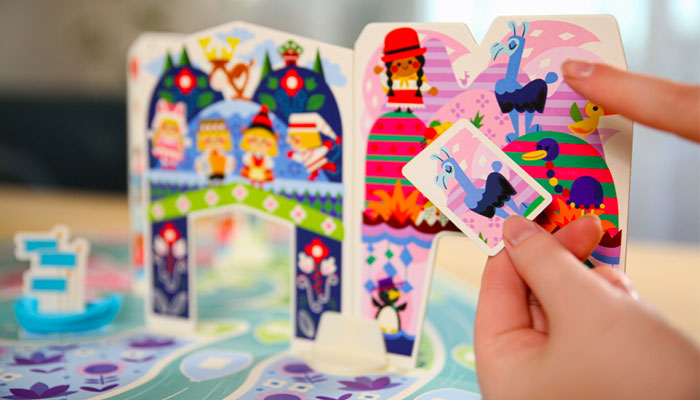 It does capture the vibe of the ride brilliantly. Moving onto a slightly less gentle attraction – Big Thunder Mountain Railroad. The game has rolling marbles, deckbuilding and an impressive recreation of the mountain itself. Talk us through the development process.
MC: Well, the name alone – Big Thunder Mountain Railroad! The mountain had to be there as the centrepiece of the game. That was the first step – we’ve got the mountain, now let’s build a game around the mountain. 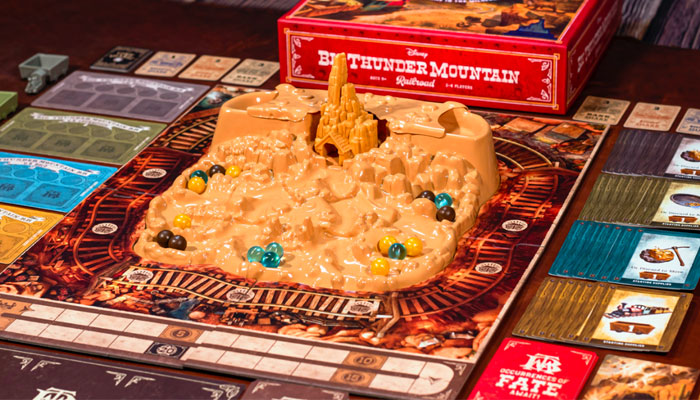 The game is based on the ride in Magic Kingdom, Florida. It’s heavily inspired by Monument Valley, so we drew inspiration from that and the history around that. We wanted to tell the story of this cursed flooded town at the base of the mountain, as players take on the role of miners looking for gold.

As you move around, there’s dynamite, earthquakes, dinosaur bones, and that’s all in here. In fact, if you put your ear up close, as the marbles roll down the mountain, it does sound like a train!

Sold! The marbles roll down the sculpted mountain and randomly land at different parts of the board. How tricky was it to get that element right?
MC: We worked with our production team and our 3D designers to make the mountain, and it went through tonnes of iterations to make sure it slopes correctly. It was the biggest testing point of this game – we had to make it random, but seamless. It was a mountain of a task! 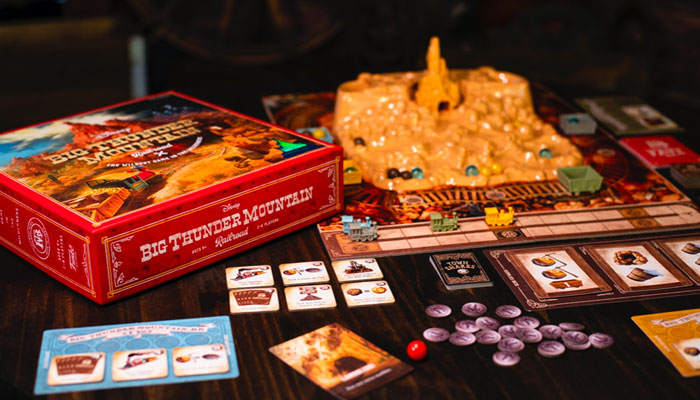 Love a pun, Matt! I have to say, one side-effect of playing these games is that they help you appreciate the craft that’s gone into the original attractions, because there are so many nods to specific details here…
DC: Well, the attractions are stories in themselves. The Imagineers are exhaustive in their work. With Big Thunder Mountain Railroad, there’s a backstory about what happened to this town and the miners. We have a little bit of that story in our instructions, to connect people to it who might not know that story. It’s also a nice wink and a nod to those who do know the lore. The game references mining magnate Barnabas T. Bullion. He has a whole backstory!

Let’s move onto Haunted Mansion: Call of the Spirits. Haunted Mansion is an iconic attraction – what made it ripe for a board game adaptation?
DC: Well, Haunted Mansion: Call of the Spirits, It’s a Small World and Big Thunder Mountain Railroad are all original stories – these attractions aren’t based on a film or TV show. We love those too, and some of our games are inspired by those kinds of attractions – like our Mad Tea Party game – but we like to focus on these big, charismatic standalone stories that are unique to the Disney parks. 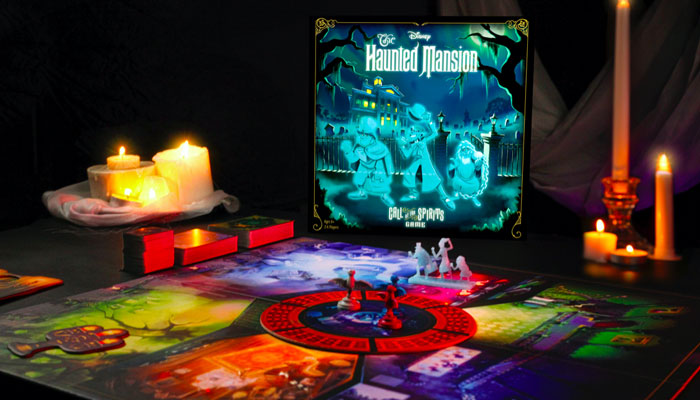 We also have a game coming out this year called Happiest Day, centred around having the happiest day at the Magic Kingdom Park. You can explore the park and go to the Mad Tea Party or Mr Toad’s Wild Ride, or anywhere on that magical map.

Amazing. Before I let you guys go, since we last spoke you launched the Rear Window board game. It happens to be one my favourite films, so a few quick questions on that! For some, this will seem like quite a left field move to bring that movie into board games. Talk us through the thought process behind it.
MC: Our design team – Prospero Hall – likes to do things out of the ordinary. This is a property that’s dear to a lot of people’s hearts, so it was a good opportunity to create a love letter to the movie in the form of a game. I’m also a huge fan of Rear Window, and of Hitchcock in general, so I was really excited to get to work on this. 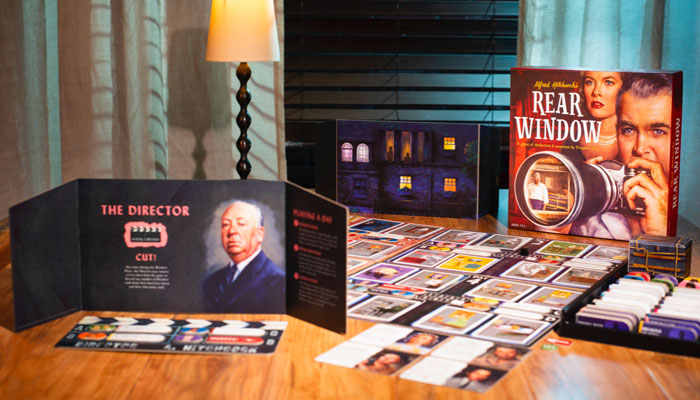 The game is all about how players interpret the goings on in each apartment, with one player crafting clues as the Director. Why go in this direction, as opposed to a more ‘obvious’ mystery game format?
MC: We didn’t want to go in an obvious direction, but when you play it, it still feels very Rear Window. We wanted to inject as much mystery in the game, and interactive too. A lot of detective games are quite solitary experiences, but we wanted to have a very collaborative, talkative atmosphere.

There’s also the wrinkle that you don’t actually know if there’s been a murder or not. That gives the game a suspense element, as it throws up the question of whether the Director is working with me or against me.

Absolutely. Guys, a huge thanks again for taking the time – and congrats again on the launch of your Disney games.