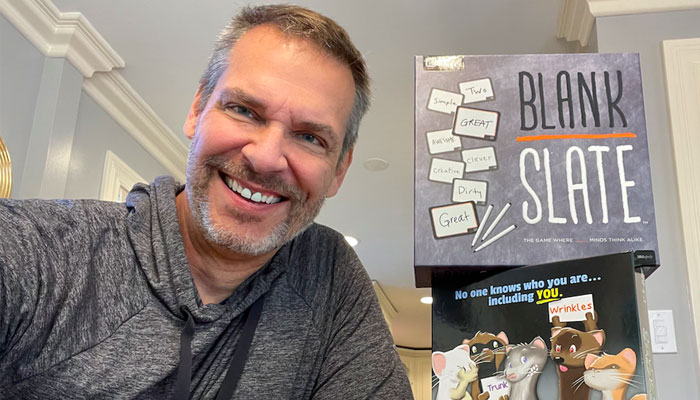 Bob, it’s great to catch up. To kick things off, have you always been a board game fan?
As a child I recall playing a lot of card games, and even trying to invent some new ones, but I didn’t design any games officially until well into my adult life.

You’re the inventor of USAopoly’s popular party game, Blank Slate. The game sees players ‘fill-the-blank’ of prompt cards like ‘HAPPY ______’. You score points by matching answers with other players… BUT, the twist being that if you match with several players you score one point, but if you match with just one other player, you score three points. So it pays to not be too obvious with your answers! Where did the seed of this idea come from?
Our language is full of compound terms and phrases built largely from root words. I went through the dictionary, page by page, to see if there were enough compound terms to make a game and which worked best.

The dictionary helps only for words that come after, such as ‘POT luck’ and ‘POT roast’. To find words before the root word, well, that came down to good old-fashioned thinking: ‘crock POT’, ‘crack POT’, ‘jack POT’ and so on.

‘Hot POT’ – sold!
Good one! Awarding points for answers that match as opposed to unique answers authenticates the answers that score – an answer is obviously legit if two players have it. And there’s magic in that “Ah-ha!” moment when you discover you match someone else… It’s equal parts surprise and joy. That spark of fun is both connective and kinetic. 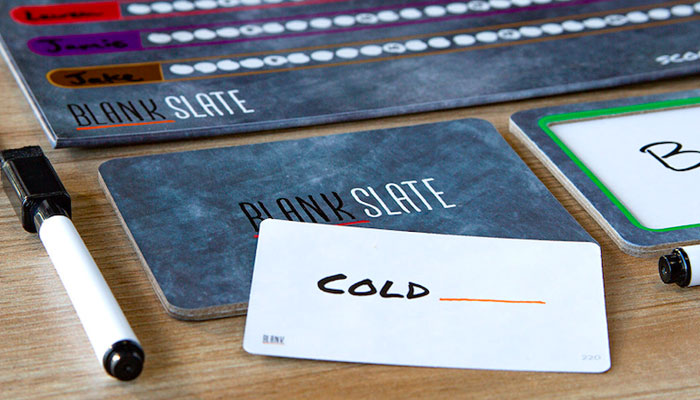 Smart. Now, looking at some of your word prompt cards ­­– ‘MIXED ____’, ‘PENNY_____’, COLD____’ – how did you approach writing these?
I chose the root word prompts with the idea that finding an answer shouldn’t be difficult, but the trick is in choosing the right one. Some prompts have just a few answers, like ‘___SKATE’, while others have many, like ‘FIRE___’.

The game is part Rorschach test – what is the first thing that comes to mind? – and trivia –what else can you think of? Finally, your answer is further refined by your frame of mind at that moment and the identity of the other players.

An interesting part of the game is that answers can be regional. ‘GOOD___’ is likely to yield responses of ‘GOOD day’ in Australia, but ‘GOOD bye’ would be the more popular answer in the US.

Answers can be generational as well. For my parents, ‘SOCIAL___’ is most likely ‘SOCIAL security’, while I might be more inclined to think ‘SOCIAL work’ or ‘SOCIAL justice’. My kids would be thinking ‘SOCIAL media.’ The game launched in 2018, so my original working list of answers certainly did not include ‘SOCIAL distancing’. 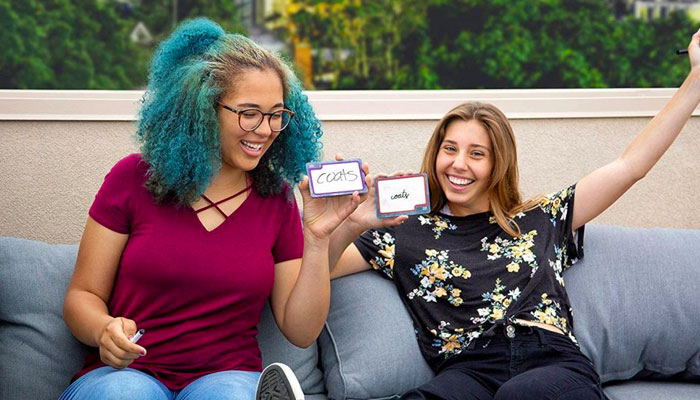 That was going to be my answer as it happens! What made The Op a great fit for the game?
The truth is The Op was the only company I pitched it to. I knew Tony Serebriany and he was kind enough to invite the prototype without imposing any hoops to jump through.

How do you like to pitch ideas? Is there a knack to it?
I prefer to pitch face-to-face because I bring enthusiasm and hopefully spark interest better than a sell sheet can.

Do you find yourself drawn to designing certain kinds of games?
My interests in game design run toward card games and party games. I am a fan of designs that are simple, fast, and don’t run longer than 20 to 30 minutes.

Simple and speedy – are they must-haves when it comes to good party games?
Yes. A great party game has an easy get, is simple, has limitless re-playability and allows players to bring creativity – all while fostering joy and connection in the process.

Do you have a process when it comes to game ideation?
I don’t have a process. I find that the more thinking I do, the more ideas come to the surface. The trick is to find time for solitude. And then to weed out the ideas that won’t work ­­– which is, of course, most of them. Ideas and inspiration can come from anywhere; the key is to pay attention.

Bob, this has been great. Before I let you go, you have a brand-new game out in the form of Ferret Out from R&R Games. Tell us a bit about it…
Everyone – the Ferrets – has the same secret word except one player ­– the Weasel ­– who has a different word, but no one knows whether they are a Ferret or a Weasel. Each player writes a one-word clue about their word, and then everyone guesses who the Weasel is. Points are awarded for correctly guessing the Weasel, but the Weasel can score the most points if they’re able to steal the Ferrets’ word.

For example, in a recent game, the Ferrets had the word ‘TOWER’ and the Weasel had the word ‘SUIT’. Two clues were ‘Sears’ and ‘Doorman’. The Weasel explained he thought he was a Ferret because a doorman wears a suit, and you buy a suit at Sears. 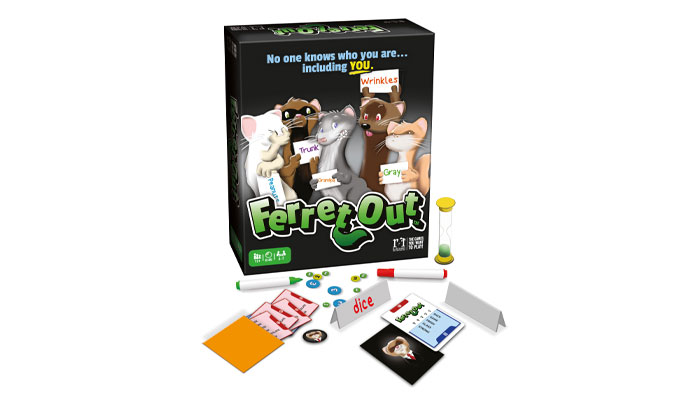 Nice! The not knowing whether you’re a Ferret or a Weasel is a nice twist for this kind of ‘hidden role’ game.
Yes, it means you need to give a good clue without giving a great one, lest the Weasel steals the Ferrets’ word. It means we all get to enjoy clever clue-giving and creative puzzle-solving at the same time and on every turn.

The game has a nice learning curve: as the Ferrets push clues further into the weeds, that makes it easier for the Weasel to blend in undetected. The fun is fuelled by the secret words: they have lots of modifiers, so there’s plenty of room for clever hints and wrong conclusions. Frequently, hints unwittingly relate to both words, making this a satisfying challenge. It’s as think-y as it is fun.

Sounds like another winner. Hope it does well Bob, and thanks again for taking time out to chat.