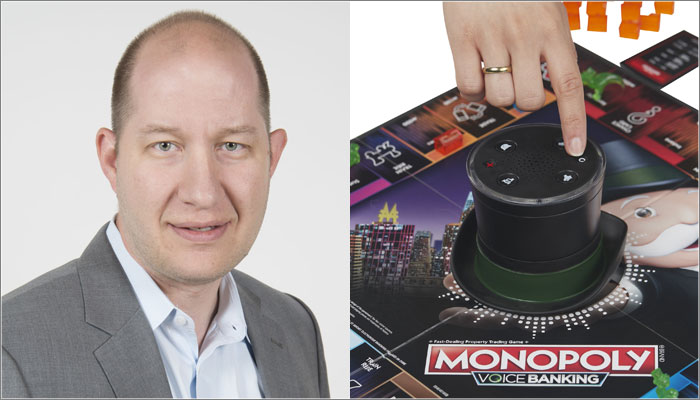 Voice tech is heading to the world of Monopoly in the new Monopoly Voice Banking.

There’s no physical cash or bank cards in this version of the game; instead, money is monitored and managed by the voice-controlled Mr Monopoly banking unit. Players can push a button on the device, say commands like “Pay Rent on Marvin Gardens” or “Buy St James Place” and Mr. Monopoly will handle the transactions.

With the game landing in the UK next week, we caught up with Brian Wilk, VP of Product Development at Hasbro, to learn more about what went into bringing voice tech to the firm’s most iconic game. 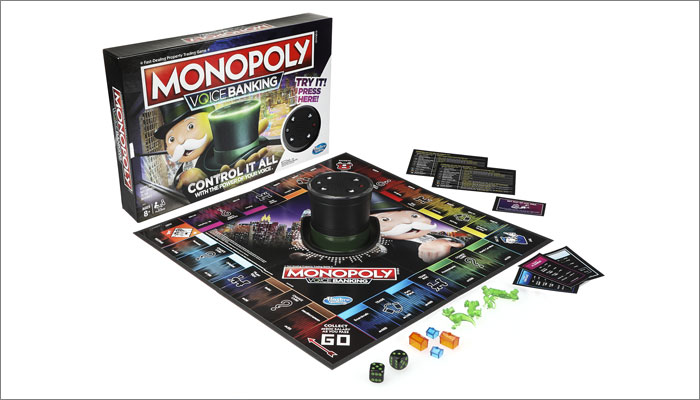 The game is suitable for up to four players, who each choose a button, the T-Rex, cat, dog, or race car, and get a command card. Each takes it in turn to press their character button, wait for the top hat to light up, and say one of the commands that are on the reference cards. Mr. Monopoly keeps tabs on the players’ money and properties throughout the game, so there is no cash to think about!

The game is launching globally, and will be available in UK retailers beginning in July.

Where did the idea come from that Voice could be a great tech to introduce to the world of Monopoly?
Voice activated and voice recognition products are now part of our everyday lives, and we wanted to bring this ever-growing trend to Monopoly and bring fans a whole new gaming experience.

This new game also gives players the opportunity to get to know Mr. Monopoly’s personality for the first time, he’s both competitive and comical and his real-estate expertise make him a great banker!

What were the main challenges in integrating this tech into the game?
We needed to ensure that whilst incorporating tech into the game, we still kept the game play familiar and enjoyable for Monopoly’s passionate fans. We know that Monopoly is flexible and lends itself well to adaptations, and while we’ve removed the cash from the game and made the board with less spaces, the favourite iconic Monopoly elements such as purchasing Properties and passing Go remain key components of the game.

Adding more tech to the game play means there will be additional set up for players, but we’ve endeavoured to make it easy by designing Mr. Monopoly himself to be as helpful possible. Players are given a list of commands when they begin the game, along with tips for using the unit, which include choosing a quiet place to play, speaking clearly and using the names and words as they appear on the board.

We recognise that people may not always stick to the script and have made sure to account for this with some special surprises, to make the game play even more fun!

Are you looking at introducing voice into other classic Hasbro Gaming brands?
We are always on the lookout for new trends to incorporate into our products, and will continue to do so into 2020. I can’t give anything away about our upcoming games, however I can say that fans should be excited!