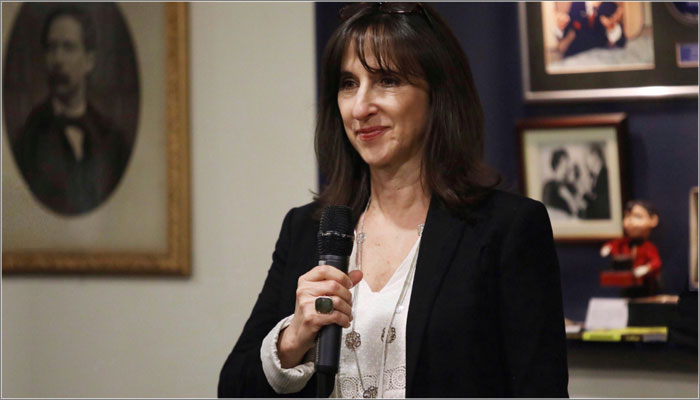 With sales of over 10 million units, a legion of loyal fans and a number of spin-off games available, Bananagrams is a phenomenon.

We asked Deej Johnson – author of The Little Book of Bananagrams – to catch up with the game’s co-inventor Rena Nathanson, and discover the secret of its appeal… 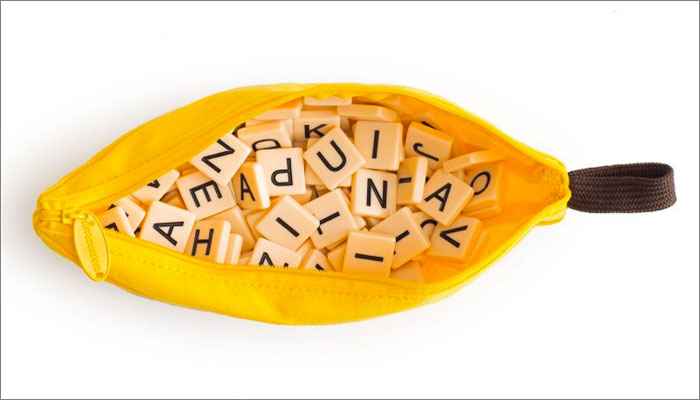 Before we get to Bananagrams, Rena, what were your favourite toys and games growing up?
I actually preferred to make things rather than play with toys. I had a five-tier bookshelf that I kitted out as a miniature townhouse, complete with miniature magazines and art – all painstakingly cut out and assembled from my parents’ magazines! I even made couches and beds! I have to say, it kept me occupied for years. I didn’t ever ‘play’ with it – I just made things for it. I still collect miniatures to this day!

All these years and I didn’t know that! That’s great. And you mention your parents: I didn’t meet your dad, Abe, but from the stories you tell, his sense of humour was offbeat… What was his business motto?
Oh, he was the funniest human being I’ve ever known. Growing up, he had a graphic-design company and the motto was, “We charge less because our work is inferior.”

I’d actually slightly misremembered that motto, but that’s even better! Did people get that it was a joke?
Sometimes they got it – sometimes they didn’t! He was very creative and playful, always making, building, painting, laughing.

So if you got the joke and joined in, great… But he was happy just playing?
Yes, he’d joke about on his own… He always laughed hardest at his own jokes!
When he used to get dressed, he’d check how he looked in a full-length mirror – it was a giant funhouse mirror from a funfair!

The kind that distorts how you look?
Totally! That was my dad. It was hilarious! You’d have loved him, and he you.

Awww. Thanks, Rena. Sincerely. He does sound like a kindred spirit. It mostly goes without saying: this sense of humour is key to Bananagrams… How did the game come about?
As well as being very funny – very witty, very quick – he loved wordplay. So we’d often play word games as a family. And it wasn’t unusual, but we were playing Scrabble with him – this is me, and my two kids – Aaron, he was ten at the time, and Ava; she was seven. Anyway, we were playing Scrabble… 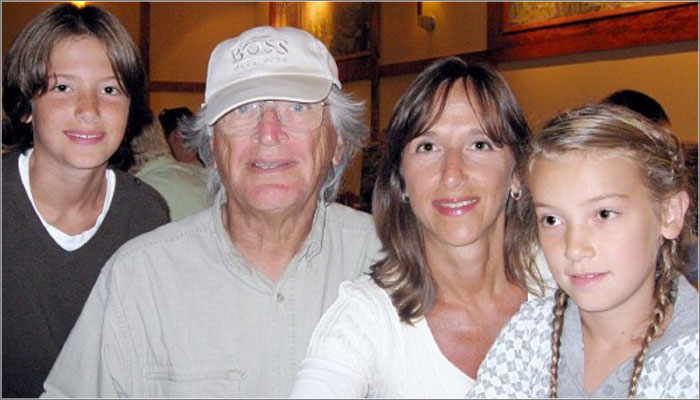 Which is a great game, lest anyone think we’re about to slag it off…
Yes, Scrabble is a great game. And, no, this isn’t a criticism – but the kids were young and it was taking a while because we’re all different ages and levels, with triple scoring and adding the points, you know?

For sure. A seven-year old doesn’t play Scrabble the same way as her mum and grandad!
Right. And at some point we became a bit frustrated, and started wondering if we could make a word game that lets us all play on the same level and not take hours. So we start saying: “What if there’s no board? What if it’s a race? What if you don’t have to keep score?”

A lot of “What If” questions?!
Yeah – but we’re not thinking of that like you do, in a ‘techniquey’ way…

No; I hear that – it’s organic!
Right. Just “What if this and what if that…” We started trying out different letter combinations with family and friends and eventually we had this game. We didn’t think of it as a game to sell – we just liked playing it and other people seemed to like it.

With you, Aaron and Ava living in the U.K. while your dad’s in Rhode Island?
I was back and forth but yes, mainly U.K. as the kids were in school – and we were both testing this game out with people. Then something fortuitous happened… My dad says, “You’ve gotta play this anagram game! It drives people bananas!” And we kind of connected the dots: bananas plus anagrams… BANANAGRAMS! 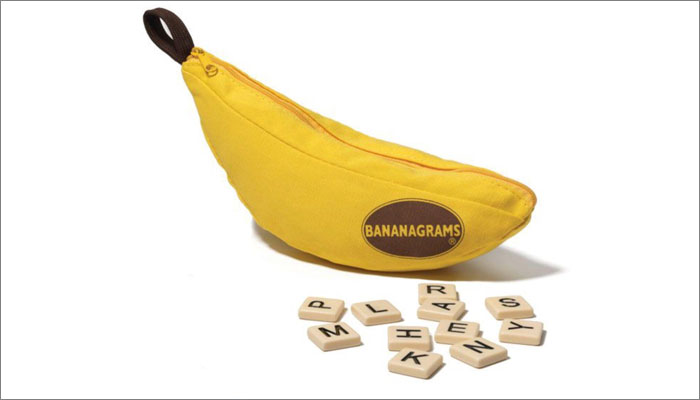 Doesn’t work with an English accent, but fortuitous, as you say. Or genius!
It’s fortuitous; we didn’t sit down and think it up!

No, but Abe said it and someone picked up on it! So one might argue there’s a stroke of genius there because the name and the pouch are what pull it together. Of which, where does the pouch come into it?
Well, the silliness of bananas just kinda matched the silliness of the game. So by now we were thinking we might be on to something, and the rules and the language fell into place… And my mother suggested putting it in a banana-shaped pouch. Now, oddly enough, my dad didn’t really like that idea…

He didn’t like the pouch?
No, not at first. We talked about it; it was hard to picture. But my mum and I  made a pouch out of paper just to show what it might look like, and that looked pretty good. So then my mum made one out of cloth, and that became a thing…

Are you selling them at this point?
No, we were giving them to people; friends, family. But I was curious about whether they’d sell. We made 50. I even ironed on the logo to each and every one of the pouches! I arranged for a toy shop in Rhode Island to stock a few just to see if the there was anything in it. And I also brought some back with me and tried them at a local toy store in London. Well, they flew off the shelves! We couldn’t believe it. So, we had more made and the sell-out trend continued. We started to get excited and thought, “Hmmmmm… We may really be on to something.”

I love this story! You’re right up behind a phenomenon, but you don’t know it! So just to be clear: although you didn’t couch it in these terms, you’ve had different iterations of the game, you’ve had prototypes, and you’ve playtested the arse off it! Then, in 2006, you take a stand at London Toy Fair. Did the pouch help with retailers or hinder? How many units did you have?
How many units? 500 or so! We were very, very lucky. We got a lot of interest straight away. That may be because we were the noisiest, most raucous stand at the fair! There was some pushback from the larger retailers on the pouch because they said, “We can’t stack these on a shelf: they need a box”

But not from the independents?
No; we took orders from many independent retailers – which continue to be the life blood of Bananagrams – and we could fulfil them. I didn’t want to turn up at the show, take orders and not be able to deliver immediately… I’m an instant satisfaction sort of person, so I presume everyone else is too! So, we took orders, and delivered, and it was popular pretty much immediately. Over the next couple of years, some of the retailers that’d said no because of the pouch and lack of box started to place orders – and that was it! We were running a games company.

And you still are! Your business card says ‘Top Banana’; you’re the CEO. The game’s played all over the world, there are several variations… On top of that Ellen DeGeneres is a fan, the cast of Downton Abbey are fans, Dame Judi Dench is a fan… What’s the secret of its appeal, do you think?
I think there are a few things – the fact that it can be played quite quickly, without a massive 1-2 hour commitment is key. Saying that, people DO end up playing for hours on end – but because it’s addictive, not because it takes that long to play a single game. Another reason is that all ages can play on an equal playing field. You don’t need long words or a big vocabulary to win. 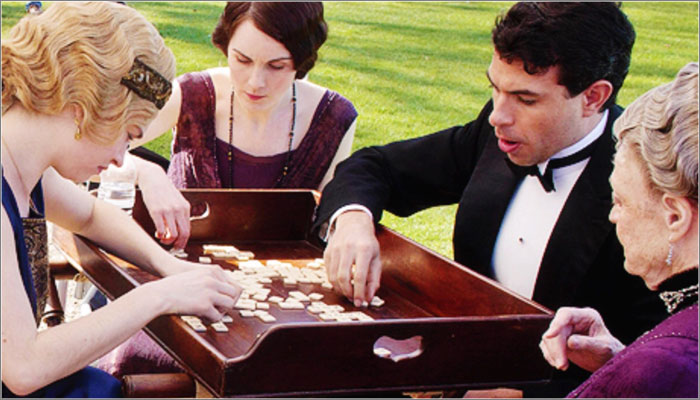 You’re absolutely right! Adults can play it with a fantastic vocabulary – dare I say a grandiloquent one?! But a child can come along with their fast-track minds and nimble-little fingers, and there’s your winner!
Absolutely. It’s speed and lateral thinking. Which leads me to the third thing – the fluidity. You can move your letters around continually, so you’re never boxed in or stuck. That makes it much more approachable and user friendly.

Your dad passed in 2010. Did he see much of the game’s success?
Yeah. Thanks for bringing that up! He was 80, but yes – he saw it succeed; he saw it flourish. Gratefully, we were all together at New York Toy Fair when the game won Toy of the Year in 2009. That was a fantastic honour – and night! He saw a couple of other games to fruition as well, and was just thrilled! It’s unbelievable, really. We’ve been on an amazing adventure, and I love that the game brings people so much joy. 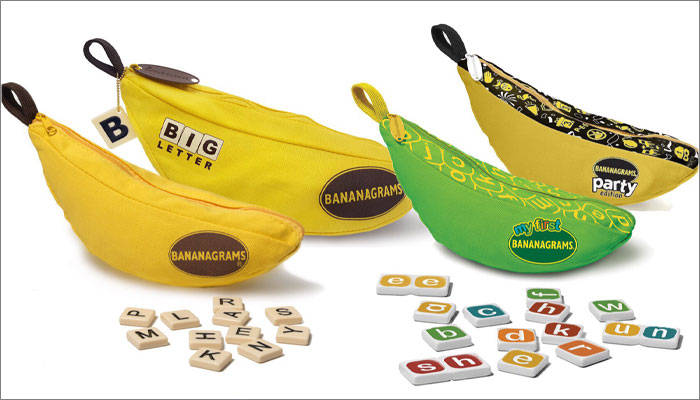 And with some of the other games, what is it that you look for when someone pitches an idea to you? What are you hoping to see?
Primarily, we look for novel game mechanics and playability. Secondly, if a game is further along in its development, we look for unique packaging. We pride ourselves on our “not in a square box” box!

Is there anything that makes an idea an absolute “No”?
An absolute “no” for us is too-complex gameplay. We’re aware that we’re a “casual” game company. There are many terrific true ‘Gamer’ companies out there, so we leave the intense-strategy approach to the experts!

Last two questions: first, if you were writing an autobiography, what would you call it?
Nobody’s Perfect.

And finally, what’s the most interesting thing on your desk?
Hmmm. I could get myself into trouble here… So I take the fifth!

Take the fifth?! In England?! Tell you what, take the fifth but next time you launch a game, we’ll do this again. You can plant something cool on there! 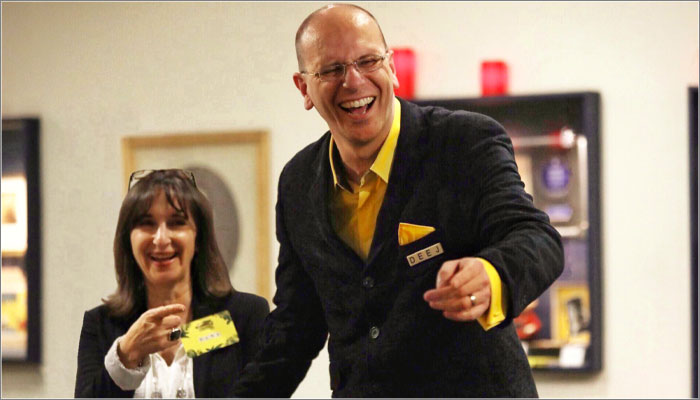