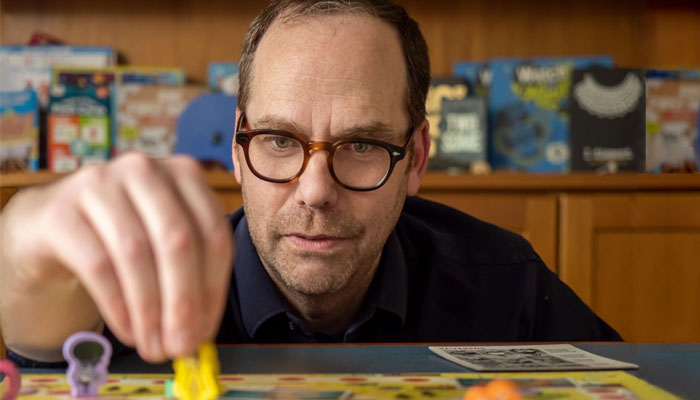 John, how’s it all going?
It’s all been going incredibly well, thank you! There’s been a hurricane of momentum brewing here in Buffalo, NY! So excited to share our new games that are launching soon… It’s a complete blast to see people unboxing and digging in and connecting with one another.

You’ve spoken about connections before. That the important thing, presumably?
Absolutely. When it comes to play it’s all about connecting with each other. Especially when everything’s been so upside-down and isolating over the past few years. It’s no secret that board games and puzzles have been having a renaissance, but it’s also that people are looking for innovative play where they can connect with one another. It’s one thing we’re all craving, and it’s what people bring to the game that creates those experiences and memories that live beyond the table.

Well, that leads neatly into talking about another one of your licensed products, a Tetris board game. How would you describe it?
It’s Tetris! I mean… come on! What a wonderful and iconic game and brand. Everyone knows what the game is – everyone’s experienced it on some level. Our goal was to bring it to life in a tabletop format, but in a multiplayer way so you can plug into multiple other players during the game since the original Tetris is inherently a solo game. 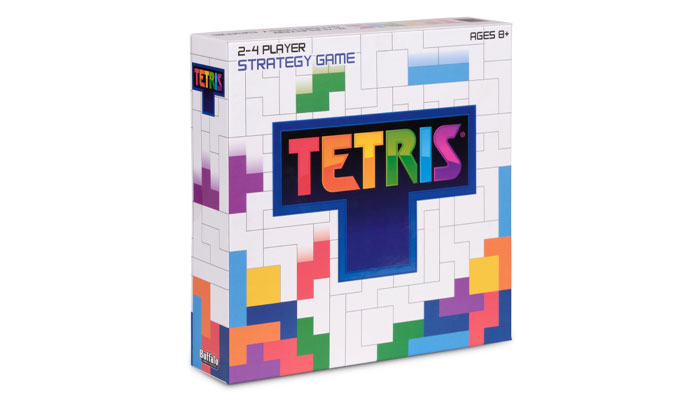 So, you wanted to create a new version for players to connect through?
Exactly. Our goal was to create an experience that more than two players cold enjoy. We wanted to do that while capturing the spirit of the original – preserving that satisfaction of dropping pieces into a matrix tower. Every game has its own story, where you’re a main character. Like any story, the character makes choices to further the story. Those choices become the strategy in your game. And we really wanted to capture that… We wanted to have those moments where you see and hear those pieces drop and click into place, and you feel, “Yes! I got it!” Or – a couple of moves later – “Oh… I shouldn’t’ve put that there!” The drama of the peaks and valleys of play.

And with whom were you working, mainly? Who’s the designer?
Mr. Phil Walker-Harding. Amazingly talented and just oozing with creativity. Phil is a master at creating accessible gameplay, and understands the differences in the various markets – especially what was needed for a mass market game. I love, love, love teaming up with Phil. He was perfect for this game.

High praise! It’s a mass-market game then?
100%. Anyone can play Tetris, especially families, and this game should encompass its core audience, but also have a reach beyond that. It maintains the spirit of the original play but adds a few little extra wrinkles to make it unique in its own right while fitting the tabletop medium. 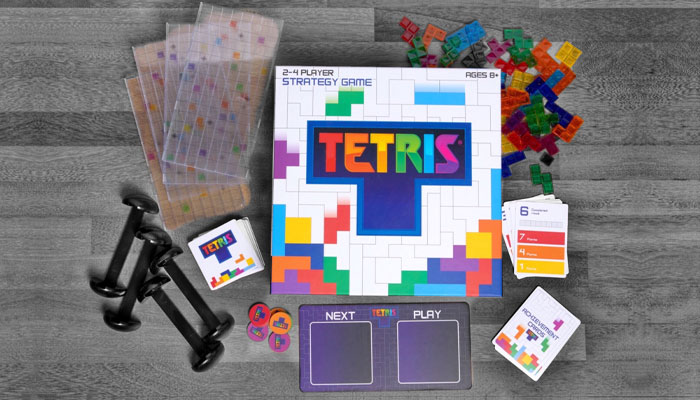 Fantastic! You mention Phil Walker-Harding’s work. For what other games is he known?
People should know him for Sushi Go. Other gamers may know his work from Imhotep – a personal favourite. And, last year, we did a game together called Summer Camp… That captures the nostalgic notion of summers gone by and the spirit of the great outdoors in a family game. There, we wanted to bring deck building to the mass market and this proved to be a great vehicle. I think he hit the bullseye in that case; it’s something parents can play with their kids, but it still has a little bit of weight to it.

Phil Walker-Harding; I’ve never interviewed him…
You absolutely should! I jokingly called him ‘Professor’ because his deep knowledge of the industry. He is a top-notch designer, and amazing ambassador to our industry. 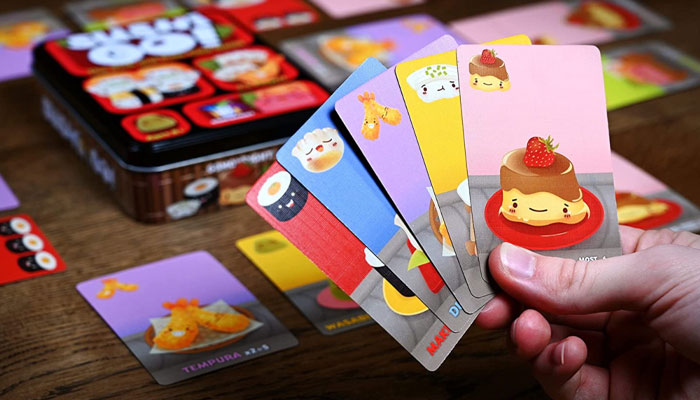 Tell me a little bit about the design process on this…
Any game begins with realising what the opportunity or proposition is for the theme. What kind of experience should the players feel? Who is this game for? Where is the innovation? Like writing a screenplay, we begin with the blank page, and find that overarching direction. Then, it’s a very iterative process to prove out the best ideas and getting things up on their feet.

How collaborative is it, then?
Completely. It’s SUCH a collaborative process, and it’s crucial to have your own community of people where everyone brings something unique to the table. A great idea is a great idea, regardless of how big or small it is. It can come from anywhere. My two favourite words are, “What if…” Those wrinkles… Those details, make all the difference.

You’re very passionate about this…
We’re so fortunate to do what we do. We get to play. Literally. In doing so, we’re bringing something to life that hasn’t existed before and that others will enjoy. We’re storytellers creating and shaping experiences. We work hard to hear those three magic words, “Let’s play again.” That’s really our mantra, whether it’s a strategy game, whether it’s a silly dexterity game, a preschool activity… Anything. We want to make sure the game can stand up on its own and that the audience is enjoying it. 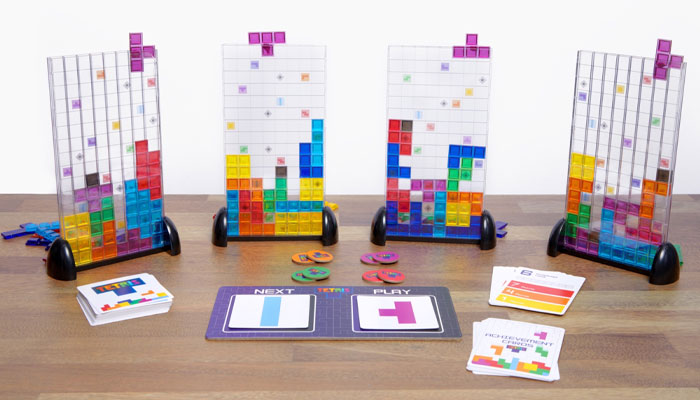 Tetris isn’t your only licensed game. What other licenses come to mind as interesting games to have worked on?
Easy. The Golden Ticket based on Willy Wonka and the Chocolate Factory film starring Gene Wilder. Who didn’t want to open up their Wonka Bar and find their very own Golden Ticket?

I love that film! And the game looks great…
That was such a rewarding and incredible experience. It’s a great collaboration from top to bottom. It is another iconic and amazingly fun property we’d been wanting to do for years, and finally the planets aligned in the right way at the right time, and we went for it. Simply amazing. Also, we did Apollo in the past, based on the NASA moon missions, and anything from Skee-Ball to Plinko; from
The Price Is Right to – oh, boy, I feel like I’m on the Oscar stage, I’m going to forget somebody…

You want to thank your agent?!
Yes, exactly! Star Wars, the NFL, Namco and Pac-Man, Buzzfeed, Dave Matthews – yes, that Dave Mathews – Space Invaders, Highlights Magazine for Hidden Pictures, and National Geographic have been a fantastic partners, also. So, so many… We do a lot of licensed products on different levels, sometimes very visible, sometimes not as visible… Wait, is the orchestra playing me out? 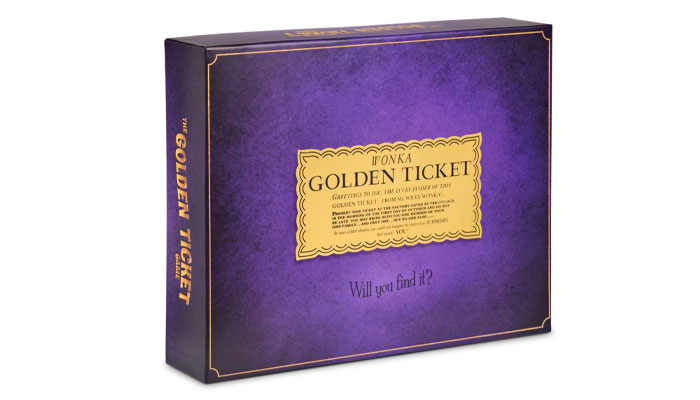 I’m afraid so! We need to go to commercial so let me ask you this, John… What pulls all those titles together? What do you look for in IP if you’re considering it for adaptation as a board game?
Identify the energy behind it. How do we capture the spirit of the brand and whom it speaks to, their core fans. But can we also create something that goes beyond that, that could pull new people in as well to cast a wider net. Then, how can we innovate?

And why Tetris, then?
Tetris is so ubiquitous in our culture, and we felt there was still some innovative space to play in for today’s tabletop gamers. We also wanted to create something that would live up to the Tetris brand’s expectations. They play it, they live it, they breathe it. It was important for us to create something they’d be excited about and that they’d enjoy; something true to the brand, but unique… And something that could stand on its own. Just to hear their excitement from playing it is, I think, the true test.

And visually, it’s a treat! It really services that brand…
Thank you! It’s important to have a nice table presence, especially for a Tetris game. It should be the hub of play, where the energy’s going to come from. Then the tetriminos that you can hold and drop into towers, just seal the deal. The experience begins with the packaging… That’s where the whole promise starts, then it sets up the expectations for the experience. You want to execute that all the way through the experience, from on shelf, to unboxing, and through whatever’s happening on the table when you play. 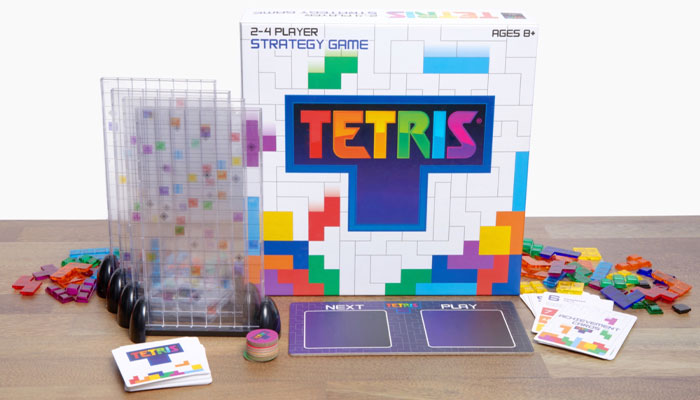 Are there any doors you wouldn’t want to knock on? Any IP that you just wouldn’t try because it’s not right for you?
Good question. I would have some pause on IP that really means a lot to me personally to ensure the play was spot on. For example, John Hughes, the film director, and writer, is on my Mount Rushmore of film directors. I would tread carefully with any of his material.

One last question, John… What’s next for you?
Lunch! Then it’s back to the sandbox. I can’t say what we’re whipping up exactly but will leave you with: you haven’t seen anything yet!

Noted. Thank you for joining us, John – some really interesting insights. I think I’m right in saying you have another game coming out soon, right? Junior Detective? Perhaps you’ll join me again to discuss that on our Mojo Nation site?
I’d would love to! Thanks for asking me.

My pleasure. Thanks, John. 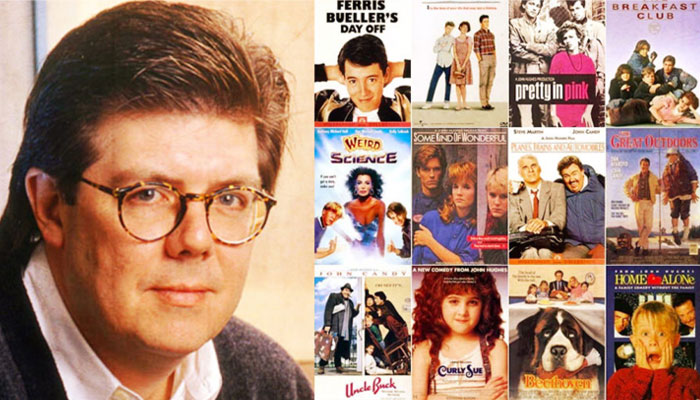