Posted on 30th May 2018 By Billy Langsworthy 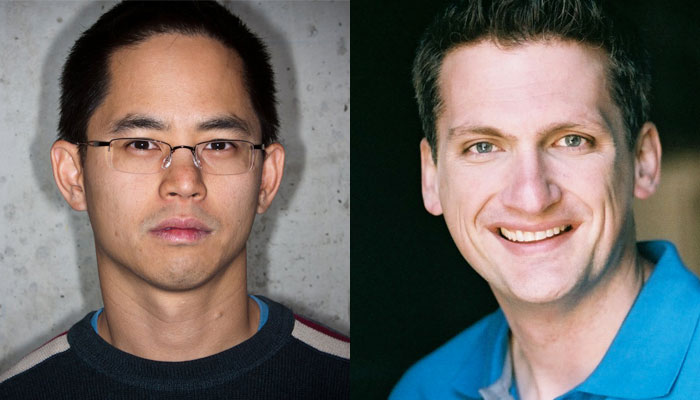 Sen-Foong Lim and Jay Cormier are the board game design duo also known as the Bamboozle Brothers, creators of titles including Junk Art, The Godfather: A New Don and Akrotiri.

Some of most versatile designers in the business, Lim and Cormier have created a raft of popular titles across Euro games, party games, social deduction, dexterity games, dice rolling titles and the list goes on.

We caught up with the Bamboozle Brothers to find out if their design process changes when creating licensed titles, how they split development duties and why they feel the industry has never been more creative than it is right now. 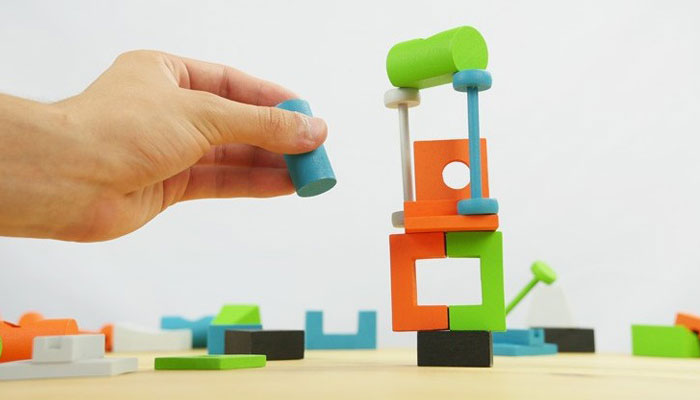 What brought you guys together and how do you split design duties on a project?
Sen: We met in University, in glorious Hamilton, Ontario, Canada at McMaster University. We met over a mutual love of computers, games and movies. Jay and I ended up living together several times as housemates. Beyond game design, Jay’s the guardian of my children, was the MC at my wedding, and my bestie, even though we’re separated by thousands of kilometers. So we started out as friends, really!

We split design duties primarily along these lines: Jay does a lot more of the graphic design and I do a lot more of the convention planning and travel now that my kids are older and he was blessed with twin boys last year! Other than that, we work on things pretty much 50/50.

Can you talk us through your design process on a project that isn’t tied to a licence? Does inspiration primarily come from other games you’ll play or does a particular theme or mechanic kick-start development?
Sen: Sure! We typically start by just bouncing ideas around. A lot of “what ifs” and “imagine ifs” get bandied about on our forum. There’s definitely a lot of inspiration gained from playing other games and trying to improve upon existing scaffolding, though we tend to find games in all sorts of real-life events. Even things as simple as words or titles can fire off that spark of creativity for us.

It’s a great thing about working in a partnership – you have someone to bounce ideas off of who can be more objective about the concepts. Regarding the theme vs. mechanism argument, I’m personally more of a mechanical thinker than a thematic thinker, but I’ve come to understand that in the end neither matter as much as the overall game experiences. As designers, we merge themes and mechanisms to create experiences that we hope gamers want to engage with.

Jay: Sometimes it’s an idea of how to move pieces around, or a twist on a mechanic that seems neat. Other times it’s a cool phrase that is said, and then we wonder what a game with that name would be about. That’s actually how Train of Thought became a game! Sen posted a comment on a forum we share and said something about following his train of thought, and then in brackets said ‘that’d be a neat name for a game – what would that be about?’ – and we were off to the races on that one! 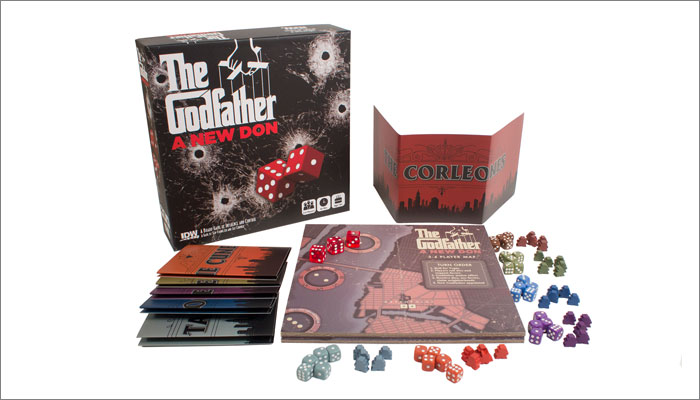 How different is the process when it comes to a licensed game like The Godfather: A New Don? Do you find the constraints of a brand boost creativity or hinder it?
Sen: I honestly love the constraints! The process is somewhat different in that we usually have a lot more restrictions with how game mechanisms are going to reflect well-loved characters, settings, or events to the players. If I like a property, I will dive deeper into the world, the lore, the characters. A game, however, needs to appeal broadly; not just to the hardcore fans. While I always try to give little nods to the really dedicated fans, the whole game can’t be these ‘in jokes’ or it’ll fail to meet the expectations of the more casual fans.

When we get the theme given to us, like a show or comic book, we then need to find the mechanisms that will represent what fans of the property believe they should be experiencing during a game about that property! A game about like The Godfather: A New Don should be about taking over New York, making people sleep with the fishes, and making people offers they can’t refuse, capiche?

Jay: Yeah, sometimes it’s great, like Sen says – constraints are the mother of invention, but sometimes they’re super frustrating. We had a heck of a time coming up with a new twist on the social deduction game while still trying to make a game that would satisfy fans of the Orphan Black show. We thought players would want to play as each clone (and they probably really would) – but that didn’t end up working thematically in a deduction game, because in the show, they’re not trying to deduce who is who (although there might be some clone swapping once in awhile). So once we figured that out – then we knew that we had to play factions trying to manipulate the clones and in the end we’re super proud that we came up with a new twist on social deduction! 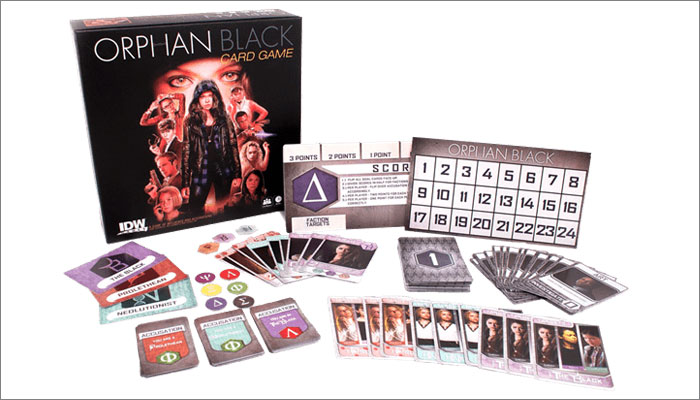 How do you stay creative?
Sen: I take a lot of showers – that’s where I do the majority of my thinking! I also consume a lot of media. I’m constantly filling my brain with information from comics, podcasts, television shows, research articles, etc. At some point over time, the brainsoup gets stirred around until something good comes out!

I appreciate constraints and timelines. I feel these limitations actually help me to be more creative. They ground me so that I’m not paralyzed by the vast openness of a blank canvas. I can work with limitations. Sometimes, I feel like I’m wandering without direction, lost in the desert, if I don’t have some placed upon me.

Jay: I’m like Sen – well, not about the showers – though I do take them daily… I like to consume a lot of media – video games, other board games, cool TV shows, movies and comics. I get inspired when I see someone doing something new in a medium. I think, ‘wow, this medium has been around for this long and still people are innovating and trying new things – awesome!’

Do you think the tabletop space is in a good place creativity-wise?
Sen: Of course it is! I think tabletop allows for many different types of creatives to flourish. You like to write? Great! We need some lore for this project! You like to draw? Amazing! We need illustrations for that project! I always say that game design is much more of an art than a science, though there’s a lot to be said about how math, psychology and other similar subjects can apply to game design. It’s how those subjects are used to make engaging games that is the almost unseen but really creative part! Good design, as they say, is 99 per cent invisible!

Jay: It’s never been more creative than right now – and it will be more creative every year going forward. It has to be! Players get tired of the same old game using the same old themes. This is why you get games like Ice Cool or Bob Ross: The Art of Chill or Fold It – they’re taking a concept or theme that’s totally new and making something exciting!

We try to pride ourselves in our versatility and keep trying to gain experiences in all sorts of different types of games. We’ve made Euro games like Belfort and Akrotiri, party games like But Wait There’s More and Train of Thought as well as D&D Rock Paper Wizard, social deduction games like Orphan Black, trick taking games like Djinn, abstract games like Tic Tac Moo and This Town Ain’t Big Enough for the 2-4 of Us, quick reaction games like Zombie Slam, dice rolling games like Godfather A New Don, and dexterity games like Junk Art. 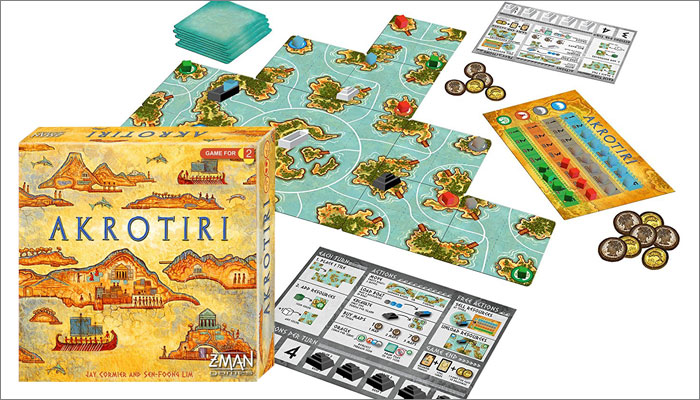 If someone has never played one of your games, where should they start?
Sen: If you’ve every wondered if there was a two player game that had a bit more crunch to it but wasn’t about war, you should definitely pick up Akrotiri. That’s probably our favourite game due to the history of it and the unique ‘treasure finding’ mechanism.

The aforementioned The Godfather: A New Don is underrated, in my opinion, and is a really fun and quick-playing game if you’re looking for one that seats three to six players and wraps up neatly in 45 to 60 minutes after rules!

Probably the most accessible of our games, however, is Junk Art. With all of the brightly coloured, chunky pieces, that one just begs to be played. As it comes with over a dozen modes of play, you’ll have challenges for days! My favourite city in Junk Art is Montreal – it’s super fun!

JAY: Well if you look at my response to the previous question you can see the category to each game to see which might appeal you the most! I love me some Akrotiri, but it’s hard for anyone to not enjoy a game of Junk Art! 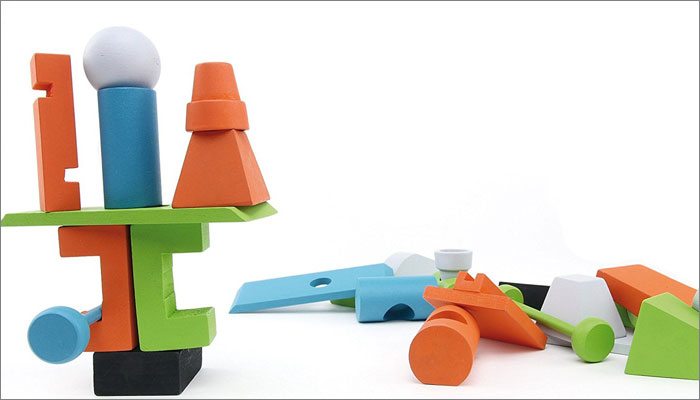 What new games from you guys can we look forward to playing this year?
Sen: Let’s see! We have an upcoming Kickstarter for the standalone expansion to our party game But Wait! There’s More! It’s called But Wait! There’s Even More! and it features more of the wacky inventions players have come to know and love!

We also have an expansion coming up for D&D Rock, Paper, Wizard that really ups the ante by bringing in iconic wandering monsters like the Beholder and the Gelatinous Cube as well as magic items like the Ring of Spell Storing and the Cloak of the Mountebank. We’re working on expansions for Akrotiri and Junk Art as well. So lots of stuff! What got released this year, Jay?

Jay: This year we have Djinn, a trick taking game, and Tic Tac Moo, a cute abstract thinker – both from Huch & Friends. They’re a German publisher, so we’re currently uncertain about North American availability.  We have a couple of word games that have been signed, that we hope will be released in the near future – Lost for Words, a quick paced word creation game that’s over in 20 minutes and Word Bird, an interesting game where you have the beginnings and endings of words that you’re trying to make a chain with to re-use these cards.  We have a couple of family games we designed and signed that are in the works – the titles will be changed, so we can’t even tell you what they are now!

Early 2019, we have Complex City – a tile laying game set on a alien colony – coming to Kickstarter with Big Kid Games. We’ve also recently signed on to design what promise to be amazing products that will hopefully be out in 2019 as well.  Our most exciting news, personally, is that we are about to ink a deal for a project that will make us both so happy to see in print!! #secrets. Maybe we can come back and talk about it in the future! 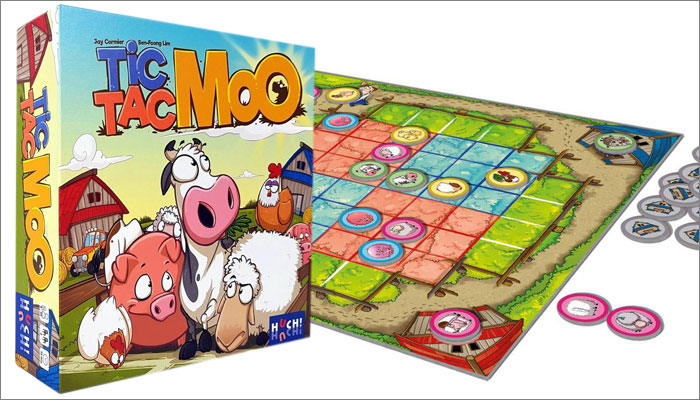