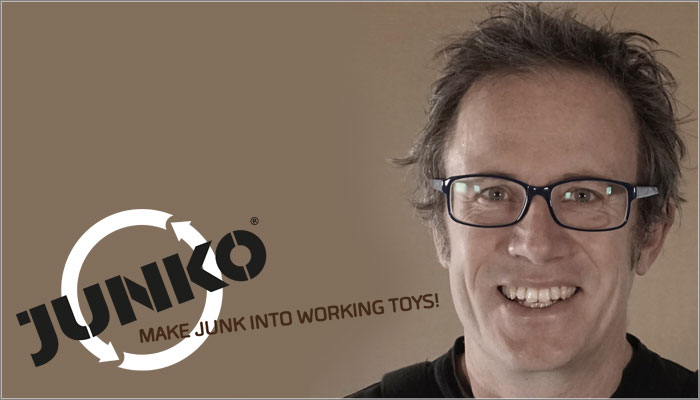 The Rope family were creating a model car out of a juice carton when the wheels came off the project, literally, as they struggled to find anything they could use to make working wheels from.

Rather than binning the concept and heading to the toy box, Pete Rope was inspired to create JUNKO, a new toy brand that allows kids to turn ‘junk’ into endless play possibilities, be it a jeep made from a shoebox, a ship constructed from cartons or a double decker bus created out of a cereal box.

We caught up Rope to learn more about his journey to date with JUNKO, and what’s next for his eco-friendly toy brand. 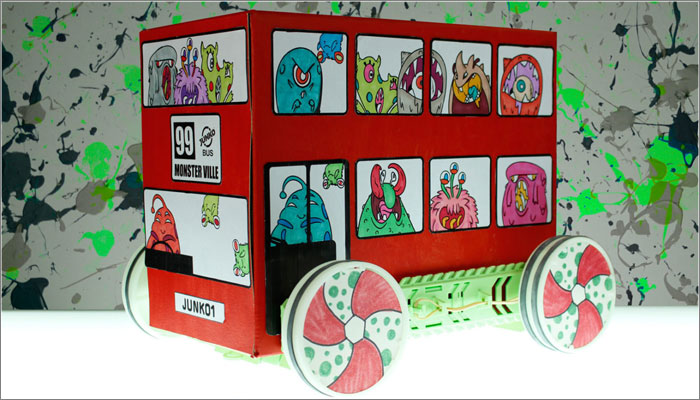 For those who may be unaware, what is JUNKO?
JUNKO makes junk into working toys. It’s responsibly made in the UK from recycled plastic. It’s an extension of junk modelling, which most kids love, and is a STEAM toy and great for kids’ development in the same way junk modelling is.

There are 3 kits: Zoomer Kit (for making crazy vehicles), the Water Kit (for converting your Zoomer to whizz in baths and paddling pools) and the Build Kit (for making houses, castles or even space stations). You can make thousands of different toys out of each kit, as many as you can dream up as it’s all reusable.

JUNKO comes with J-Fix clips that use hidden rare-earth magnets to hold junk in place so you use less tape and glue. And the kits include our original J-Heroes comics and posters all about some really inventive kids from outer space who are saving the world from the evil polluting rotter, L’Fill.

It’s one of those toys where you get it once you see it working and see what you can make. We’d like kids to not always want a new toy – if they want a jeep for their doll or action figure, why not make one from JUNKO; it’s way more satisfying, good for their minds and better for the planet. 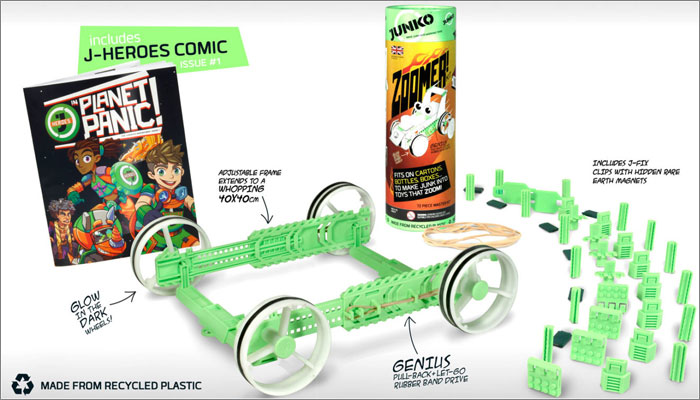 Where did the idea for JUNKO first come from?
I was making a junk model with my kids (we all love making stuff) and we came up short when we got to the wheels. I thought ‘mmm…’ and googled to see if you could buy some, the answer was no! That was the idea. Extra motivation came from my concern for the amount of throwaway plastic toys that kids end up with and wanting to do something about that.

How does JUNKO help to fuel kids’ imaginations?
JUNKO is open-ended play. It gives kids tools to make better junk models, but they still have to work out how to create a toy from disparate bits of rubbish. They have to imagine what they want to make, form a creative brief in their head and then set about solving it.

Our instruction manuals just explain how the frame and J-Fixes work, but even those require ‘hacking’ as junk is all so different. It’s a very different experience to following a 50-step instruction manual to make a pre-defined kit. The level of problem solving required insists on creative thinking which is what I think really excites kids. This is why junk modelling is part of the school curriculum; kids have to learn divergent problem solving, test things out, develop fine motor skills; they have to imagine and build their own little worlds. 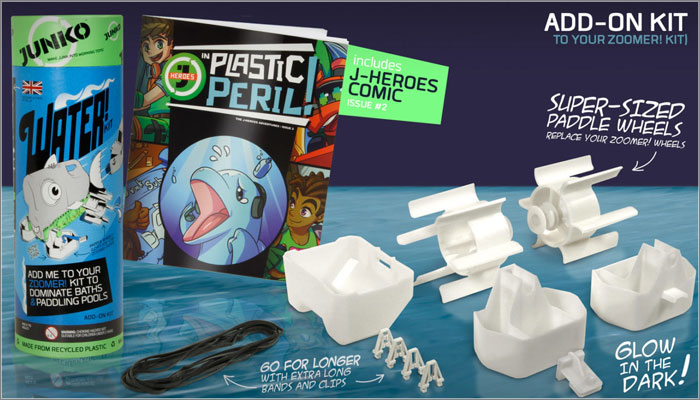 Can you talk us through your development process behind one of the kits?
All the kits stemmed from the Zoomer Kit. The development process really wasn’t some slick, polished thing. It was messy, time-consuming and at some points frustrating, but I like all the battling away to get to something that works (in hindsight at least!).

First up was to make a fairly open brief. I wanted a set of wheels which could fit round pretty much any junk, and I wanted it to be powered but I didn’t want to use a motor. Next was the R&D. I work with a sketchbook, a CAD package and a 3D printer. I’d sketch out some ideas and build CAD models which I then 3D printed out to test. I went through that process again and again for one and a half years.

Sometimes I’d do a couple of pages of writing to reframe my thinking, then go back to sketching. I’m not an engineer so it was an iterative, trial and error process. During that time I would show it to my wife and kids and we’d test it. We have films of many epic fails. Looking back I suppose the benefit of this slow approach was that it gave time for other ideas to pop up and develop. The J-Fixes clips are examples of that.

Once I had the working prototype I tried to talk to injection moulders, and I really struggled there. I think many inventors do. Many moulders were very helpful and actually helped to evolve the designs, but I realised that there were disparities between their approach to costing. Some were cheaper on tooling, but pricier on production and some the other way round. My ignorance of the subject was a real problem.

My patent lawyer came to the rescue. He introduced me to a wonderful plastic engineer called Andy Booth. He is the man who took my designs and tweaked them to be injection mouldable. He designed and supervised the tooling and managed the first production run. Andy halved the tooling costs I had previously been quoted which is what allowed us to create the Water and Build kits too.

In tandem with the tooling, I was working on the branding and packaging. I like to have a few jobs running simultaneously; it stops me stagnating. I was originally a graphic designer so I was more at home here. Again, I showed many iterations to people I trusted and got invaluable feedback. It’s always slightly painful showing something I know isn’t fully evolved or working like it should, but it has to be done, and I always really benefit from other points of view.

And we finally ended up with a product! 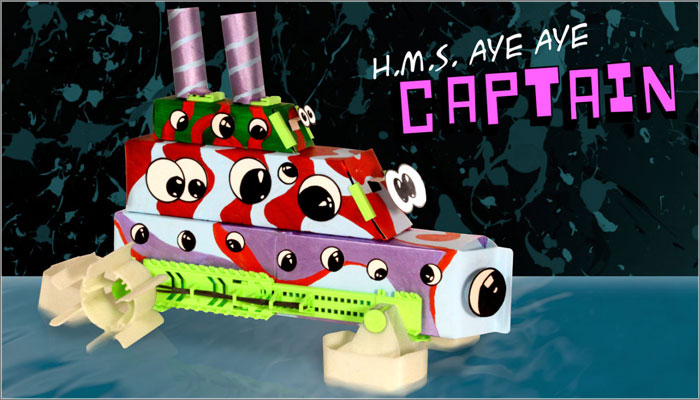 How do you stay creative?
I was a creative director in a creative agency for many years, so this is something I’ve thought about a lot! Going to art college helped get me on the right path with habits that never go: hang out with creative people and spur each other on in what you consume, read, listen to music, watch films, embrace art, seek opinions and learn to look beyond the mainstream for interesting things.

I seek out experts in any field as I find it really inspiring when they talk about what they love and understand; podcasts are great for this. I find creative people are almost always interested in lots of different stuff. I think that’s where ideas come from. What you put into your head affects what comes out.

If I want to think up or develop an idea, I need paper and a pen and a finite amount of time to get it all out. I love a train journey for that.

Agencies traditionally work well into the night, usually because of insane client deadlines, but as I got older I realised you’re better of going to bed and the next morning, you’ll probably have a decent idea. Your brain works while you sleep and you’re more creative when you’re not knackered. I also like to change my mind state, have a few drinks and blast some ideas out.

The last thing I would say is if you’re trying to get an idea to work, you need to be prepared to throw away the thing about it you most love, often that’s the sticking point. 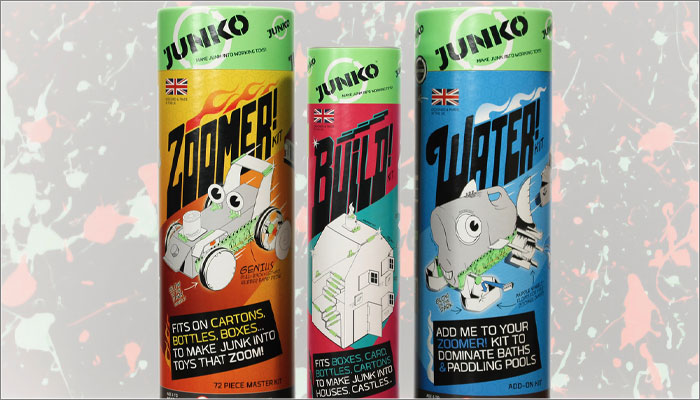 What’s next for JUNKO?
Our mission now is to spread the word. It’s a very new kind of toy and our challenge is to get people to understand it, but the good thing is people seem to like it once they do. Then we have plans for making some cool little add-ons that kids can buy for their models – I have my eye on a paper ball firing trebuchet! We’re also looking at ideas for larger kits and a J-Heroes Christmas annual.