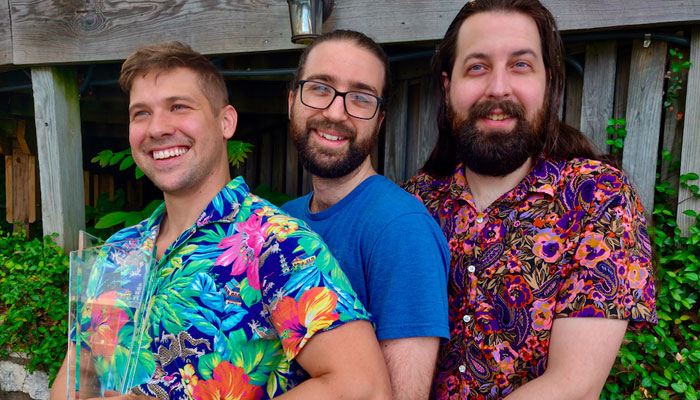 Guys, it’s great to catch up. Before we dive into Clue: Treachery at Tudor Mansion, how did you all meet? And what brought you into game design as Just Playing Games?
Leo Taylor: We met working at an escape room in Austin, Texas, and we’ve all been artists in some way. I previously worked in the video games industry as a sound designer, but honestly, I wasn’t very happy. I didn’t like working in-front of a computer all day, and I loved playing board games as a hobby. So, I looked around and started working in the escape room industry, where I met these guys.

George Feledichuk: Like Leo, I’m also a musician and I moved to Austin with my band. I met Leo at a comedy club where we were both working, and then we ended up both working at the same escape room. I’ve worked in several different industries, but didn’t really find my place until joining the escape room sector. It just clicked.

Thanks guys. And David, what brought you to the escape room business?
David Rudow: Well, I went to school for physics and got my masters in Engineering Physics. I moved to Austin, needed a job and I’d done escape rooms before so I looked to see if any of those places were hiring! A week later, I had a job with these guys!

Fab! And what were your roles at the escape room?
LT: We did a bit of everything. We ran games but we also designed rooms too, thinking of puzzles and theatrics – so it was a form of game design.

That got me in the door with Hasbro and shortly after they reached out to inventors asking for an escape room system. I’d just started developing games with David and George at this point, so we jumped at the opportunity. We created a concept, submitted the idea and it got picked up! 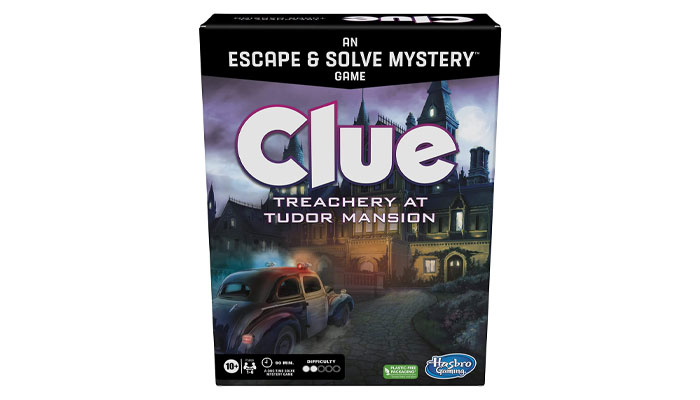 Amazing. Clue feels like a neat fit for the escape room board game space. What did the first few steps look like in bringing this iconic brand into an escape room board game format?
DR: We did a lot of research into what was already out on the market in terms of ‘escape room in a box’ games. We played lots of them and discussed what worked and what didn’t work, and figured out a base system from there. We then looked at the key elements that really made Clue feel like Clue. We took those pieces, added them into our system and put it together from there. 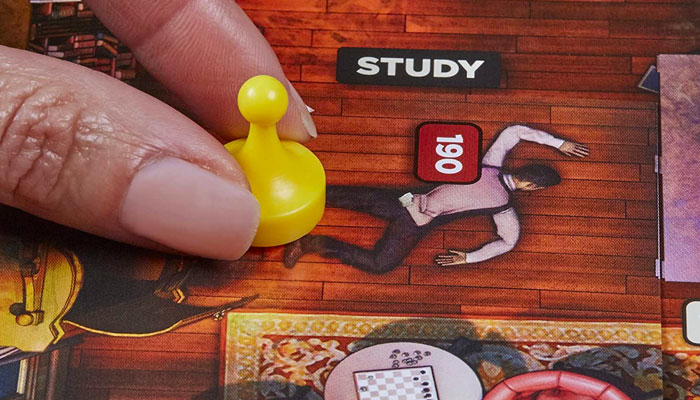 You mentioned there’s a lot of escape room board games out there. What do you feel some of those were missing that Clue: Treachery at Tudor Mansion nails?
GF: One thing that was missing was a sense of space. We developed a system where as you progress through the game, you’re physically exploring and unlocking rooms. Having the presence of the board really allows you to place yourself within this world – and it provides an additional place for puzzle clues!

The other thing we noticed was that lots of these games have destructive components. You’re required to cut something or dip something in water to help solve certain types of puzzles, but as a cornerstone, we avoided that in our design. We wanted players to be able to repackage it up and play again.

And with all that said, it’s important to stress that we love a lot of the other escape room games – I’ll play Unlock or Exit anytime!

LT: Hasbro also asked us to make it family friendly. They wanted your average family, who maybe has never done an escape room, to be able to enter the genre. That was a great constraint because it steered us towards the traditional Clue board game, where you have the board and you’re moving your pawn. We wanted to innovate, while making it accessible. 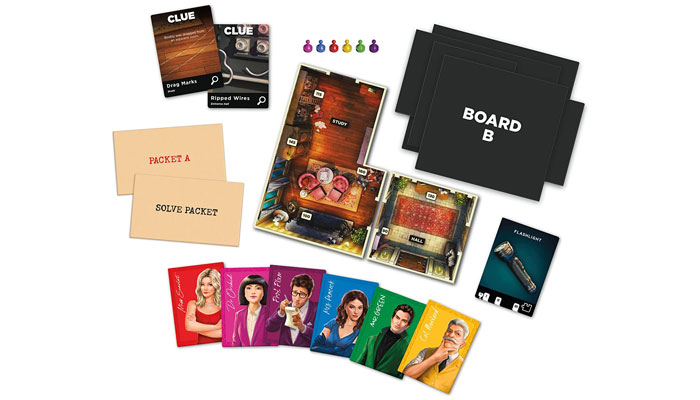 DR: It also speaks to our approach to puzzle design. When we started the project, we really looked at each of the rooms and what’s in each of them. We wanted to assess what we had to work with, because it was important that the puzzles made sense with regards to which room they were in. We designed the puzzles to make players feel like they were in that room.

You guys mentioned that having the family friendly constraint helped fuel your creativity. Were there any other ‘limits’ that proved useful during the design process?
LT: Having a mystery solve at the end of the game. It’s a part of Clue’s DNA and the need to incorporate that pushed us to innovate the system, and the wider escape room genre. And Hasbro were great to work with on that, and throughout the process. They would jump on calls and help immerse us in the Clue brand.

GF: I’d add that the ‘limits’ of the layout of the mansion helped create a path for us to move the players through. Having this structure in place then allowed us focus on the puzzles themselves. 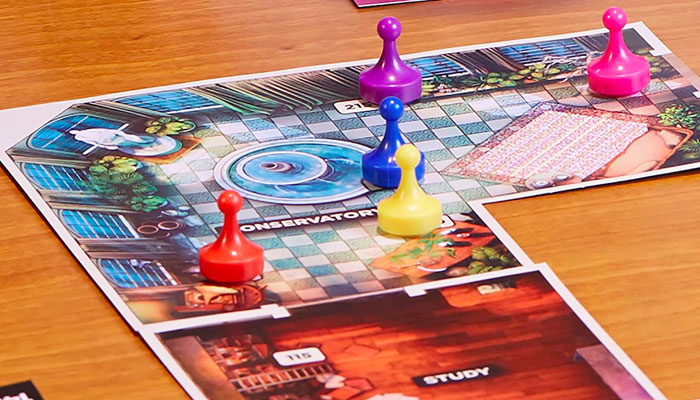 Great. And with there being three of you, how did the design process work? Did you each have specific roles?
DR: Between the three of us, we have a wide breadth of knowledge, skills and experience. Organically, we all took on different roles. For instance, Leo is really fast at prototyping, George is the lore master and a great writer so he looks after all of the copy. We are more than the sum of our parts, and there’s not a lot we can’t figure out between us.

LT: I should say, David didn’t mention that he’s a great engineer, puzzle designer and tinkerer. He could probably make any electronic component. I hope one day we get to make a very complicated electronic device!

DR: I have my fingers crossed for that!

Well, aside from that potentially exciting electronic wonder, should we expect to see more games in this Clue series?
LT: Yes, we plan on it being a series, much like Exit or Unlock. And they won’t all be set at Tudor Manor – we’ll be expanding the Clue-niverse to different locations. Same characters, same Clue DNA, but the locations and the mysteries will be different. 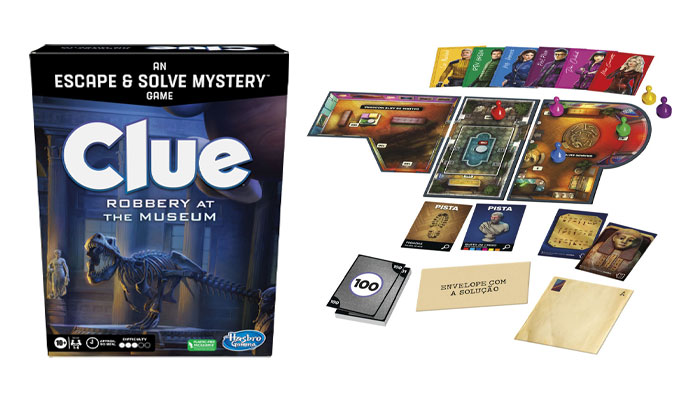 The ‘Clue-niverse’ – like it! And yes, I can see we also have Clue: Robbery at the Museum and Clue: Sabotage on the High Seas – exciting stuff. I imagine the system you’ve developed could also work for other Hasbro brands too, right?
LT: We can’t speak on it, but we’ve dipped our toe into other IPs.

GF: The system is fundamentally ambiguous, so we’re excited to explore the system in other ways.

DR: How cool would a Jenga escape room game be? Or a My Little Pony escape room? We’re excited.

And for any companies reading that haven’t met you guys before, what should they know about the sorts of concepts you guys are creating?
LT: We have full portfolio games spanning different genres, from space epics to family games. We’re constantly developing concepts – it’s an addiction at this point! But please do reach out – we’d love to connect.

Guys, this has been fun. Before we wrap up, I have one last question. What helps you have ideas?
GF: Well, Leo has game dreams! He wakes up and concepts have come to him in a dream!

LT: David has them too now.

DR: I do! I had my first game dream last week.

LT: Ha! Well, it’s an answer you probably get from a lot of creatives, but it’s about getting new and interesting inputs by seeing things from outside of your industry or immediate interests. When you work in games and see games all the time, you end up getting struck by the same kind of inspiration as lots of other game designers. There’s nothing wrong with that, but I think it’s important to get out of your bubble to find fresh inspiration.

DR: I agree with that. Also, do you know the ‘Tetris Effect’?

Where you do something so much that you start to see it everywhere… So people that play Tetris a lot sometimes see shapes that could fit together in the real world.
DR: Exactly. Well, I’ve started having the same thing with board games. I went to the beach last week and started thinking about how you could simulate whale watching in a card game. It’s about recreating certain feelings or emotions in games. I’m constantly looking at things and asking: ‘How could this be a game?’

And George, if not through dreams or the Tetris effect, what works for you?
GF: I listen to a lot of music. The moods that different kinds of music create, really help my creative process. If I have the right music on when designing, I can envision a lot more clearly the idea.

Interesting. Well guys, a huge thanks for this. And you’re in the running for a TAGIE award this week too, right?
DR: Yes! We’re nominated for the Rising Star award.

Well, good luck on that! And good luck for the ongoing success of your Clue series.