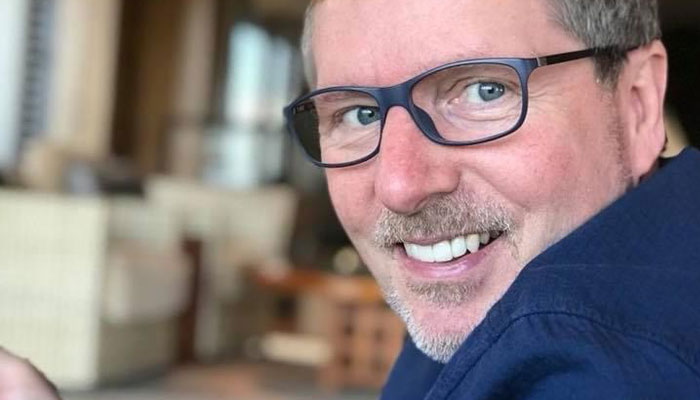 One of Hasbro’s new games for this year is Foosketball, a fast-paced head-to-head skill game that combines foosball and basketball.

It comes from invention group KidKenn, a family business led by Kenn Morton, formerly VP of Design at Fisher-Price. We caught up with Kenn to find out more about the origins of Foosketball – and what made Hasbro the perfect home for the game. 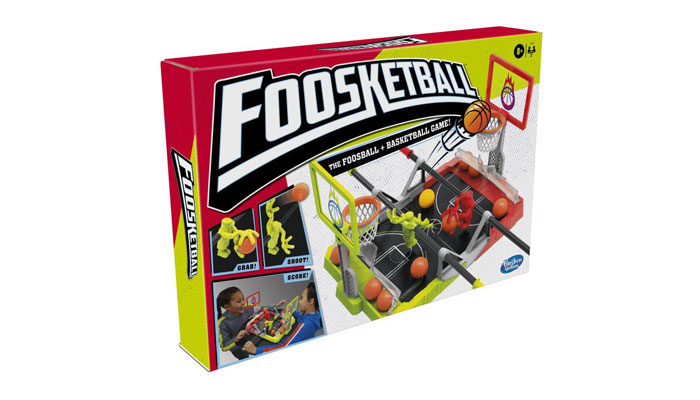 Kenn, thanks for making time! How did you first get started in the toy space?
It was a little bit random! I always had a love for designing stuff for kids and worked for a company developing car seats and juvenile products at the beginning of my career. This experience ended up getting me a job at Fisher-Price as a car seat guru.

While I was there I won an IDEA Gold Design Award for an infant Car Seat I designed and built a great reputation in the company for being innovative – so they moved me into a blue-sky team and that’s when I fell in love with creating toys. It is just a lot of fun and is very rewarding as I’m truly a kid at heart.

Our family has aslo always been big into toys and games, and I’ve always played games as a child. Many of the best concepts I came up with throughout my career were inspired by my kids through observing them play.

Amazing. So what triggered the move from Fisher-Price and into setting up your own design studio in KidKenn?
After 30 years at Mattel, with my last five years as VP of Creative based in Hong Kong, I felt like I needed to escape from the corporate world. I found myself in a position where you realise you’re not really being so creative anymore. I missed being hands on and wanted to get back into the grassroots of being a designer again.

So, when it came time to re-patriot back to the States, I felt it was a great opportunity to start my own business with my family as an independent inventor. That has always been my dream and the timing was perfect!

Great stuff. Let’s dive into your latest launch – Foosketball with Hasbro. Where did this idea come from?
I had done toys all my life, so I wanted to challenge myself and create games. I remember sitting in the Hasbro showroom at Toy Fair and the CEO said, “We want to see something that we’ve never seen before.” My kids and I love sports and so we started thinking about how we could do something different with basketball as most of the games in the market are finger flipping mechanisms. I remember a basketball game I played as a kid – aging myself – where a ping pong ball fell into holes, and you used wires to flick it and shoot it into a basket.

We looked at the classic game of Foosball and used that as a foundation that we could apply to basketball. I took the control rods and literally glued some plastic spoons on it that enabled you to pick up the ball and shoot baskets. It was simple and really worked! 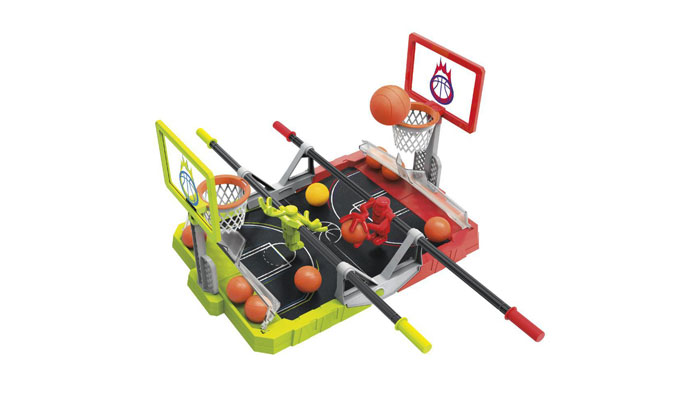 Does Fooketball fit in with any wider goals for KidKenn in terms of the sorts of products you’re inventing?
Yes, because we like to create real experiences for kids where they can put themselves into the game. The game makes them feel like they are a pro playing basketball. That’s where we come from when creating new concepts. We feel it is important to create concepts that are ownable. Foosketball is a good example of that. The more ownable the concept is, the more likely that a company will take it.

We’ve also become an expert in table-top sports games; we have a lot of them! Name the sport, we have a game for it!  Okay, we haven’t done curling yet, but it’s on the list! We don’t just want to go to sports game manufacturers with these, we want to get them out in the mainstream because we know in today’s world that kids love sports games and there are many positive role models around that.

Foosketball is also a great name. You know how to play before even opening the box…
Yes, I don’t know when we came up with the name, but it makes sense. It’s Foosball and basketball; any idiot on the street could’ve come up with it, but I was that idiot! 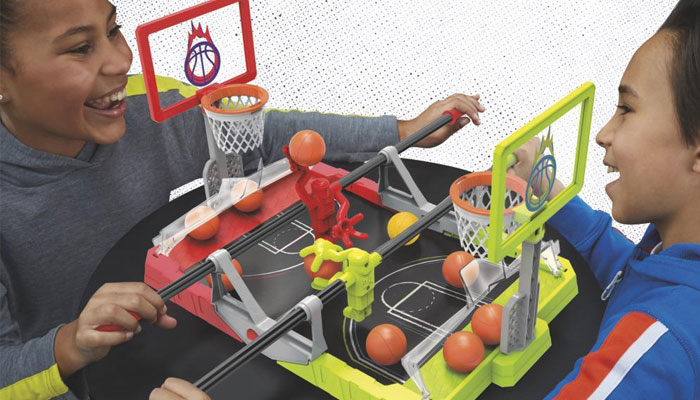 What made Hasbro a good home for the concept?
One of the things that is great about Hasbro – and a few of the other big toy companies – is that you can actually pitch the ideas in person or on a video call to their team. Some companies have gone to “Dropbox-style” inventor relations where you upload ideas onto portals and are not sure who has actually seen it when you get a response.

With Hasbro, we were able to have an engaging conversation and opportunity to convince them in person as to why we feel they should produce our idea. We also respect them for the amazing marketing and promotional power they have to drive great ideas and properties on a global level.

Were they sold right from the pitch?
Well first, they actually passed on it! Then a few weeks later, I got a call from Tanya Thompson when I was at the gym to ask if the game was still available – I almost fell off the treadmill!

What happened is that they had a change somewhere in upper management and because the working team – including designer Pat Jackson – had championed the idea, they made some changes to it that added excitement and re-pitched it to management. They were really excited about it.  We were absolutely floored when they presented us with their 2021 Emerging Inventor Award.

We still don’t see lots of sports games launch every year. Why do think that is?
There seems to be a stigma about sports games with some of the major game manufactures, as we often get “it doesn’t fit” responses. We are hoping Foosketball will prove that way of thinking wrong as we think kids and adults really like sports and real play experiences. Every kid wants to be like a pro, to be the champion and this enables them to live that dream!

Were there any creative challenges with Foosketball that you were proud to have overcome?
Well, as mentioned, we started out with a prototype using spoons, and then I heated up and reshaped a pair of Mr Potato Head hands to make the hand fit around the ball. We sent that model out but it wasn’t a clean execution of the idea, nor did it work very well. Then my son, Tyler, used Rhino 3D geometry software to build hands and fingers that fit around the ball perfectly to enhance the accuracy around shooting the ball and it landing in the basket. It worked fantastic! 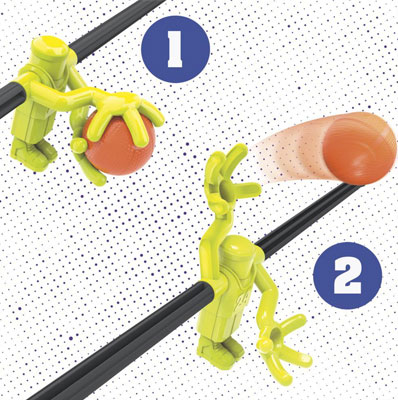 Like many dexterity games on the market, Foosketball is one of those games that relies on perfection when it comes to the engineering behind it because it’s a very mechanically driven game. It had to work really well, otherwise people would be turned off by the fact it’s too hard to play.

You want it tough enough that people play it again and again to get better, but not so tricky to play that it feels broken.
Absolutely. We realise there is a learning curve, just like Foosball, but once you get the knack, you want people to make the basket at least 50% of the time. Otherwise, kids will just get frustrated.

You mentioned your son there and your wife earlier, so KidKenn is a family business?
Yes, we’re truly a family business. It’s my wife, Venus, my son Tyler and me primarily, but we get help from others in the family – especially the grandkids on playtesting.  I do most of the tinkering, Tyler is the 3D guy and Venus, who is also a fashion designer, creates the graphics, the sizzles and presentations. We all have ideas and we work great together.

The greatest reward of the whole thing for me is not making money but are the special moments like seeing the look on my son’s face when he saw Foosketball on the shelf in Target or my wife dancing in the living room when she saw the commercial on TV for the first time. They’re the moments that really inspire me.

Before I let you go, last question! What do you and the team do to help fuel your creativity?
We play, we get out to the stores a lot and continuously look at things in a whole different way. We have brainstorm sessions and love to make things. It’s good to look at a toy or a product and think about turning everything about it upside down. We also love to party as a family and celebrate our successes. You’ve got to play, and you’ve got to love games; that helps keep us inspired.