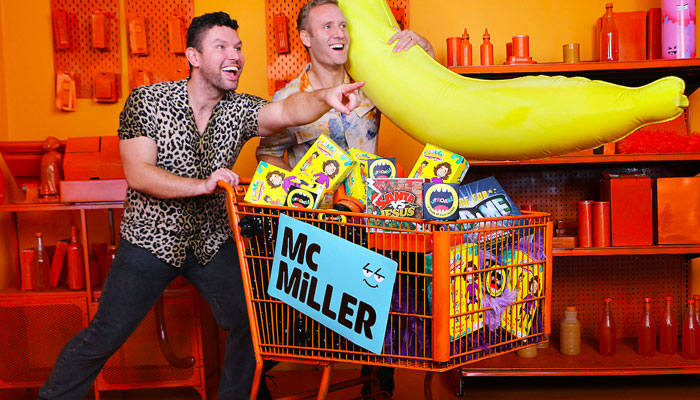 ‘Belly laughs in every box’. That’s the tagline behind McMiller, a games company founded by David McGranaghan and Julian Miller whose line-up includes Game For Fame, It’s Bananas and UpRoar.

We spoke with David and Julian to find out more about the origins of McMiller, their approach to game design and plans to launch the company’s first toy range in 2022. 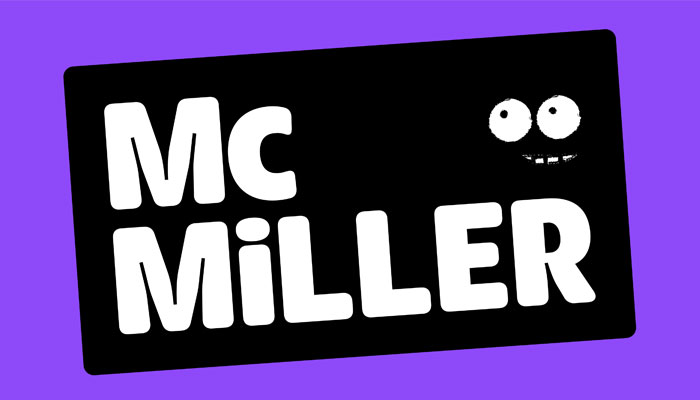 Guys, it! s great to connect. Some people we chat to say they were destined to work in games, others sort of fell into it. How did you both find yourselves in games?
Julian Miller, Co-Founder, McMiller: A bit of both in a weird way. I think we were both destined to entertain. And games, in a way, is kinda like putting on a show?

David McGranaghan, Co-Founder, McMiller: It’s true, having both worked as professional actors and writers for the past decade, we took everything we knew about entertaining people and put that into our products.

JM: We really got into board games because we grew frustrated with games we were playing with our families at Christmas. You have all the people you love in one space, this is the only time of year you get together, and you play a substandard party game… It’s not good enough!

DM: That’s when I thought, hey, there’s a gap in the market here. I used my comedy background to play around with different types of humour and realised that nothing I wrote could ever be as funny as seeing someone you love do something a bit stupid. That was how our first game, Game For Fame, was launched, and went on to sell hundreds of thousands of copies. 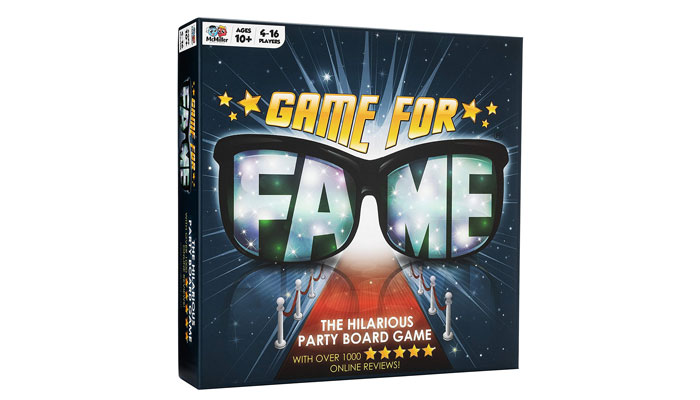 Amazing stuff. We’ve mentioned Game For Fame, but for anyone new to McMiller, how would you describe the sorts of games you guys create?
DM: Comedy. We are always focused on making you laugh.

JM: Yes, and we want it to be a very approachable entry level. Our games are for everyone. Kids, adults, grannies. Multi- generational. You name it and they can play it.

DM: Right. Short instructions! We want you to be able to start playing the game as quickly as possible.

JM: And it will always have a unique point of view.

You had me at short instructions! Now, talk us through your typical game design process – if there is one! Do you both get involved in the ideation stage?
JM: We do! It’s definitely developed over time and it’s changing as the company expands and as we learn more about what products do well. We’re now very focused on selling the games online in a very visual capacity.

DM: The first question I always ask is: Will this stop someone scrolling on social media? Because of this, our products will continue to become more visual and unusual as we strive to stand out against the competition. And you know, I work for Julian and Julian works for me. We pitch to each other.

JM: That’s right. We take turns playing client and we filter through the good ideas and, mostly, bad ideas. We also talk to our team and gather feedback. It’s a lot of brainstorming.

DM: Yep. We poke holes during the ideation process until we get that gut feeling where we just know we’ve landed on the right thing.

JM: It’s a good feeling. A giddiness, an almost escapism.

JM: It goes back to our entertainment background really. If we’re captivated after playing it 100 times, we know others will be too. 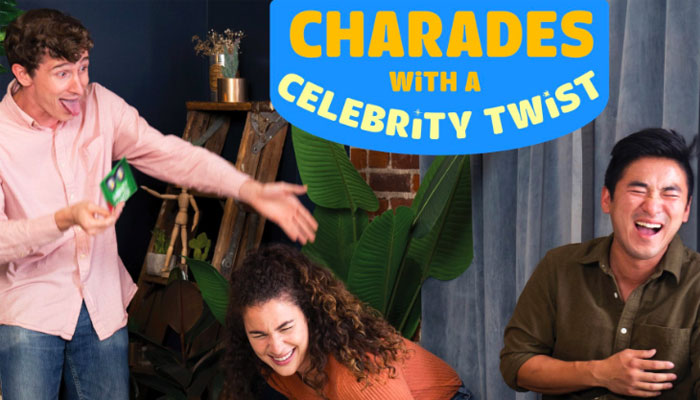 Sounds like a smart approach – and I’m a fan of the ‘stop scrolling’ test! Let’s dive into another one of your games, It’s Bananas! How did this idea come about – and did it evolve much from that initial idea to what we have today?
DM: Ah, well this game is really interesting because I started researching Julian’s Dutch heritage. We were looking at classic games that were played in The Netherlands and we came across this old game that we knew we could transform into something commercial.

JM: And we knew the Brits would love it. We wanted a multi-generational product that could entertain everyone. And it needed to be something that could be played in multiple languages, so no text of cards. That’s good gameplay for us.

DM: This game in particular lands well with adults. It’s a little naughty but not vulgar. It’s…suggestive, we’d say! 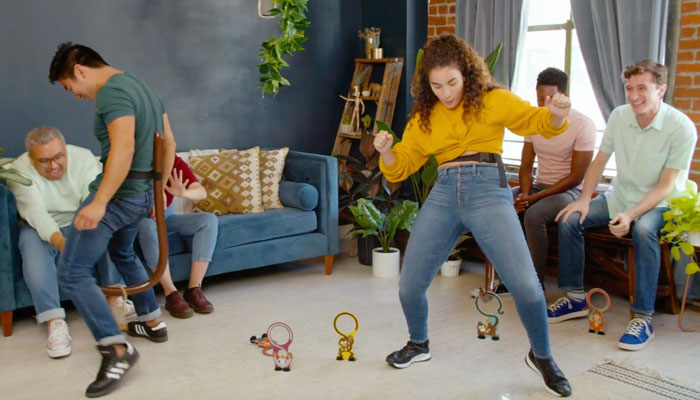 Ha! I can see what you mean!
JM: It’s been the number one selling board game and number two selling toy on Amazon.co.uk for the last seven days, so we’ve got something right!

Absolutely – and to your point earlier, it’s a very visual game. I can see people being sold on it before they’ve even donned a tail! Now, you also recently launched UpRoar – a game of silly sounds. Any Dutch influence with this one?
JM: Well, we wanted to diversify. We’ve been so heavily in the Christmas big party game market for quite some time now and while it’s been amazing, it’s also quite stressful to have all sales compounded in a couple of weeks of the year.

DM: We’ve been aggressively seasonal. And when you’re seasonal, you have big spikes in sales. We’ve had suspended accounts from PayPal, Amazon, eBay, Facebook… You name it! All because we’re selling too much in such a short period of time. They treat it as suspicious despite years of similar sales. Ah, the joys of computers making decisions! We needed more consistent sales throughout the year to avoid all these headaches at Christmas. We knew we needed something that could sell year-round.

JM: With UpRoar, we challenged ourselves to pack a comedy punch into a card game. It started as a bit more of an adult game, but it just wasn’t funny enough for us. We realised sound effects could be really funny, and now it’s our first award-winning game! 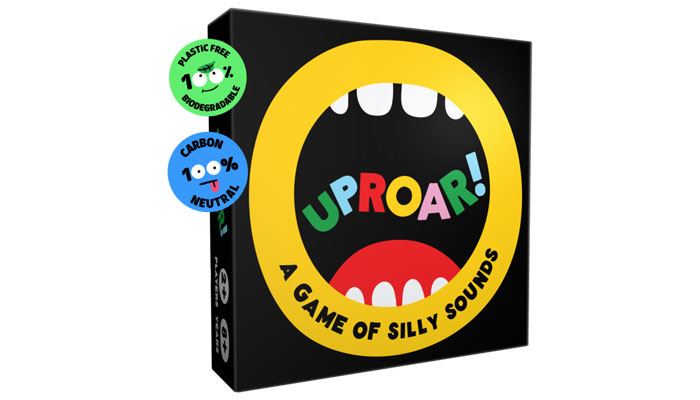 Yes! I saw it triumphed at both the MadeForMums and Dad’s Choice Awards. Congrats on that.
DM: Thanks, It’s going really well and the reviews are great. We also worked with a very talented designer Meg Lewis on the game. Working with amazingly talented people is without a doubt one the best parts of the job.

Talking of collaborations, is McMiller open to licensing ideas from the inventor community? And what sorts of areas are you looking for ideas in?
JM: We’re always looking for fun, visual party games. Games that will do well on TikTok and social media, appealing to a  wide range of people.

DM: Visual. Visual. Visual. We’re looking for WTF — What. The. Fun. It’s got to have something that makes it stand out in the busy marketplace and stop you scrolling. Also, we love multigenerational. If gran is laughing as much as the kids, you’re onto something!

When we last spoke, you mentioned you have an eco-friendly toy concept in the works. What can you tell us about that?
DM: Yes, we’re diversifying and moving into the kid’s toy industry. We looked around and felt disappointed in the lack of real effort to identify alternatives to plastic in toys. As you know, bioplastic is still mostly plastic – only 20 to 50% is plant based, the rest is still from below the ground. It’s just not good enough. We want to do better.

JM: We’re confident that we can bring out one of the most sustainable toys on the market in 2022 called AstroBeasts. We can tell you more about that in a few months, but we’re excited about our material choice and bringing that into the kids’ toy market.

We also have another game that’s out next year called Fire in the Hole and that is going to be entirely compostable. It will be made of paper, cardboard and 100% fair trade felt balls.

DM: We worked with an incredible pop-up artist in the UK, David Hawcock, to create this massive compostable pop-up pirate ship. It’s going to a big, eye-catching centrepiece type game, but all made of cardboard.

You know, we’ve learned that this industry is riddled with greenwashing, and we want to move in the opposite direction. Moving forward we want to be extremely transparent about our products and what materials they are made out of.

Guys, this has been fun. Thanks again for making the time. My last question is: How do you fuel your creativity?
DM: Art. Instagram. Pinterest. Beer. Long walks. Art exhibitions. Music. Plays. Exposure is key. It’s one of the reasons we want to move from LA back to London. We want to be surrounded by theatre, shops, different cultures, different people.

JM: Our plan next year is to travel a lot more and see what’s going on in the gaming communities in other places. We get inspired when we find new artists, new talent and new experiences!

Thanks again guys. Good luck with the potential move back to London – and also with your slate of new toys and games. Exciting times.