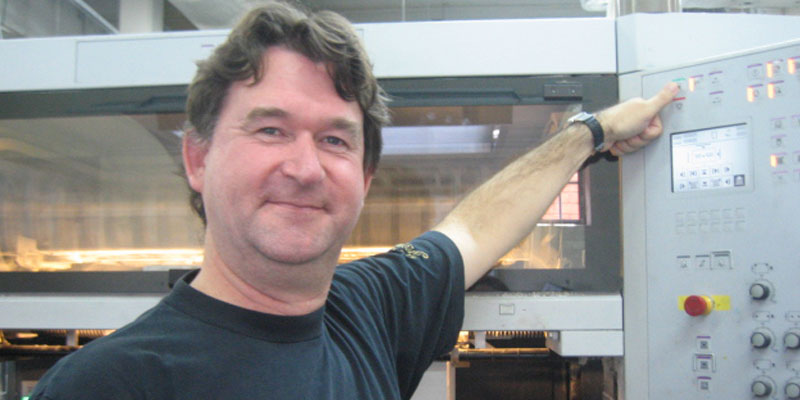 At this year’s UK Games Expo, Ominoes, ‘the dice game for everyone’, was named Best Abstract Game 2017. Only 12 months earlier, creator Andrew Harman had been cooped up in his hotel room, plotting out the first iteration of the game having been inspired by a day of chatting to publishers at UK Games Expo 2016.

Ominoes is only the third creation from the Luton-based designer and founder of Yay Games, but he’s already carved out a loyal following having already published Sandcastles (a light and fluffy game of back-stabbery and revenge set at the beach) and Frankenstein’s Bodies (where players are tasked with stitching bodies together).

Here, we spoke with Harman about Yay’s ‘Play Hard. Play Naughty. Live Better’ motto, the development process behind Ominoes and why, three titles in, he’s starting to feels a part of the games community.

First off, can you give us a quick rundown of what’s involved in Ominoes?
It’s a dice tactics game for two to four players. It involve simple six sided dice, each with the four player colours around the sides, and they are all Egyptian themed. You’ve got the sun, snakes, falcons and beetles. You want to get sets of four, all of your colour. So if you’re the beetle, you want to get four dice showing the beetle side up next to each other. Once you do that, you can take those dice off the board and score the points.

The other two sides of the dice feature ‘Yay-Ra’ and ‘Ominotep’. Yay-Ra allows the player to move any die, while Omniotep allows the player to reroll the die. Both count as wild once on the board, meaning they can be any colour. It starts off all nice and friendly, until someone does a nasty move to you! 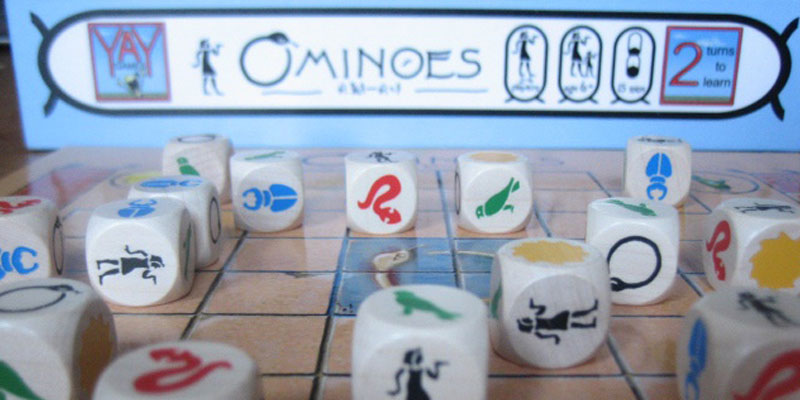 Where did the idea for Ominoes come from?
Actually, it was two years ago here at the UK Games Expo, strangely enough. We were talking to some of the other publishers about what’s doing well, and it seemed that dominoes and polyominoes were always doing well. I half jokingly said “so if I came up with a game called Ominoes, would that work?” They all said “yes”, so that Saturday night, I just laid there in my room at the Hilton thinking ‘what could it be?’ Because I’d been working on a Frankenstein’s Bodies dice game, I think it just came together that night. The next morning, I grabbed some dice from one of the traders, and just set about making it work. It’s been uphill ever since!

Was there anything you learned from the development process behind your first few games which you’ve applied to Ominoes?
Absolutely. The playtesting we did with Frankenstein’s Bodies was really cautious. Myself and Jenny have a scientific background and we weren’t quite sure what changing one element of a game would do. We’ve got a very odd approach to game design in that we’re looking at the player experience to see what happens. We’re aiming for player reactions in our games – be it “that’s my body!” or “you git, how dare you do that to me!” – rather than it being all about interesting game mechanics.

‘Play Hard. Play Naughty. Live Better’ is our motto, and now that we’ve worked that out, we aim to have that approach to design, rather than the serious number-crunching that I know a lot of designers like to do. It’s a different approach, but learning what one change can do to a game was quite an extraordinary process. We’re a little freer in the way we change things now.

Two games in now, do you feel like Yay is fully a part of the games community now?
We’d love it to be our full time job but at the moment it’s a part time job. What we love is that this is our fourth UK Games Expo (the first one we did while we were Kickstarting Frankenstein’s Bodies) and what’s lovely is that we can walk round the show and see people we’ve seen at previous shows. We’re starting to feel a part of the big club that is gaming and it’s lovely.

Have you got more games in the pipeline?
Oh yes! One of things we want to do is use the Ominoes dice for a whole bunch of different games. We’re trying to invent games around these dice. We’ve got a few ideas and we were discussing a few ideas with some designers last night and that’s already sparked off lots of ideas already.

We’re also developing non-Ominoes games. We’re working on a little card game called Not My Monkeys which has gone through about five different variations, but now we think we’ve cracked it. It’s easy to learn, quick and very fun.