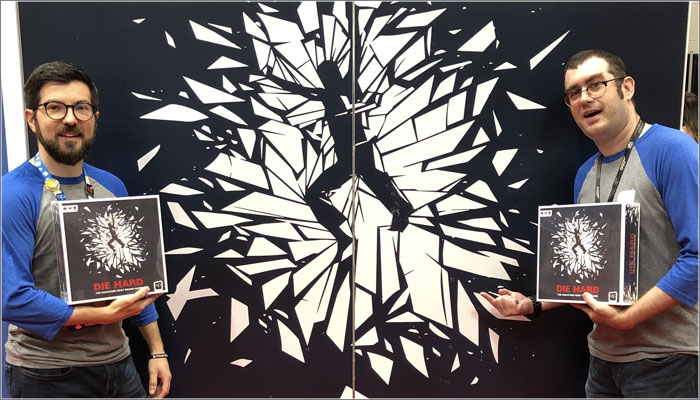 Iconic 1988 action movie (and Christmas classic) Die Hard made its tabletop debut earlier this year in Die Hard: The Nakatomi Heist Board Game from USAopoly (The Op).

The game sees one player step into the bloodied feet of John McClane, while everyone else plays as Hans Gruber’s thieves. The game takes place on a double-sided board across three acts replicating the story of the film, complete with iconic characters and quotes.

The thieves must work together efficiently and signal each other effectively to hack through the vault’s locks and stop John McClane, while McClane must plot his path and manage his cards carefully to fight his way through and kill Gruber.

We caught up with the designers of the game – The Op’s Pat Marino and Sean Fletcher – to learn more about the development behind The Nakatomi Heist, and find out how the team decided what elements of Die Hard to bring to the tabletop. 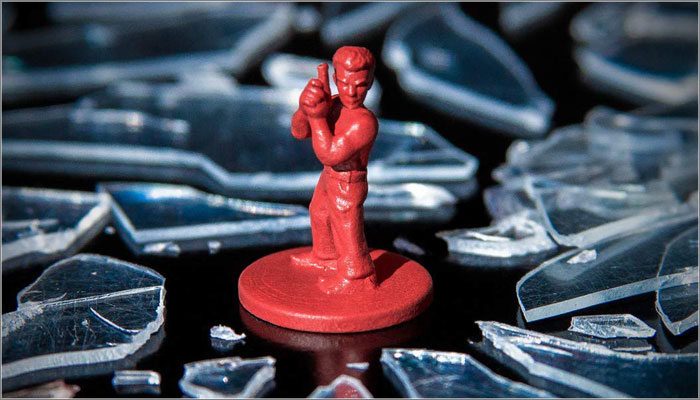 How did you get started in the world of game design?
Pat Marino: I started as a fan of hobby games and worked my way into designing games from there. As a kid, I played Magic: The Gathering and HeroQuest, as well as all of the classic games. After college, I discovered Catan, Agricola, and a whole new world of games and quickly became obsessed with studying game mechanics and systems.

Shortly after that I designed my first game and started researching how to pitch games to publishers. Eventually, I had designed and pitched several games and made some great contacts in the industry, which led to a full-time design position at The Op.

Sean Fletcher: It was something I was always interested in as a kid, but never really moved towards it as an actual career until after I’d established myself as a graphic designer. I got myself into an informal email conversation with one of the designers of Magic: The Gathering about the similarities between visual information systems and game design, and some doors opened up for me to make card mechanics for a set.

After that, I used my experience with Magic and took a job as a graphic designer for a game design studio and worked my way up into full-time game design from there.

How would you sum up your approach to design?
PM: When I worked as a freelance game designer my approach started with mechanics – looking for new and different ways to use familiar game components and even trying to bring new components into games. Now I would say my approach is more theme-driven, particularly because The Op specialises in IP based games.

Our work centres on telling a story and creating an experience through game play. To do that I look for game elements that will create a particular type of tension, or allow for key story elements and try to integrate them into the game play.

SF: I deconstruct other things that I find fun and put things back together in a new, fresh way. I identify a need in the gaming landscape and pull together ideas that help fill that void. 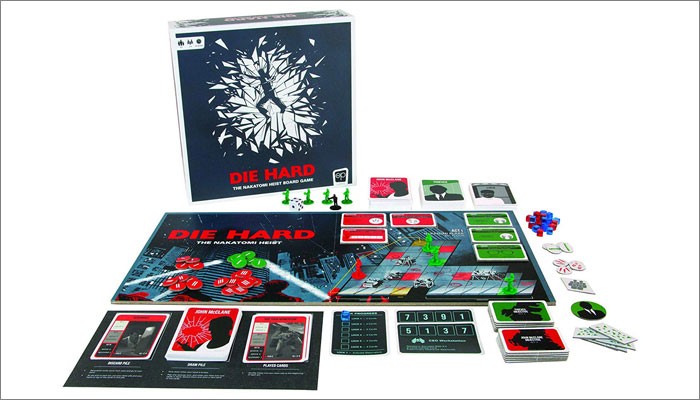 So, Die Hard: The Nakatomi Heist. Talk us through how this project came about – did you start with the Die Hard IP, or was there a crux of a game already in place?
SF: I think we really worked on this one from the top down; the theme came first, and the game mechanics were designed to really re-illustrate the story and its themes.

PM: Yes, this one started with the Die Hard IP. The idea had come up in the office to make a game based on the film, because we felt it had the right amount of nostalgia and a strong fan following – plus it is a great Christmas movie that deserves a great Christmas game!

Once we had the idea to explore the licence, we looked at a variety of games styles that we thought might work. Our first instinct was hidden movement – but we found having John McClane be invisible for much of the game didn’t create the right feeling, but having him as a solo player acting against the rest of the team was spot on for the story. Ultimately Sean “Fletch” Fletcher came up with the main mechanics for both John and the thieves and made each side feel unique, which we found really exciting. 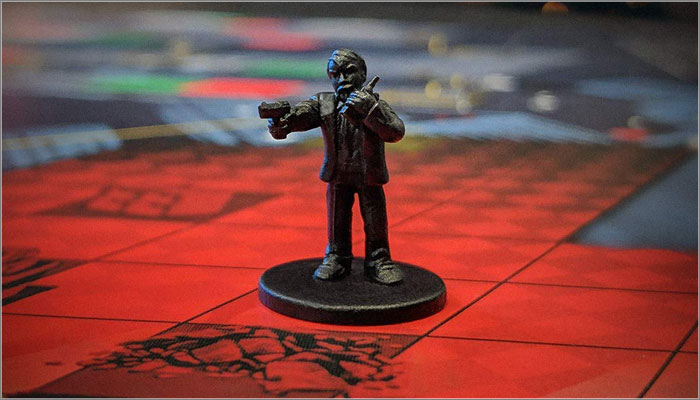 What makes Die Hard ripe for a great tabletop experience?
PM: The story is familiar to a lot of people and the movie gets a lot of replay on cable which means people know and love the quotes and key story points. From a game play perspective, there are two distinct sides in the movie – John McClane and the thieves, and each side has very unique objectives and goals. This lends itself well to tabletop because it creates different strategies for each side and allowed us to play with different mechanics and game play to create unique feelings for the two sides.

The movie also deals with an interesting tension – John is basically on his own and racing against a clock to save the hostages, while the thieves are dealing with the tension of an unexpected hiccup in their plans to rob the Nakatomi Vault. This pressure keeps both sides engaged during the game play as well.

SF: It’s a total fan-service project for folks who love the movie. We worked hard to give both sides something that reflected the characters’ motivations, so playing the game puts players right in the middle of the action in a way that’s really true to the spirit of Die Hard. 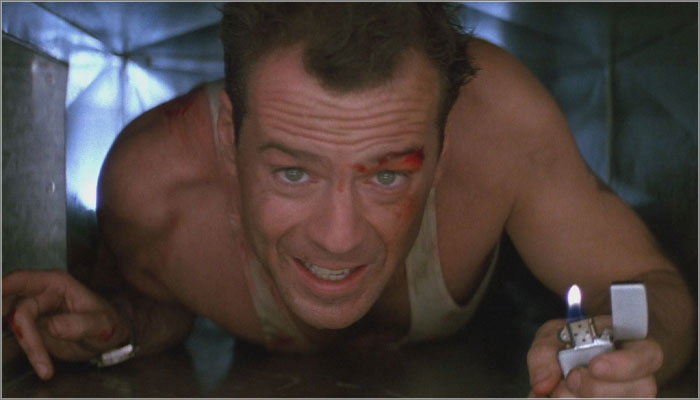 How did you go about choosing which parts of the movie to bring into the game and which parts to leave out?
SF: The game is built around completing goals that line up with story points from the movie. We aimed to include as many of the most iconic scenes and lines from the movie that we could think of, and gauged whether they gave us good goal points in the course of the game. In the end, I think we made the right calls.

Ellis, for example, is one of those pieces of the movie that is memorable, but he’s kind of isolated from the rest of the narrative. He exists to be an obnoxious side-character, and that didn’t really give us much to work with as a central in-game goal. 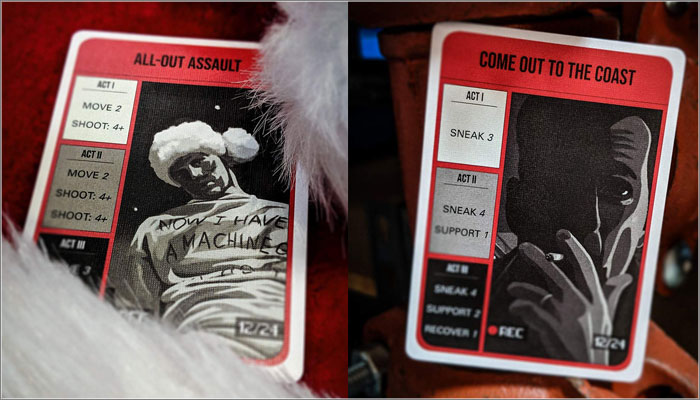 PM: Ultimately, we studied the film in depth, but looked to the fans on our team as a way of gauging what parts to keep and what lines, or moments could be trimmed away. One of the biggest challenges was figuring out how to include Al Powell, who is a beloved character, but primarily supports John from the sidelines. This is where the radio objective and support tokens came into the design. We also looked for ways to include Argyle the limo driver, but found his role in the film was mostly passive and didn’t lend well to game play.

Fan sites and IMDB were great resources for helping us to hone in on the most important and memorable quotes to include on the action cards and objective tiles, and we still use the quotes regularly around the office.

The three-act structure and double-sided board is a really novel idea. How did this present itself in the development process?
PM: Fletch had the idea for the unfolding double-sided game board and three-act structure as a way of solving the challenge that the film follows a rather linear plot. We knew John and the thieves had to approach their objectives mostly in the order they occur in the film for the story to make sense. Fortunately, the action happens on different floors of the building, so the setting changes as the story evolves.

Based on this idea, we initially had a design that used three boards and took up a ton of table space, but only one floor was being used at any given time. Fletch presented the idea that if we only needed one board at a time, we could have the story unfold literally and figuratively but using a quad fold board with three different parts.

SF: We started with an idea for a 3D, multi-floored board, but we saw quickly that it was going to be hard to produce and harder to play on. It then became a series of separate boards that connected to form a larger “blueprint-poster”, but we realized that it took up a lot of space on the table and left large portions unused as the acts progressed. The final solution of printing the floors on different portions (and sides) of the board turned out to be a very organically-evolved answer to the issues we saw in those earlier models. 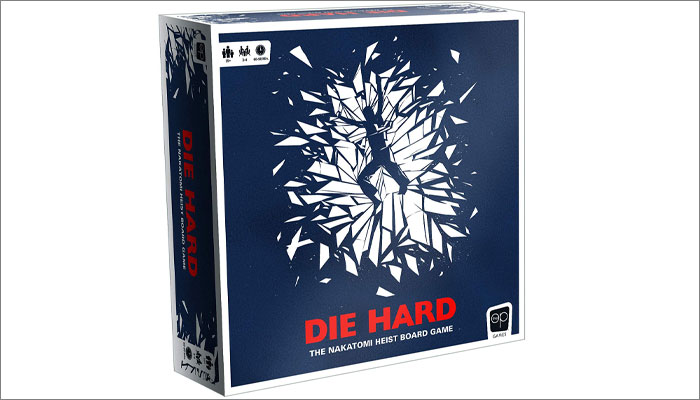 You’ve tackled IP including Harry Potter, Star Wars and Batman – have you got a favourite movie/TV show/other IP out that you’re itching to give the board game treatment to next?
SF: Yes I do, but I’ll be keeping that in my back pocket until the game(s) are ready to talk about!

PM: I already feel so fortunate to have worked with so many major IPs in such a short amount of time, and we are already working on some incredible games for 2020. There are also few upcoming shows and movies that we have an eye on that I am very excited for but can’t talk about yet.

Beyond that I would love to work with some of my favourite animated shows – Gundam Wing or Avatar: The Last Airbender would be a lot of fun.