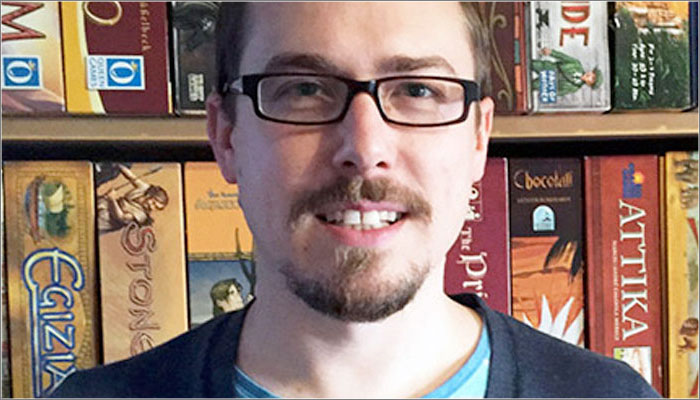 Having enjoyed success with its EXIT: The Game series, Kosmos is bringing a heavy dose of storytelling to the ‘escape room’ genre later this year with its new Adventure Game line.

Co-designed by Phil Walker-Harding (Sushi Go, Barenpark) and Matthew Dunstan (Raids, Roll for Adventure), the Adventure Game series sees players work through a narrative, with each game feeling like a new episode of a TV show.

We caught up with Walker-Harding to learn more about the inspiration behind Adventure Games, and how they differ from the play experiences of previous ‘escape room’ titles. 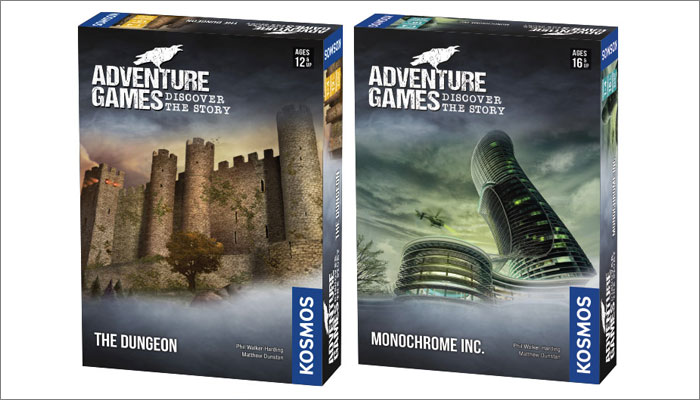 For those who haven’t heard of this exciting new release, what can we expect from your Adventure Games series?
The Adventure Games series is a line of story-driven co-operative games that I designed with Matthew Dunstan. They are published by Kosmos who were great development partners, and the first two titles are called The Dungeon and Monochrome Inc.

In each game, the players are exploring locations, finding items, solving puzzles, and discovering an unfolding storyline. The game is driven by a paragraph book which the players read to progress the story. There are also item cards that the players collect to use on locations or on other items. A full scenario is made up of multiple chapters and the players can pause the game between them, completing the full adventure over multiple sessions.

Some readers will be familiar with escape room games like the EXIT: The Game series. How does this compare? Are they similar play experiences?
They are similar in that they provide a specialised co-operative experience for the players. Like escape room games, each box kind of feels like a new episode of a TV show to discover around the table with your friends. But there are many differences too.

The focus of the Adventure Games series is on a progressing narrative rather than solving puzzles. There are some puzzles in each scenario, but they are not the central play experience. Also, the games are not destructive in any way, so no components are altered. Finally, the Adventure Games take longer to complete and will usually be played over multiple sessions. 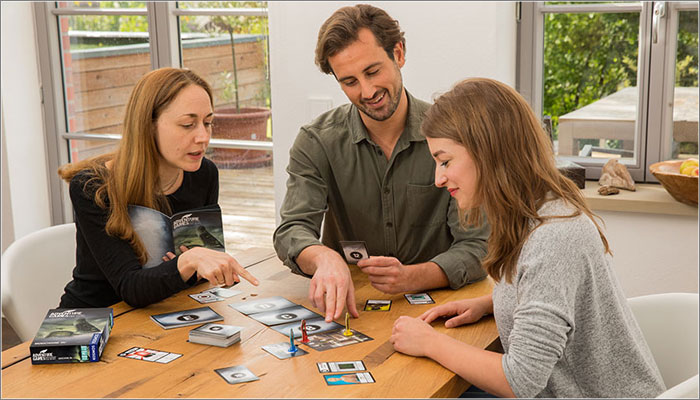 Where did the idea come from for the Adventure Game concept?
Our main inspirations were Choose Your Own Adventure style game books and point-and-click computer games. We set out to create a system that allowed players to freely explore a world and interact with it. It was quite a challenge to generate this feeling of open adventuring within a board game, especially because we didn’t want to go into the direction of app integration. In the end, we did develop an assistant app, but each game is fully playable with just the cardboard components in the box.

Both Adventure Games: The Dungeon & Adventure Games: Monochrome Inc are co-designs with Matthew Dunstan. How do you split design duties on the project?
This was actually the first time I have fully collaborated with another designer on project from the beginning! It was a great learning experience for me, and thankfully Matt and I quite naturally fell into different roles that suited us well.

To begin with, we each produced quite different prototypes to explore how we might make our vision for the game work in practice. We then tested each other’s systems, and in fact, sent both of them to Kosmos. Together, we decided on the version that was working the best, which wasn’t too far from how the core system plays now. Then Matt and I each designed a full scenario for this system.

Matt, who is more into sci-fi, created a cool futuristic heist game. I started with a simple and classic adventure scenario – can you escape from a dark dungeon?

Looking ahead, is this a brand that you see spawning many more titles?
Yes! The third title is already deep into development and will be out at Essen this year. And we have many more ideas for stories we can tell with this system, and cool things we can do with the game mechanisms too. Of course, we need to see how players around the world react to the series, but we are excited about all the adventures we might be able to create!