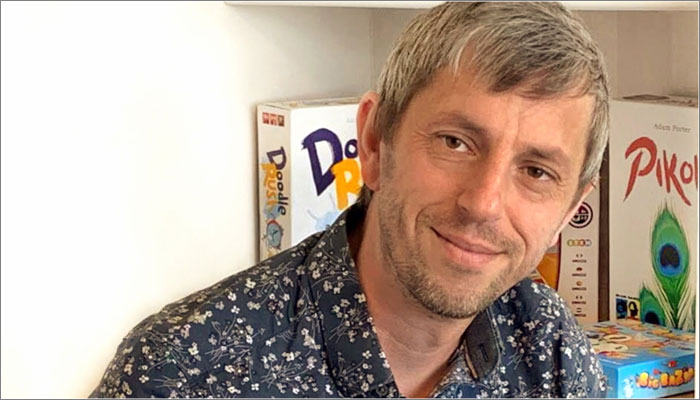 Freelance designer Adam Porter likes to mix things up! His products include board, card and dice games of different genres.

Here he discusses what he finds a chore… And what gets his mind racing with ideas!

For what would you most like to be known?
I’m a big follower of other designer’s games, and I always know the name of the designer of my favourite games. Any game by Phil Walker Harding, Bruno Cathala, or Wolfgang Kramer is automatically on my wish list! But oddly I don’t have a strong desire to be recognisable to gamers myself. I’d rather my games spoke for themselves. I’d like to be known among publishers though; I’d like to be recognised as reliable, professional, creative, and approachable.

As a child, you played Cluedo and the excellent Scotland Yard… With what else did you play?
I often played Gibson’s Dover Patrol, which was a childhood favourite game of my dad’s. If you can imagine Stratego but with dog-eared cardboard pieces, sketched warships, and components thumbed to within an inch of their life, then you can imagine the experience of playing Dover Patrol. 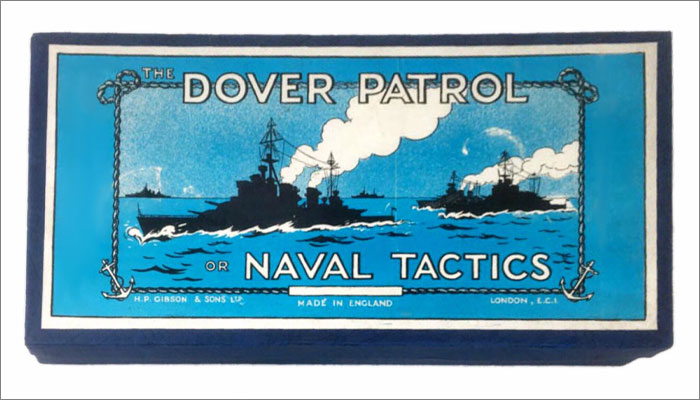 This is the game by H.P. Gibson and Sons? Now Gibsons?
Yes – I guess my dad was quite a gamer in his youth, judging by the wear and tear on the components. I also remember playing tattered ancient copies of Monopoly and Camelot, passed down the generations.

So to what extent did those games influence your designs today?
They didn’t! My designs are far more influenced by games that I’ve played in the past ten years. That said, I do aspire to the simplicity of the mass-market games I played as a child.

Can you give me an example of that?
I think my recent game Qwuzzle demonstrates both of those things quite well. It’s extremely simple to play, chaotic and fun – like my childhood favourites – but it has a robust ruleset, a lot of skill involved. I like to think it stands up as a good example of the sophistication and artistry of more modern games. 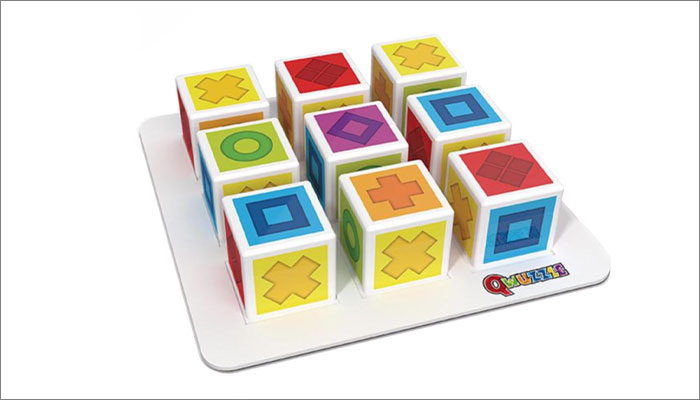 You obviously have an appreciation for tabletop and party games. What are the best and worst aspects of each?
Party games are accessible to everybody. I love introducing people to new games, and party games are the most versatile genre for that. Many people are terrified of playing a strategy game…

You think fear is a real factor?
Definitely. I’ve seen extremely bright people frozen with fear that they might end up looking unintelligent… So I get fewer chances to play this type of game. But I often crave the challenge of a really crunchy Euro. They’re something of an event for me these days – to be savored, rather than binged on.

I might pick up on the fear thing another time – because I completely agree! You’re the first person I’ve heard say that. For now though, how did you transition from game player to game designer?
I’ve always made up games; I don’t remember a time when I didn’t. As a teenager, my favourite game was Avalon Hill’s Wrasslin’ – a card game about 1980’s American Wrestling. I spent hours creating new wrestlers, illustrating new cards and designing role-playing systems for what was a very-simple little card game. I even remember creating a play-by-mail campaign for the game.

At what point did that become serious, then? What was the first game you pitched successfully – and why do you think it succeeded?
It was Big Bazar… Good timing I think. The publisher, Blue Orange, had achieved much success with speed-reaction games, most notably Dobble. I suspect I caught them at a time when they were trying to expand on that success. As it happens, the game came out at the same time as a slew of speed games, and got a little bit lost in the shuffle. 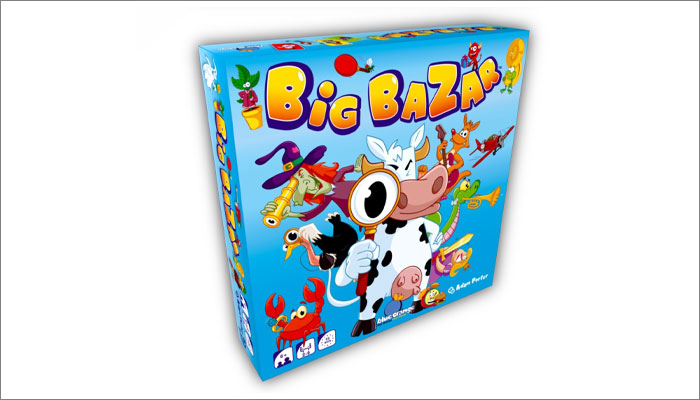 And in terms of your creative process, how do you come up with games?
I come up with ideas when I play games, or when I talk about games. This is one of the main reasons I maintain my Youtube channel…

We’ll just plug that outright: Adam’s Boardgame Wales…
Thank you! So maintaining that and discussing game styles and mechanisms never fails to get my mind racing. I often wake up with a 5am moment of inspiration. I’m also one of the organisers of a playtesting group in Cardiff.

Would this be part of Rob Harris’s excellent Playtest UK?
Yes, our group is part of Rob’s network. We meet weekly and play each other’s prototypes. I also travel to other playtest groups around the UK. Having a regular group gives me a deadline to work to, and helps me maintain momentum.

So how important is it – in your experience – to get feedback as you go?
It’s essential. It doesn’t matter how good YOU think your game is. What matters is what other people think. Personally, I value visual feedback the most. I watch people play and look out for non-verbal clues. I find that more helpful than relying on written or verbal playtest reports. I want to ensure that players are having the experience I intended, and the only way I can make sure of that is to watch them play. 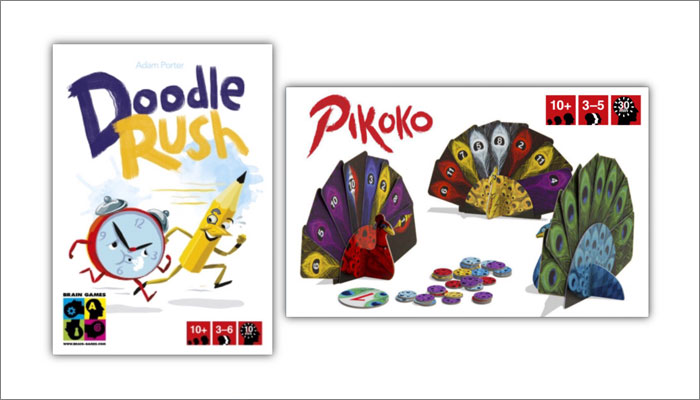 And do you have a different approach toward developing a trick-taking card game like Pikoko, say, versus a silly-social game like Doodle Rush?
Honestly, no. They’re not so different. They both require larger groups – three or more players – and take a relatively short time to play.

Short being defined as?
Doodle Rush lasts exactly six minutes! But I’m defining short as ‘playable in half an hour’. They’re both very social games. Doodle Rush is all about shouting the loudest and demanding attention. Pikoko is about reading other players, predicting – perhaps even a little bit of bluffing. Doodle Rush was quicker to finish because it has so few rules. But the same process was involved. Playtest, refine, playtest, refine… And eventually pitch.

I’m quite tempted to go into pitching here but you recently did a couple of videos about it on your channel. They’re excellent! So if you had to give one tip to designers, what – above all – would you say?
Play lots and lots of games, of all genres. This can get expensive, so go to a game group and play other people’s games. If you aren’t playing new games on a regular basis, then you’re set to fail. 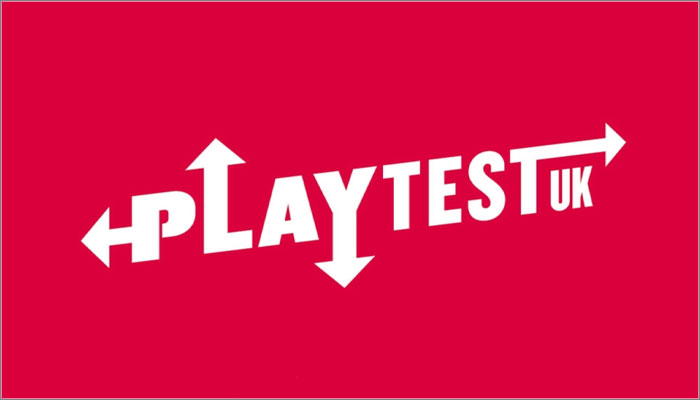 Why do you rate that so highly?
So many mistakes have been made, and so many lessons have been learned by other designers. If you don’t play their games, you’re going to waste time making all those mistakes again for yourself.

Right. And if you could wave a magic wand and make one part of game design easier for yourself, what would it be?
Prototype construction! I find that a chore – particularly when you’re adapting the game after each playtest. I don’t particularly enjoy the “scissors, printer ink and glue” part of the process.

Good answer. I’m going to wrap this up now, Adam, but I want to thank you for your time – much appreciated. Finally, then, let me ask you this: what’s the most interesting object in your office?
Looking around, my eye immediately caught an old book called Impro by Keith Johnstone. Discovering that book was an important moment for me twenty years ago.

It’s an introduction to improvisational theatre, but it had so much to say about creativity, play, spontaneity, self-censorship, and so many more things. I’m quite certain that book has been as impactful on my designs as any games that I’ve played. 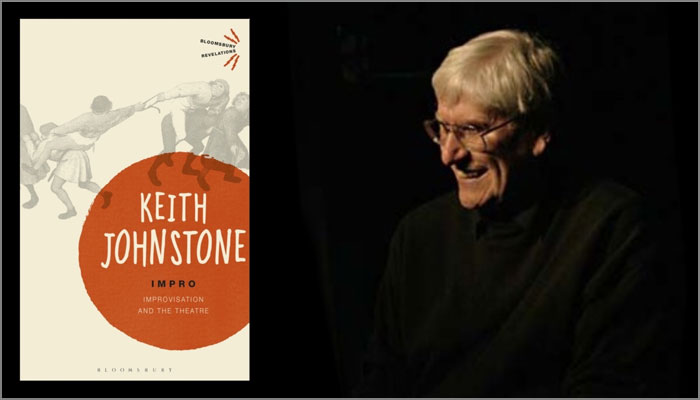 Oh, that’s fantastic! Great answer. Adam, I’m going to come back to you soon and pick up where we left off in terms of pitching and playtesting but for now, thank you so much.