PlayMonster’s Adam Hocherman on his industry pet peeve, three tips on pitching and why he’s on your side 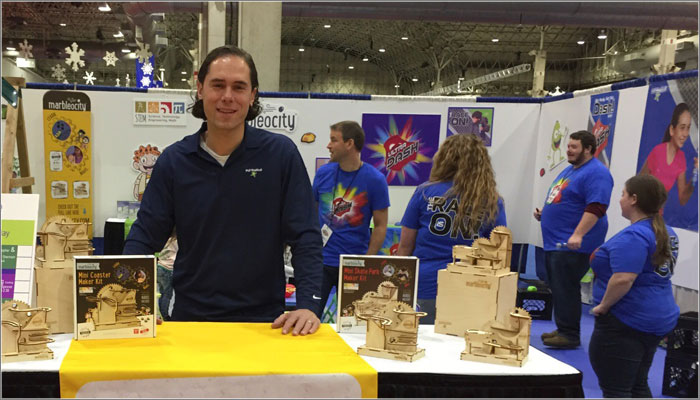 With an extensive range of toys and games, PlayMonster offers fun in ways too numerous to mention.

Their Vice President of New Business, Adam Hocherman, is also an inventor. One of his favourites, the Marbleocity line is an awesome collection of laser-cut, build-it-yourself marble machines.

Here Adam tells us his industry pet peeve, three must-know tips on pitching, and why he’ll never “pass” on an idea. 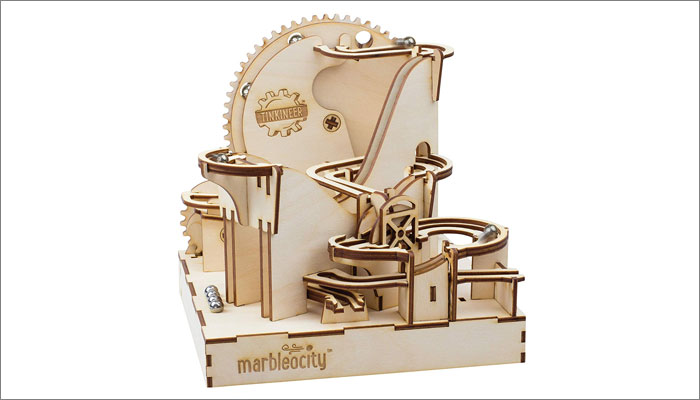 Adam! Thanks for joining us. You’re the Vice President of New Business at PlayMonster. Just one question about that: What the heck does it mean?!
My title was intentionally chosen to be a bit broad and a bit vague. In the toy business “new business” often refers to scouting for and sourcing new product ideas… That describes a chunk of what I do from day to day and, in fact, is how I was introduced to you, Billy Langsworthy, and Mojo Nation more generally.

I also keep an eye out for acquisition opportunities, and piece together creative partnerships and collaborations between PlayMonster and other entities.

Of course, these are the sexier aspects of my job along with some product development responsibilities. I also spend a lot of time negotiating agreements, reviewing contracts, working with lawyers and other related tasks.

You’re a busy man! So when you’re considering products, what is it you’re looking for?
Boy, if I knew that, I wouldn’t have a job! The reality is that it’s quite difficult to discern the next great – and also marketable – idea from the pack. And, of course, great ideas and marketable ideas are often not the same thing… Then layer in the added complexity that, as a company, we don’t specialise in every single category: that further narrows the field.

So draw that Venn diagram in your head – great ideas, marketable ideas, and ideas that are a good fit for what we’re focusing on right now… It’s a pretty-narrow sliver.

You’re looking for all of that in every toy or game?
Yes… And probably one that already has a familiar play pattern, but also that one little thing that makes it special. My favourite recent example is our new game Meltdown – a concept created by invention team Ubi.Q. It’s Jenga… But it’s not. The twist is that what supports the platform on which you’re stacking slippery-little cubes is a special “slow-deforming” putty compound. Laure LeBlanc is into compounds… She combined that with a stacking game-play pattern and – poof! – super-interesting game. 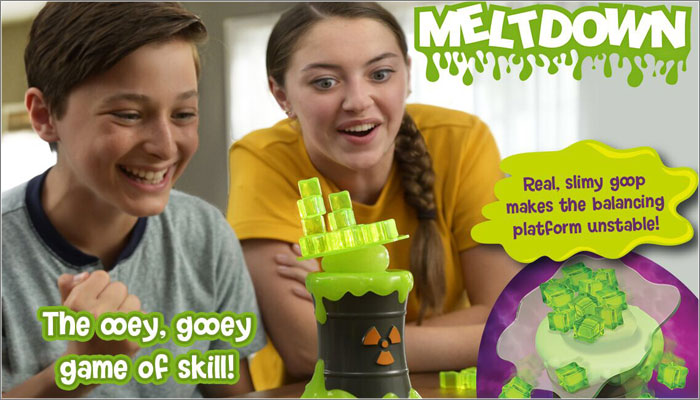 That sounds great! From your inventor-feedback forms, it seems you’re good at dotting i’s and crossing t’s. Why’s that important? Why not just tell inventors, “It’s a ‘no’ from me!”?
Great question. The vernacular isn’t “no”, right?! It’s “pass”… When I got into this role, I hated – and still hate – that term. It’s so flippant. You don’t “pass” on an idea that a creative person put days or years of thought into. You “pass” in a quiz game when you don’t know the answer to a question about cheese varieties.

I wanted to come up with a way to manage large amounts of content-rich information, easily. At the time we didn’t have any kind of inventor portal. So – unpaid plug – I found this amazing tool online called Airtable, combined it with DocuSign and, in a matter of weeks homebuilt an automated system that allows me to manage NDAs, review concepts and video, and disseminate go-forward concepts to my internal team.

Best of all, I can create a relatively rich ‘Disposition Report’ for inventors that’ve taken the time to input concepts – a task I know they’d prefer to avoid – but they begrudgingly appreciate!

That very much feels like the way an inventor would come at it! Of which, you’re in the position of seeing inventors pitch, then pitching their ideas to others. How do you pitch?
I like to make my internal pitch when it’s an easy pitch to make! That partly means it’s easy to pitch a great concept… But the other part of it is just logistics.

Here are some tips for inventors! It’s an easier pitch for me when the hero image is eye-catching, the description is pithy, and – most important – the video is short; 60-75 seconds. It needs to be to-the-point, and capture what the game or toy actually is; how it’s used or played… And why it’s fun. I need to be able to sit down in a meeting, tap a few links and be making your pitch for you.

Wait! That all sounded monumentally important… But that last bit; say that again!
I need to be able to tap a few links, and be making your pitch for you… So if an inventor sends me a WeTransfer link to a 60MB iPhone video filmed in portrait – what am I going to do with that? The answer is, regrettably, nothing. There’s another concept right behind that. We’re on a team – help me out and I’ll help you out!

Right! You’re pitching for inventors, but they need to help you. And in terms of the industry at large, if you could change one thing about it, what would it be?
The “magic” price point of $19.95. Consumers are paying too little for our stuff – not just toys… And although we think we’re getting a deal, I believe we suffer for it.

Twenty years ago the magic price point was $19.95, and so it stands. But, twenty dollars in the late 90s is thirty dollars today. This defies logic! How does it work? Every product – toys, cars or otherwise are built to a price point. If a consumer expects to pay $15 or $20 for a kids’ skill and action game, that’s what manufacturers will deliver…

Feels like there’s a big ‘but’ hurtling towards us…
BUT! There’s only so much you can do for retail at $15 to 20. If the consumer expectation was different, manufacturers would have more budget to work with… We’d make even better toys – with cooler features that we couldn’t reasonably put in a twenty-dollar toy – out of more sustainable materials. In the end, everyone would be better for it because things would last longer and therefore have more long-term value to the consumer.

Strategy games, another category we’re in, have transcended this – they cost a lot more than other games, but for that price they’re beautiful to have and to play. 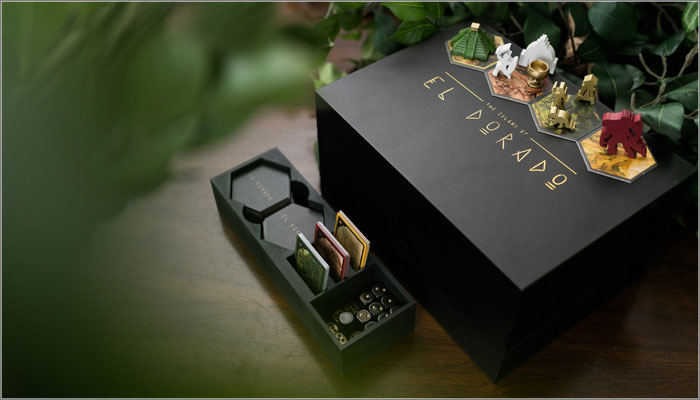 With a distributor’s eye, then, what do you think new game inventors can do to better their chances of getting to market?
An inventor’s path to market rolls through the town called “global sourcing” or “product acquisition”… And by that, I mean the person in my role at any major toy-and-game manufacturer. We look to the invention community to spot trends in the market or to innovate on existing gameplay in ways that we, ourselves, aren’t focussed on. It’s the same reason a company would hire any third-party or consultant. I spend a lot of time, though, reviewing product which doesn’t fit our need, our categories or our vision…

Your time’s taken up by concepts that aren’t close to a fit?
It can be, yes – granted, some of this is on me: I don’t have a crystal ball either, and some of what we’re after I can’t broadcast for obvious reasons. However, I find that the inventors I best connect with are those with whom there is a mutual respect, and an understanding that we’re on the same team… Those who understand that, “Not a fit right now…” is just as frustrating for me as it is for them. The path to success is a collaboration.

In the spirit of collaboration, then, what’s the one question we didn’t ask you in this interview that you think would’ve been great?
What’s your favourite inspirational speech or quotation, and why?

You’re not going to believe this! Adam… That really IS the next question! Go for it…
My favourite speech is John F. Kennedy’s Rice University speech from 1962, sometimes referred to as the Moon Speech. This took place during the space race when Kennedy was using the idea of reaching the moon first as a rallying cry in America.

It’s the “because they are hard” part that really moves me. It’s a really relevant, catch-all reason to do almost anything that doesn’t otherwise have an easily-articulated answer. I feel it’s best applied to interpersonal relationships in the increasingly-tense world in which we live.

Why go outside my comfort zone? Why do something, or get to know someone, that involves putting forth effort? Because it is hard. And for that reason, I am going to rise to the occasion, and I am going to do it.

You caught us off guard there; that was a pretty stirring answer. Your passion is palpable, it’s admirable, and it’s really compelling! Seems a shame to wrap things up, but here we go: what’s the most interesting thing in your office or on your desk?
A few months ago I got a Kickstarted device called a GoCube. It’s an app-connected Rubik’s Cube that first teaches you how to solve the cube, then focusses on the competitive aspect of Cube-solving. It leverages the fact that the Cube is now an interconnected, data-collection device. That, in and of itself, is pretty brilliant.

Beyond that, I’ve backed fifty Kickstarters in my life… Books and board games aside, the electronic tech and gizmos consistently disappoint in their function and quality. The GoCube folks executed it really well.

Adam, thank you so much for making time to do this. That was so interesting; there’s a lot of great advice in there! Thank you.