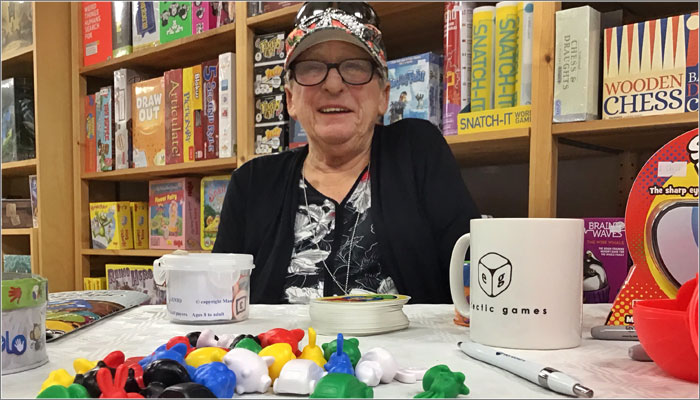 Why is 6 afraid of 7? Because 7 Ate 9. That’s the playground-pleasing pun that inspired the name of a game from Maureen Hiron.

With a number of titles under her belt – including the award-winning Continuo, and the search-and-snatch game Grabolo – Maureen is also the bridge columnist for a number of national newspapers.

We caught up with Maureen at one of her game signings to learn more about her history in the industry, and find out what advice she’d give new inventors. 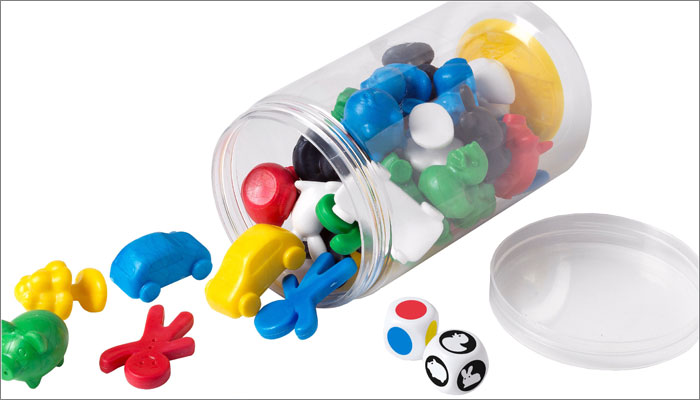 For people new to the industry, can you tell us a little about your background?
From the age of three I played cards with my father. I was always a keen games player as a youngster, getting into chess, and so on. I played bridge; I represented England and Britain playing bridge… But I had no intention of inventing games. I was a teacher; I was the physical education instructor at a London comprehensive. Unfortunately, part of the school fell on my head and I was pensioned off from teaching.

Yes. It was an air-conditioning unit, right, that fell on your head? Sounds ghastly…
That was pretty ghastly, yes. It took two years out of my life at least, because it had the effect of a stroke. Twenty pounds of solid metal smashing down on my head… That was nasty. It broke a blood vessel in the brain; took a long time to heal.

It damaged the brain, but your website says you’re “…able to reason with the intuitive mind of a child, yet retain acquired knowledge and high I.Q.”. So do you think your creativity is a result of that accident? Or would you have come to games anyway?
Well, for quite a while I was very much in a limbo, you know? I was pensioned off from teaching and qualified as a teacher or a tea girl – not too much in the middle. But I think the inventing would’ve happened anyway… Which is just as well because I make lousy tea!

Last time we met, you said, “If you can’t put an idea over in twenty seconds, then you’re dead.” Other than brevity, do you have a pitching strategy?
It’s difficult to say about pitching because I’ve stopped having to pitch. People come to me and ask me for the games, and they usually know what they want.

What is it you’re looking for, then, when you’re designing a game? What’s the magic ingredient in all your products?
Keeping my bank manager happy! I know my target markets. I know what the gap is I’m hoping to plug. And I plug in my brain to what I think I should be thinking about.

So you’re not that idea centric… You’d rather look at the market and see what’s needed?
Of course! Of course; I’m a professional game inventor… Falling in love with your ideas is about the daftest thing a game inventor can do. 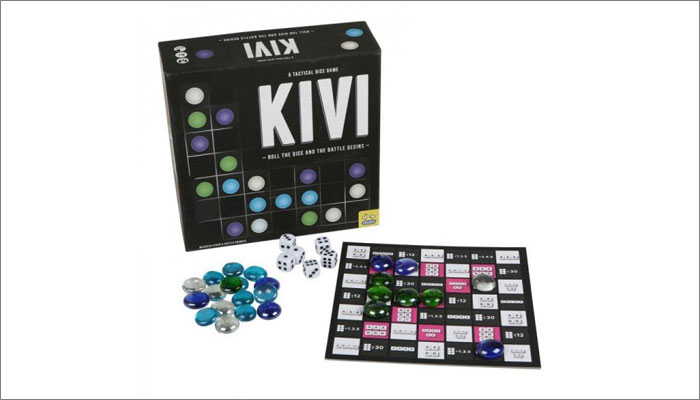 What other advice would you give new inventors?
When you’ve invented a game and when you know you’re going to show it to the major games companies, there are a lot of them that say to you, “Go away and find yourself a games agent; they know which companies want what, and they’ll present them for you.” The problem with that is – first of all – most agents charge quite a lot of money, like a hundred quid or whatever, just to look at the idea… And if it’s not a good idea, it ain’t going to get published. Secondly, if it does get published, you have to give them a massive great percentage.

You’re not a fan of that then! What about crowdfunding? Would you do a game that way?
Interesting question… I actually have a problem game right now; something that I’m having difficulty getting licensed. I’m not thinking about doing it on Kickstarter myself, but I’m thinking about the possibilities. I’m going to talk to a couple of people first… It’s probably the best game I’ve ever invented, but it’s slow. It’s a word game; it’s a silver-market game but no one is recognising the fact that there is a silver market right now… But I think it’s good – better than my Kivi game, which is winning awards.

Kivi is also one of your favourites?
Yes. Kivi is basically a six-dice version of Yahtzee played on a board, which is a very simplistic way of saying it. It’s very good, but this word game is better. 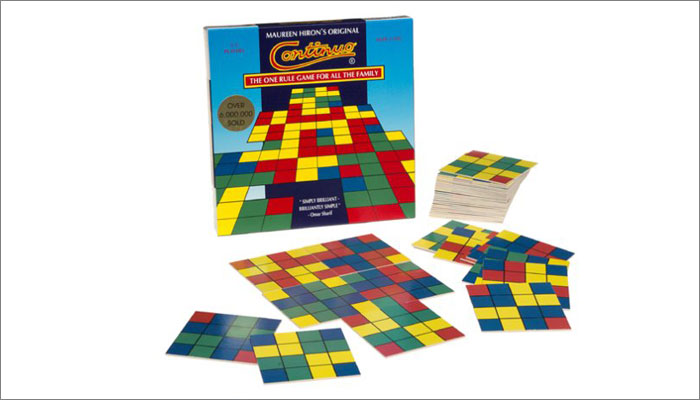 Okay… Your first game, 1982’s Continuo, is known as a ‘one-rule game’. Players arrange card squares to make the longest-possible lines of colour. How did that come about?
I invented the thing in about two seconds. It just came to me. I spent the next two hours cutting up cornflake packets and making the squares, filling them in with colours. My husband and I formed a company the next day. Continuo went into shops on September 1st; six weeks later it was the U.K.’s bestselling game By Christmas, we’d sold 205,000 sets in the U.K. – today, it’s in over 50 countries; it’s now sold six million sets, which ain’t bad. That includes its offspring. It’s not quite so popular at the moment; it just seems to have slid downstairs at the moment. Don’t worry, it’ll come back; in fact so much so that I’ve just licensed two games to South Korea – and those two are Continuo and Duo.

7 Ate 9 you’ve just licensed in the U.K. – but that’s already a bestseller in the U.S.?
Yes; it’s been out there ten years, maybe; maybe a bit less. Maybe eight or nine. But because of that big sell out from Out of the Box to Mattel, I had to invent some games quickly for Out of the Box – and 7 Ate 9 is one of them. 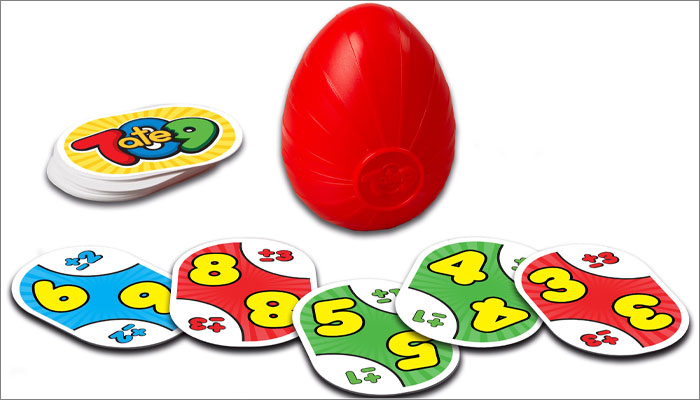 How did you come up with that idea?
My friend and I had gone to play bridge. The existing playing cards at the bridge club were really old; they looked like slices of bread! So I went to put new cards in the duplicate boards. That’s a fairly mindless job – my mind wandered. I found an idea forming, so I took a few old packs into the back room, extracted what I needed… And 7 Ate 9 was born.

As well as being a game designer, you’re the author of a number of books, notably on trivia and bridge. Does writing need different disciplines?
Writing is more like hard work! I’ve got six national newspaper articles to write each week, so it’s – what? A couple of hundred articles a year? But game ideas are easier. I could invent a game a day… But they’d be a right load of crap!

Ha! You’ve spotted the flaw in that plan?!
This is the point. I’ve got to invent games that I know the public want to play. And that’s the tricky bit! Not the having an idea in itself.

So, with the newspaper columns as well, let’s see: you’re an inventor, columnist, author, world-class bridge player, trivia expert, T.V. consultant, and published music composer… We’ve got a feeling if you took up fishing, you’d catch a whale! Professionally speaking, though, with which one thing would you most like to be identified?
It’s got to be the games, hasn’t it? Because they say I’m the world’s number one woman game inventor of all time. That’s quite a nice accolade to get. So yes, it’s got to be that, because I don’t just invent. I set myself a target where I want to see the next game being; where the gap is and what’s popular.

Okay! We should wrap this up, Maureen; the biscuits are taking a hammering, look… The whole top tray’s gone! So last question: what’s the most interesting thing on your desk?
The most interesting thing that on my desk?! There’s so much rubbish on it, I have no idea! Until a little while ago, though, it would’ve been my cat. It didn’t matter what I was doing, Zippy would always come and sit on the desk; they’d be an awful lot of fur between me and the screen.