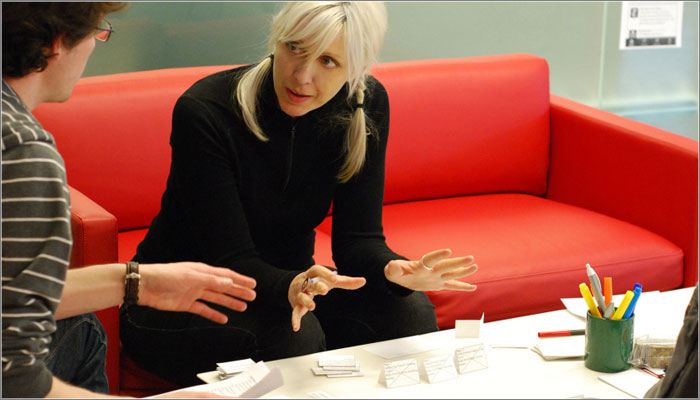 As Resonym’s latest game – Ghost Writer – lands on Kickstarter, we caught up with Mary to find out more about the spiritualist inspirations behind it, and the challenges involved in bringing innovation to word games. 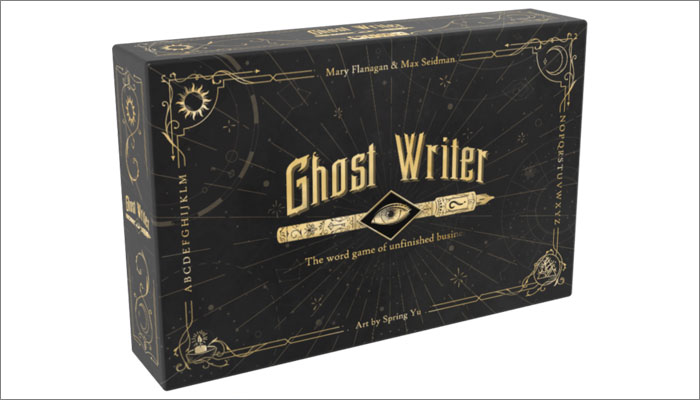 Mary! Always fun to catch up; you have a new word game that’s just landed on Kickstarter called Ghost Writer. Tell us what it’s all about?
Hi Billy! Yes I’m really excited about Ghost Writer.

Players play in teams, and each team has a Spirit and a renowned Medium on it. The Spirits from both teams pick a Secret Object and try to communicate it to the Medium players.

Mediums select question cards about the object to ask the Spirit, and the Spirit writes out a clue until their teammate Medium calls “Silencio!” Since the opposing team can also see the answers, being somewhat cryptic and clever in giving clues is key to the game. Spirits can’t be too obvious because the other team’s Medium might figure out the Secret Object first!

Sounds great – where did the first seed of an idea for Ghost Writer come from?
Ok, first the background. I found a drawing of cats having a seance on the internet – of course – and it reminded me about how much I love 19th Century spiritualist stuff. You know… Seances, fairy photography, photographic “evidence” of ghostly beings…

My grandmother’s house was not far from a – still functioning – spiritualist camp, where people would go to reconnect with lost loved ones, and I went to one of their sessions as a teenager.

Wow! What was that like?
It was a trip! The movement has its roots in 19th Century thinking, and 19th and early 20th spiritualist evidence was all, or mostly, proven to be fake, but it is fascinating to know that scientists were investigating this stuff seriously.

Even renowned cultural figures like Sir Arthur Conan Doyle were firm believers in spiritualism and held seances. Did you know that in 1924, Scientific American magazine offered a cash prize to the first medium who could produce ‘conclusive psychic manifestations’ under test conditions?

I didn’t know that!
Here’s another one for you! Famous escape artist Harry Houdini made it his project to debunk claims that spiritualists communicated with any spirits whatsoever. Houdini and others campaigned against spiritualism and this eventually resulted in the 1926 United States Senate hearings to consider the problem of fraudulent mediums!!

Wow – and to think now they have their own TV shows! So, the theme was right there from the off with this game?
Absolutely! Then our team started the game design using a Ouija board to spell out each letter of the clue. It was awesome! But there were problems, such as all players being able to see the correct letter and keeping track of the clues.

Our ‘ghostly writing pad’ included with the game was the best option for both giving clues that everyone can see and recording those clues. It was a real adventure to design a game, start to finish, with our distributed team using online tools for what was to end up being a paper-based board game – but it worked! 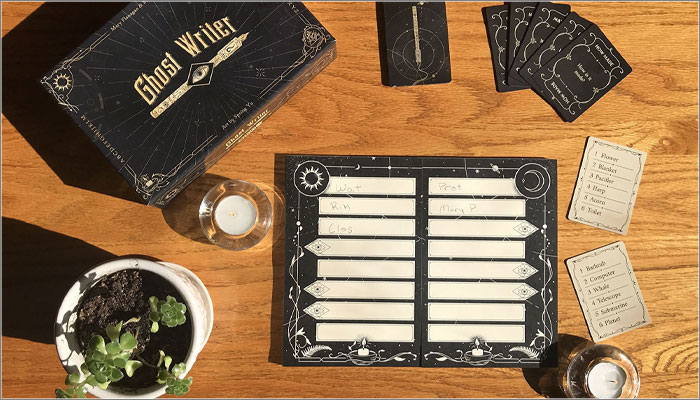 The ‘word game’ space is filled with so many titles, and yet – as Ghost Writer proves – there is still room for smart, playful innovations in this category. What is it about the ‘word game’ space that makes it such a rich playground for game designers?
Word games are hard to design afresh, and it is so thrilling when you land on a novel mechanic! I think there are several things that make them a perennial favourite.

First, most word games are easy to learn and language is something we have in common. Second, there’s typically a clear way to come to a definitive ‘answer’ – dictionaries are handy rulebooks! And finally, word games match how we think… How many times have you drawn a blank as to the right word for something, and then it comes to you? That ‘aha!’ moment works well in games.

Absolutely. And were there any big challenges involved in creating a word game?
The most difficult part is making a game that is complex enough to replay and employ strategy, but easy to learn and teach your friends. That’s the sweet spot we try to hit with all of our Resonym games. It’s a constant push and pull between simplicity/boring and complex/crunchy.

This is how my co-designer Max Seidman and I balance each other out. We aim to create cerebral yet “easy to pick up” games, and that can be interpreted very differently, depending on one’s perspective.

Well it looks like you’ve nailed that balance with Ghost Writer. Now before I let you go, how do you stay creative? And has the pandemic changed how you fuel your creativity at all?
In addition to running Resonym, I’m an artist, and making things like art installations. Right now I’m working on a feminist artist-artificial intelligence and I did a daily digital drawing project that’s a memorial to people lost to COVID. I also write. For me, having parallel practices invigorates the ways I think about games.

During the pandemic, our team really missed our in person, arm-waving, jumping up and down brainstorms, but we figured out how to be creative together online. Max likes to pace when brainstorming and so his pacing had to get smaller in his flat. We also missed playing board games with friends, visiting board game cafes, meeting players at Gen Con and other conventions — all of it! Here’s hoping we can be in-person soon!

Fingers crossed. Well a huge thanks again Mary – great to chat. And anyone interested in checking out Ghost Writer can find it on Kickstarter here.