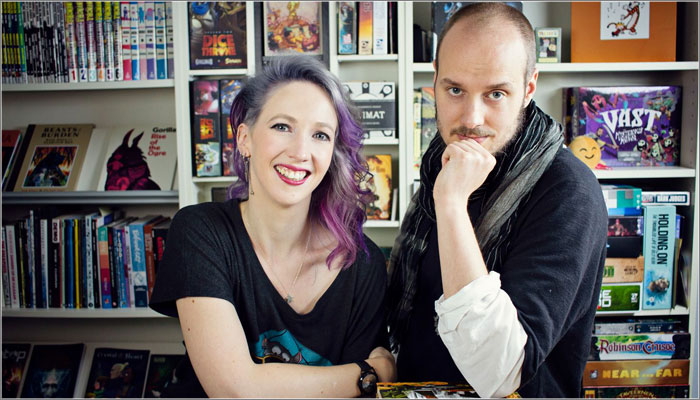 Semi Co-op is a weekly web-comic focused on celebrating the world of board games.

Created by Rachel Kremer and Heinze Havinga, Semi Co-op has evolved over the years to also encompass sponsored comics, with publishers keen to celebrate their launches through the pair’s quirky, funny filter.

We caught up with Rachel and Heinze to learn more about the origins of Semi Co-op, and why comics is a perfect vehicle for celebrating great game design. 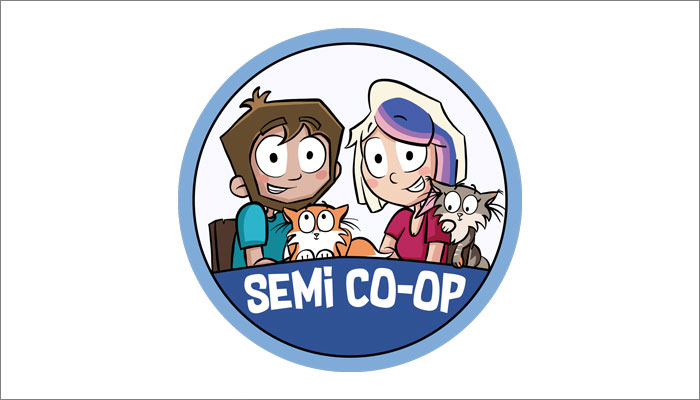 Hi guys! Welcome to Mojo Nation… So Semi Co-op is your brill weekly web-comic centred on the world of board games – what made you start it?
Rachel Kremer: Well, I’d always been illustrating but I was never really into cartoon drawing, and so I wanted a project that would force me to practice drawing cartoons. I could’ve followed a tutorial but I know – for me – I’d do a few and then that’d be it… I don’t think it’s the best way to learn something.

In Dutch, we have a lovely saying: ‘a stick behind the door’, which is another way of describing a reason to do something. So I thought, let’s start a web-comic!

Was board games always going to be the focus?
RK: Well I thought about what it could be about and considered a general geeky theme, or looking at digital games, but then some marketing lessons from university kicked in! That’s when we thought about focusing on a niche, and we were into board games at that time, so that’s where it came from – and it gave us a good reason to play more board games! But we didn’t have a plan for it really.

Some weeks the comic will focus on you guys, some will focus on designers. How do you decide on which area of the board game world to focus on each week?
Heinze Havinga: We try and find things that people can relate to. Sometimes we focus on things we want to talk about and we don’t care if people don’t understand them, because this one might be for us! But we try to find broader concepts in what we play each week that we know people can relate to – and then we build a comic around that.

The most important thing is that we want to celebrate games. Even though we make fun of it sometimes, it comes from a place of love and respect and enthusiasm. We never want to make designers or publishers feel bad by one of our comics!

I think that comes across! I saw one of your recent comics focused on celebrating a great rule-book. That In its own way both champions a publisher, while also suggesting the wider industry could do better when it comes to rules.
HH: Exactly. Sometimes you’re in ‘convention mode’, and you’re reading lots of rulebooks and trying lots of new games and you’re tired, and a few games will jump out because you open the rules and you’re pleasantly surprised! ‘Oh, this is a really good rulebook!’ We had that with Lost Ruins of Arnak by Czech Games Edition at Spiel last year. It was virtual so we received lots of games, and Arnak was a big box, so I thought it could take a whole day to get through, but I read the rules and we were good to go – and that’s a weird experience! 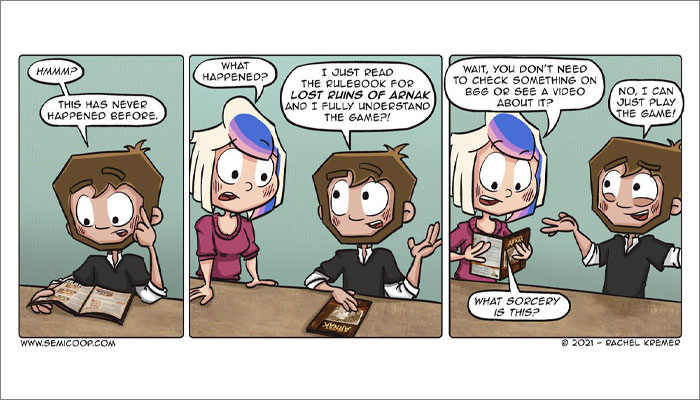 We noticed a few other people noticed how good Arnak’s rules are, so we wanted to celebrate that. Especially because the week before we had published a comic that was focused on rules that are not as easy to grasp as they could’ve been! But we wanted to give Arnak as a spotlight as an example of a game with great rules.

You also work directly with publisher with sponsored posts. How can publishers work with you on comics?
RK: We offer publishers a choice – they can come to us with an idea for a comic and we can brainstorm around it, but often a publisher wants to us to think of something. We’ll get a few points, like ‘could you highlight this aspect of our game?’ But they will specifically ask that the comic does not resemble an advert – they want it to still be a fun comic. 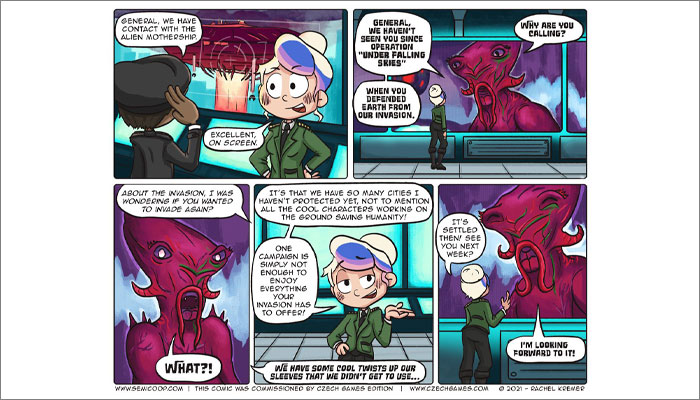 Delving into your creative process, what do the first steps look like when you’re putting a comic together?
HH: It’s an ongoing brainstorm at all times! We live together and especially as I now work from home – I usually work at the university – throughout the day we’ll talk about ideas or directions we have for a comic. It slowly starts to form over time.

RK: Yes, often we’ll have an idea and two weeks later, when we play a game, we realise the comic that it could go in. We also tend to write down initial thoughts in a Google doc.

And those thoughts can be words, one liners…
RK: Yes! Always very short, like one sentence. At a later point we’ll take that and build a comic from it. 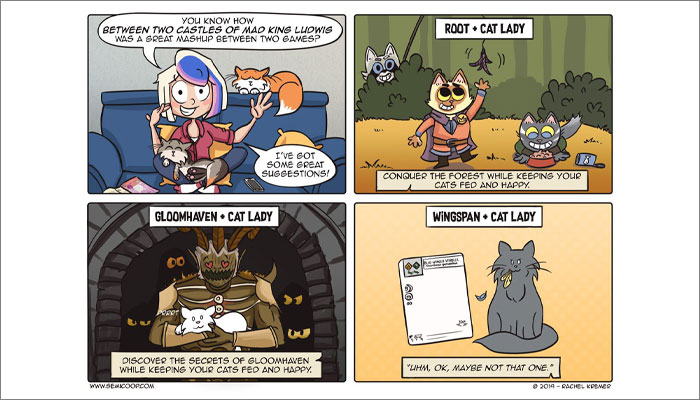 I remember that joke was in the document for about six months. It was a funny concept but we didn’t have the punchy finale for it. Then, all of a sudden, Wingspan became very big and that was the perfect punchline!

What are your thoughts on mass-market games? Would you be open working with mass-market firms on comics?
HH: We would welcome the opportunity, absolutely!

RK: One of the things we love to do at Semi Co-op is to introduce new games to our audience, and that would be a perfect example of that.

HH: Big Potato is a good example. I love their games and I love their approach to marketing. We have a good relationship with those guys because there’s a mutual appreciation of what we’re doing. And if people say that party games are not ‘real’ games, I’m disappointed. Why would you limit yourself away from those kinds of fun and interesting experiences?

You have a strong following and a recognisable style, so could you see Semi Co-op launching its own products, like published print comics?
RK: We’ve been doing Semi Co-op for almost 6 years and art-wise, we’re at a point where I think it looks good enough to do that. We’ve been playing around with product ideas and we already sell t-shirts through Threadless.

HH: Yes, we’re interested in it but we don’t have the experience and time to properly figure it all out! But there’s definitely potential there.

RK: We are actually planning to publish a book with our Sketchies comics – these are black and white comics that are a little bit more accessible. We think that book could be a fun product for lots of board game fans.

But I suppose that’s taken a backseat during lockdown?
HH: Yes, now it’s just the two of us! There’s lots of games we’d love to explore with more people but right now we can’t.

Yes, fingers crossed we can all back around the table with friends soon! Now, before I let you go, my last question is about how you choose what games to profile in your comics. So many are launches every week, so how do you balance featuring the big hitters with games that are smaller, but you feel deserve an audience?
HH: It’s a bit of a tight rope walk! If we are the very first to talk about a game, it’s tough to get the conversation started. It’s hard to make a comic about relatively unknown games, especially if the content is about how it’s played, because most people won’t have played it! What we tend to do is feature those kinds of games in comics where the game itself isn’t the focus. 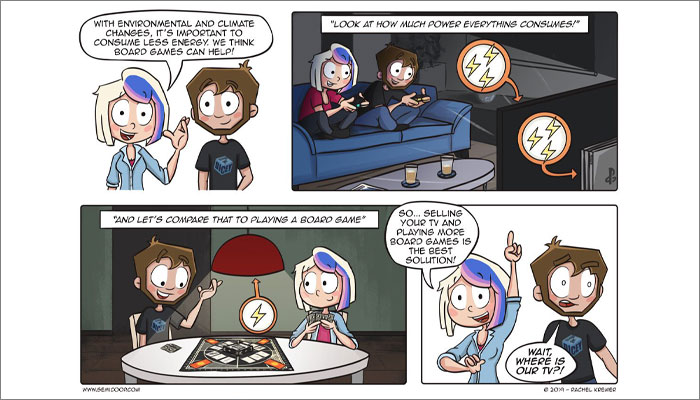 That’s great! I’ll add Illimat to my list! Well a huge thanks for taking time out for this guys! And good luck for the rest of this year with Semi Co-op.