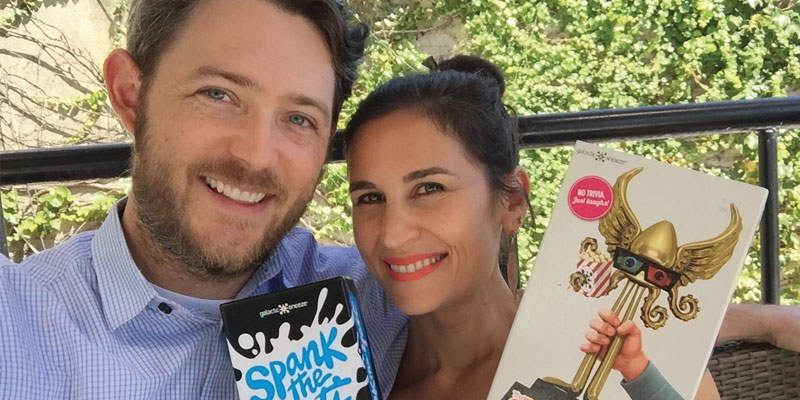 The firm’s first game was Schmovie, an adult party game that sees players win trophies for making up funny movie titles. The firm re-lauched the game in 2015 with a lower price, smaller box, bigger trophies, better markers, and a broader age grading to make it more family friendly.

Last year saw Galactic Sneeze lift the lid on their second game, Spank the Yeti. Returning to their adult party game roots, the game (for ages 18 plus) sees players attempt to correctly predict how their friends react to a series of questionable dilemmas.

As the firm readies for this month’s release of a second print run of Spank the Yeti and its first expansion, we caught up with Farber and Wilson to chat Kickstarter, party games and their collaborative design process.

How did you both get into the world of game design?
Sara: I’ve been developing content for interactive toys and games for about 17 years. I started with Sesame Street CD-ROMs back in the Nineties (when CD-ROMs were still a thing), headed up the content design department at Fisher-Price, and then ventured out to consult for a bunch of companies including Hasbro and Spin Master.

Bryan’s background is as a creative director in advertising – he spent years creating campaigns for global brands including M&M’s and AT&T, and has collaborated with companies such as Disney, DreamWorks, and Marvel. Since we first met, we knew we’d someday join forces to create our own playful products.

We founded Galactic Sneeze in 2010, just months after getting married. We initially set out to pitch concepts and license them, but soon discovered that unlike toys, board games were a thing we could manufacture and promote on our own. And once we had one game on the market, we got the itch to make more. The next thing we knew; we were an indie game publisher.

How does the development process work, in terms of collaboration between you both?
Sara: Typically, one of us spends a day ideating at a coffee shop with a notepad and comes home with a handful of game ideas. That person then creates a rough playable prototype frankensteined from index cards and parts of other games, and then pitches it to the other person. If it’s fun to play, unique, and we both like it, we’ll start working on how to make it better.

We’ll develop the theme, branding, and give it a great name. We’ll then embark on countless hours of play-testing… followed by more play-testing.

Bryan: Once we’re ready to bring a game to market, we have specific roles with complementary skill sets. Sara leads the game content and rule-writing. I do all the illustrations, graphics, and design. That’s not to say Sara doesn’t have design ideas and I don’t come up with content for cards, but we each have our area of expertise.

Sara: We also both handle social media. I do more of the Facebook and Twitter posts, and Bryan handles our Instagram. We host a Schmovie Twitter hashtag game every Monday at 11am ET, and whichever one of us has less other work to do will typically run the game. We’re always trying to think of fun new ways to engage our fans online. 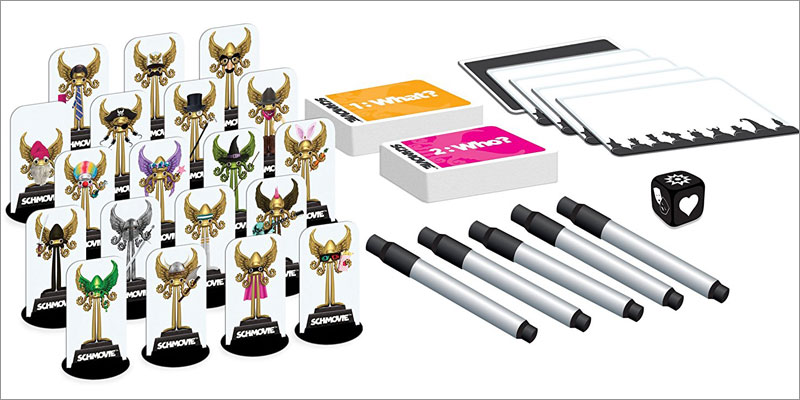 What do you think is key to a great party game?
Sara: At Galactic Sneeze, our tagline is ‘Contagious Concepts’. And we believe a great party game should be contagious: you play it, love it, and tell your friends about it. When we meet Schmovie fans, they often tell us about a funny Schmovie title they came up with months ago that they’re still laughing about with friends. The goal is to create a game that people want to share pics or videos of on social media because it speaks to them in some way. A great party game creates laughs and lasting memories… and sometimes embarrasses you in front of your mother.

Bryan: A party game should be easy to learn and fun to play. I like games where there’s supposed to be a winner, but everyone is having so much fun playing that nobody really cares who ultimately wins. For me, the best party games allow people to hop in and out. You can play a few rounds, go on a beer run, and then hop right back in when you get back. Can you talk us through the design process behind Spank the Yeti?
Bryan: The adult party game category is getting crowded quickly, so we needed a unique game mechanic, hilarious content, and a box that jumped out on shelf. We tapped into the power of our social media network, conducting Twitter polls to include folks in our content choices, and sharing graphics on Facebook for our followers to vote on.

We liked including ‘Yeti’ in the title, but were careful not to make it feel like a yeti-themed game. We purposefully didn’t include a graphic of a yeti anywhere on the box. But, we do offer a downloadable paper yeti on our website that players can use to keep track of whose turn it is. We also hired an actual real life Yeti as our spokesperson. Or rather… spokesyeti. 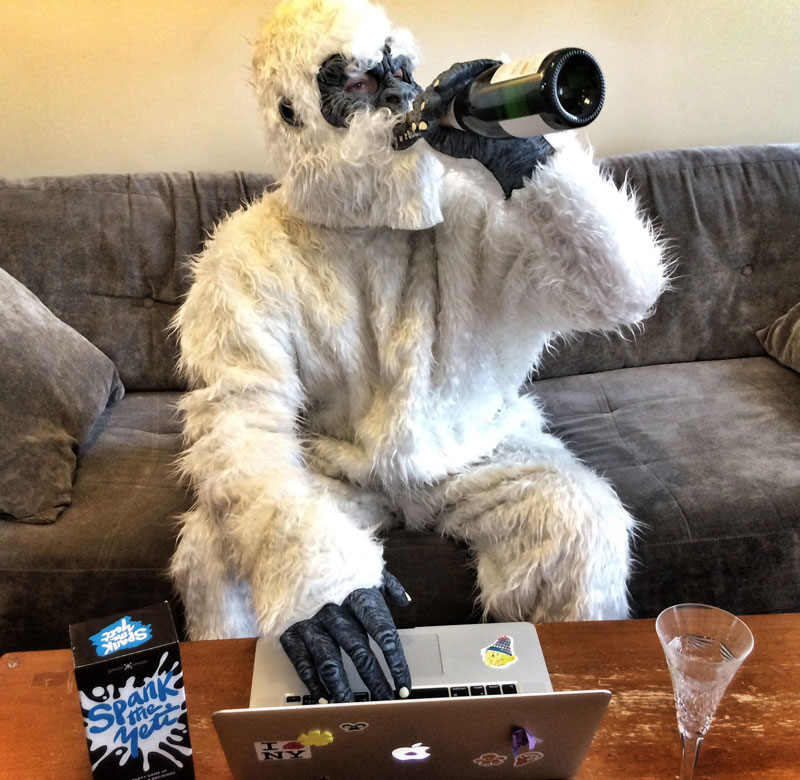 Sara: It was also helpful that we had a deadline. We knew we wanted to launch the game on Kickstarter last June, so we had a finite amount of time to get the game ready for our campaign. Deadlines are good. A game could always be funnier, or have sharper graphics, or a wittier blurb on the back. But at some point, you just have to stop. We have a multitude of things to juggle, so we work well with deadlines.

Did you do anything differently from when you published your first game, Schmovie?
Sara: Yes, definitely… on multiple levels. The biggest difference is that we crowdfunded Spank the Yeti on Kickstarter. It’s nice to pre-sell product before it launches to have some financial help with the production. However, what we found to be even more beneficial is the community you build on Kickstarter. We had passionate supporters who provided us with input and encouragement, which goes a long way.

Bryan: Also, we were more prepared for how much work it would be to manufacture and promote the game. With Schmovie, we thought the hardest part would be designing it. Then we had a warehouse filled with games and realised the work had just begun. This time we knew what we were getting into.

What are you working on next?
Bryan: Our second print run of Spank the Yeti and our first expansion, the Geek Pack, hit stores this month. We’re already working on our next expansion pack, which we plan to follow with many more. If your readers have any suggestions for future themes or cards, we’d love to hear them! Please feel free to reach out at achoo@galacticsneeze.com.

Sara: We don’t have the bandwidth to self-publish everything we come up with, and we’re excited to partner with larger companies on new projects. We recently licensed a few new concepts that are scheduled to launch in 2018. At Galactic Sneeze, there’s always something fun in the works.